CodeNewbie Community 🌱 is a community of 11,630 amazing newbies

In 1992 America Online (AOL) went public. In 1993 they started mailing compact discs to households to attract new members and get them online. In 1995 they reached 1 million members. A year later that number surpassed 5 million. For the next decade, AOL would become a household name and one of the primary access to the online world. Chills.

What made AOL so spectacular and revolutionary was that it allowed its members to complete any task virtually without having to get off their chairs and leave their homes. Need to buy flowers for mother’s birthday? AOLs got you covered. Need to book plane tickets for your next trip? AOLs got you covered. Need to take your kids to the library to research dinosaurs? I think you see where I am going with this. But don’t take my word for it, check out AOL’s awesome 1995 commercial!

Connecting to the internet through AOL was not without its drawbacks, however. First off, it would require access to and use your phone line which meant households could not make nor receive phone calls. The process of connecting to the internet projected a loud banshee-like shriek that made you cringe, formed goosebumps over your body, and sends shivers down your spine. Also, every so often you would be “kicked off” the internet due to an incoming call. And to top it all off, the company required its members to pay to go online and buy access in hourly increments. But just the sheer endless possibilities the internet provided made all those minor inconveniences well worth it.

But what exactly was AOL? For the longest time, some people believed AO itself was the internet. It had “online” in its name and people used AOL all the time, so it made sense. But I believe my mentor, Derek Wood at Perpetual Education, explained the reasoning behind it best in one of our class lectures:

“AOL coupled their service with a robust ‘home page’ experience that felt so all-inclusive, that many people thought AOL was the internet. It had everything they needed – and many people paid for AOL long after they stopped using the internet service part. They just felt so used to it. But – in many ways – it was basically just a web page.”

This is what AOL’s portal looked like in the mid-’90s: 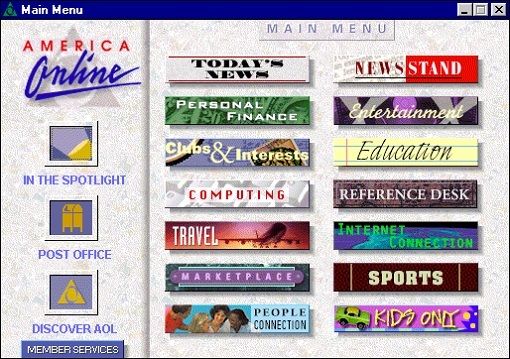 It really was just a web page that acted as a portal to everything its members may want and need. Whether it was completing those aforementioned tasks, searching for today’s news, connecting with other online members, finding out local showtimes, or reading the hottest sports news and celebrity gossips, all of that could be accomplished with a simple click via the AOL portal.

Our lesson today featuring American Online made me think about my personal use and relationship with the service and just how amazing it truly was. It helped shape the way many search engines and websites are created and utilized today and has a rightful place in the technology history books.

Razor Pages - How To Upload Images In MSSQL Database

Day 50: Reflecting at the Halfway Point

Once suspended, alexv0ng will not be able to comment or publish posts until their suspension is removed.

Once unsuspended, alexv0ng will be able to comment and publish posts again.

Once unpublished, all posts by alexv0ng will become hidden and only accessible to themselves.

If alexv0ng is not suspended, they can still re-publish their posts from their dashboard.

Once unpublished, this post will become invisible to the public and only accessible to Alex Vong.

Thanks for keeping CodeNewbie Community 🌱 safe. Here is what you can do to flag alexv0ng:

Unflagging alexv0ng will restore default visibility to their posts.