We continue our C++ tutorial series. If you haven't read the introduction, click the link below.

All variables to be used in C++ must be declared and introduced to the program before they are used. During this declaration, the data type of the variable must also be determined.

The basic usage is shown as:

The basic data types commonly used in C++ are:

They are used to define Integers
<int> |<long>|<short>

They are used to define decimal numbers

Each character occupies 1 byte of memory.

You can review the table below for the data types used in C++. 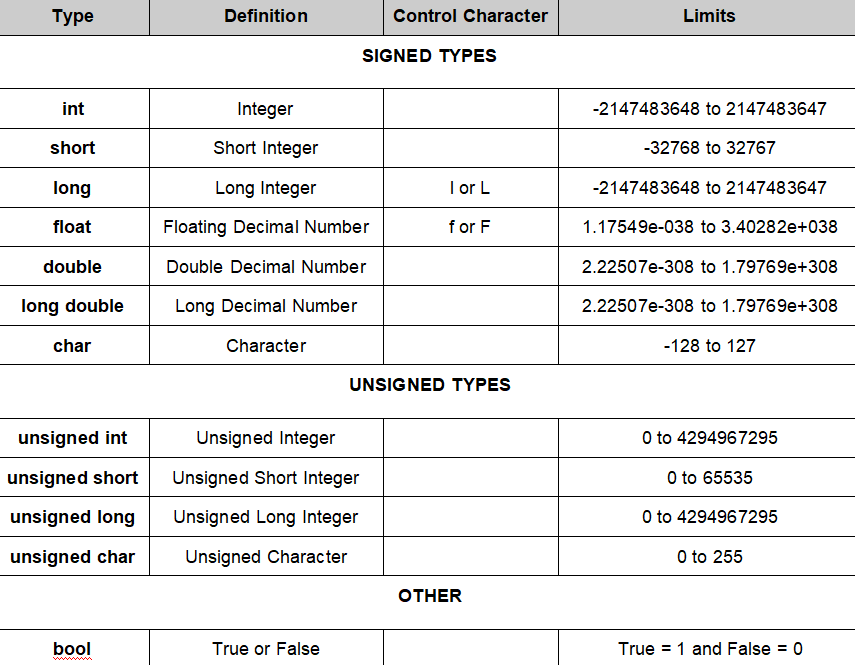 To declare the data type of the variable to be used in C++, a definition is made as follows:

It is possible to change the content of a variable by assigning a specific value anywhere in the program. Often, however, the data type of the variable is determined from the outset, while it is desirable to have a value as well.

If we are going to use more than one variable in our program, we can define these variables by writing them side by side, provided that they are of the same type.

Lines where the variable data type is declared, of course, again ";" must end with.

There are some important rules to consider when defining a variable name in C++.

All three of the above statements describe different variables. Therefore, we must be very careful when using lowercase and uppercase letters in variable names. 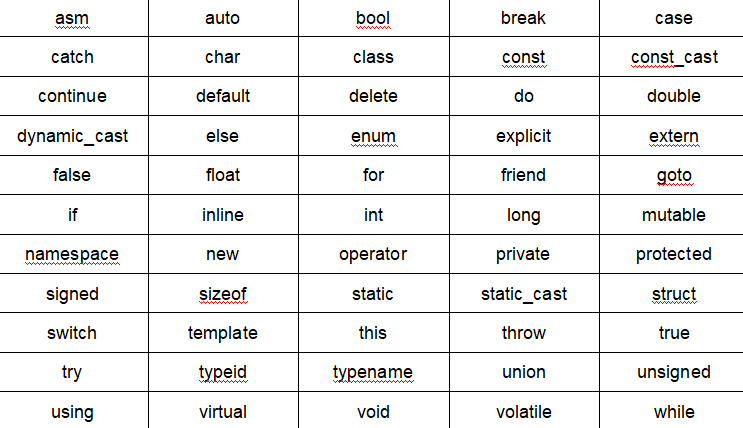 If there is more than one function in the program, it is the type of variable that can only be valid in the function it is defined in. Such variables must be enclosed in { } signs that indicate function boundaries.

It is the variable type that can be valid in all functions in the program. Such variables must be placed outside of the { } signs that specify function boundaries.

When a locally defined variable in a function is required to remain constant and not change if the function is called repeatedly as long as the program is running, that variable should be defined as a static variable.

Constants are program components whose value does not change from the beginning to the end of the program. Constants with the following data types can be used in C++:

There are three types: 'int' (integer), 'short' (short integer) and 'long' (long integer). Let's take 1995 as an example and explain the job of defining the type of an integer in this example.

To indicate which type a constant belongs to, a character is added to the end of that constant to indicate its type. If a numeric expression does not have any characters at the end, the type of that expression is 'int'. In this case, the expression 1995 in our example is an integer of type 'int'. To designate this expression as type 'long' we need to append 'l' or 'L' character:

1995l or 1995L. That way the expression now belongs to type 'long' and not type 'int' an example and explain the job of defining the type of an integer in this example.

Also, integers that cross the 'int' type limits in the flow of the program are automatically converted to 'long', even if they do not have a trailing 'l' or 'L' suffix.

There is a special case for the 'short' type. When calculating the value of an expression, it is treated like 'int' even though it belongs to type 'short'. In this case, we can say that there is no constant of type 'short'. Because constants within the bounds of 'short' are considered as type 'int' by C++.

There are three types: 'float' (floating decimal), 'double' (double decimal) and 'long double' (long decimal). Let's take the expression 1881.1938 as an example and explain the job of defining the type of an integer in this example.

We know that type 'char' takes a value between -128 and +127 or 0 and +255. Well, since these constants are named 'characters' and have an alphabetic nature, why are we still talking about numerical expressions?

In the following lines, two variables of type char are defined and the constants 103 and 'g' are assigned to these variables, respectively.

'string' (character) literals consist of sequentially ordered strings of character literals. In C++, every expression enclosed in double quotes (") is a constant of type 'string'. Consider the following examples:

As you can see, numeric expressions enclosed in double quotes are now a 'string' constant. We can no longer do numerical operations such as addition and subtraction with them.

Actually there is no type named 'string' in C++. The 'string' type occurs when the compiler treats multiple character constants as a string of characters. Accordingly, the expression "Fatih" would actually work like this:

The compiler treats all these characters as a string and puts them together by adding the '\0' character to the end.

Constants are defined with the word const in the C++ program, and the following definitions are made to declare the data type of the invariant to be used:

Variables or constants in our programs can be of different types. If this is the case, it is important what type of calculation result will be in our mathematical operations. Therefore, type conversion must be done to avoid an error.

In the above application:

In the first operation, we divide the variable named <num> by an integer value; The decimal point is ignored and the result is assigned to variable <a> as an integer.

In the third operation, we first convert the variable named <num>, which is an integer, into a variable of type <float>. Next, we divide the variable that is now <float> by an integer value; the result is assigned as a decimal value to the variable <c>.

If you've come this far, congratulations. You are now familiar with the data types, constants, and variables of the C++ programming language. C++ is a language with so many features to explore. So never forget to learn, wonder and research.

It is a difficult language as well as a fun one. But if you enjoy it, C++ will give you more.

How do I create a Player for a Podcast using RSS Feed?

What is Java and its Brief History