coming to you with another update on my journey to becoming a frontend web developer. as i type this, i'm about halfway through my course on React. so i've been learning JSX, how to write functional vs stateful components, how to change state with user input, and in general more practice writing ES6 code.

it's going pretty well so far, but i'm also often confused! as one of my instructors put it this morning during our check-in meeting, it's a paradigm shift from writing vanilla JS to using React. the hardest part so far is understanding the flow of data and functions through the various components in the code that i write. so far handling state mostly makes sense, but for some reason i find props really confusing. if anyone has any recommendations for learning resources for React (preferably free!), lmk.

my instructor also nudged me to start networking a little bit. i'll be completing my coursework soon and moving on to the stage of active job-hunting. she reminded me that connections take time to build, so you want to start as early as possible. and she's absolutely right! so i'm going to be pushing myself in that direction over the next month.

on that note, if anyone knows of tech/frontend dev networking or community-building opportunities coming up in the new york city area, let me know! i'd love to go to something irl.

another thing my instructor and i discussed this morning was the idea of maintaining your focus. there is just so much out there to learn that it can be easy to splinter your attention, taking a bite out of everything you can. and as a newbie who wants to break into the industry, it can be tempting to try to learn as much as possible in order to make myself seem more qualified or passionate. i have noticed myself doing this a couple of times so far. but this can backfire, limiting one's ability to learn anything really well and get quite good at it. it's fun to learn a bunch of new stuff but eventually you gotta pick something and go deep.

i'll leave you with one of my favorite images to return to when i'm feeling down about my progress. it's even pinned on my notion. 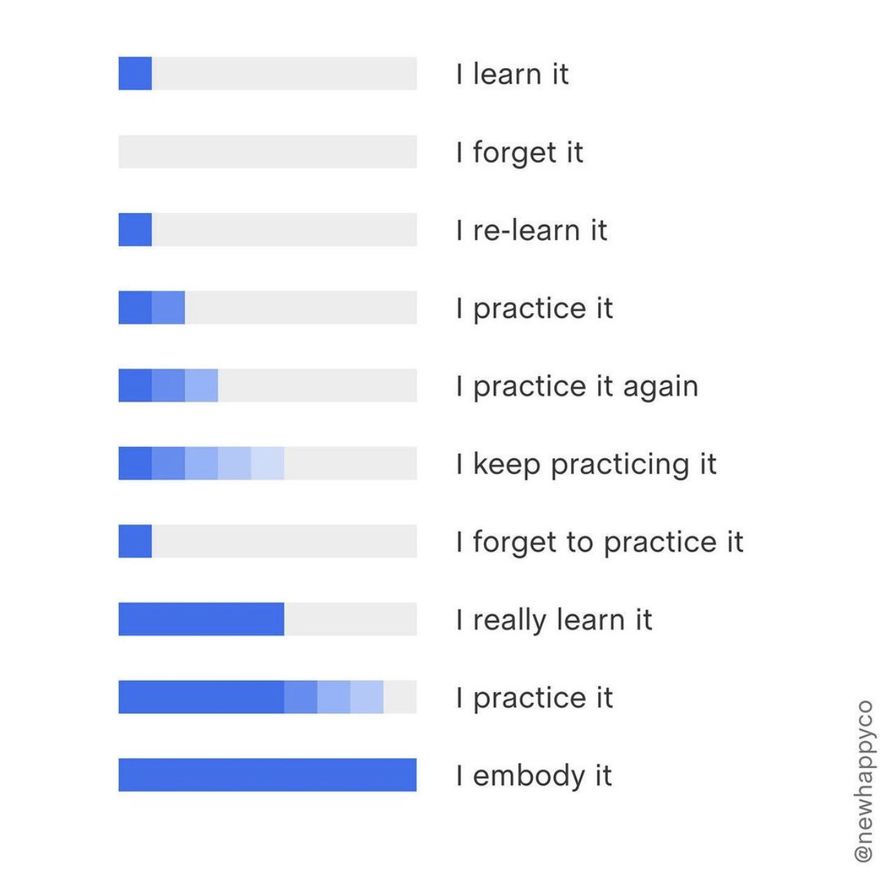 hope you're all feeling well and supported on your own journeys ❤️‍🔥 as always, drop a comment - let me know how you're doing!

Once suspended, sheblair will not be able to comment or publish posts until their suspension is removed.

Once unsuspended, sheblair will be able to comment and publish posts again.

Once unpublished, all posts by sheblair will become hidden and only accessible to themselves.

If sheblair is not suspended, they can still re-publish their posts from their dashboard.

Once unpublished, this post will become invisible to the public and only accessible to sheila.

Thanks for keeping CodeNewbie Community 🌱 safe. Here is what you can do to flag sheblair:

Unflagging sheblair will restore default visibility to their posts.