CodeNewbie Community is a community of 10,727 amazing newbies

If you are a newbie like me, I have two questions for you:

When you first learnt HTML, CSS and JavaScript:

I was taught to do things as I described above. When I "level up" to React, I kept doing the same thing. Turn out these "classic" ways of loading web fonts and importing SCSS stylesheet are NOT the best practice with React.

How to add SCSS stylesheet in create-react-app project?

According to the create-react-app documentation:

So that means, unlike the "classic" approach (as mentioned at the beginning), a compiler like Live Sass Compiler is no longer necessary.

To quote from create-react-app guide on "adding a style sheet":

This project setup uses Webpack for handling all assets.

This means Webpack handles the compilation, we don't have to do it ourselves with a compiler.

How to load web fonts in create-react-app project?

We will use Google Fonts Roboto in the following example.

You are probably familiar with the two choices from Google Font, 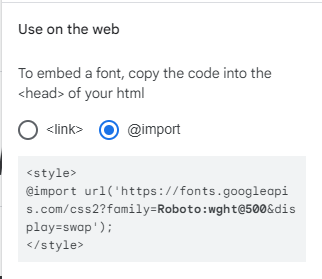 So which one should you choose, and which one is a better way? Let's discuss one by one:

If you use an @import statement in SCSS/ CSS file, you have to import that SCSS/ CSS file into your JavaScript file (don't forget to install node-sass first for SCSS), like so:

According to this StackOverflow answer, importing web font via @import statement to an SCSS/CSS file "ensures your fonts go through the build pipeline", which means to say Webpack will "verify that the (font) file actually exists" when compiling, and therefore it is a recommended practice according to this answer.

2. A <link> tag in index.html inside the public folder

According to the same StackOverflow answer above. You can also do it the "classic" way BUT it is not recommended since the font loaded this way "does not go through the build pipeline".

So it should be clear now. Always use @import, right? Not so quick to jump to the conclusion yet. Turn out there's a speed advantage of using a <link> tag:

According to this article from Google Developers:

My conclusion for now

I am not yet "level up" enough to think about optimization at this point. So I am taking the advice from both links and use @import in my SCSS for now.

Other ways to load web fonts

The two methods described above are by no means exhaustive. There are other ways to load web fonts that I did not include, such as:

I am sure there are other (better) ways of doing things that I am unaware of. If you do know better, kindly leave a suggestion below.

Fonts is a BROAD topic

When I research for this article I found that fonts is a broad topic. Sometimes the answers/ articles conflict with one another so I can't be 100% sure of what I wrote is correct. So if you find anything inaccurate please feel free to point it out.

How to stop react from sending some data back to server.

Happy Pride Month! Here's How We're Celebrating as a Community 🌈

Conquer Your Fear of Documenting in 9 Simple Steps