I'm a sucker for a good non-fiction read on technology. A few months ago, I saw an instagram post from Danny Thompson about this brand-new book which had just come out called "Androids." Now, I'm a blue-bubbled Apple user myself, however I have used Android in the past and have great respect for what the OS has done for the tech industry and specifically mobile devices. Needless to say, I was very interested in reading it. 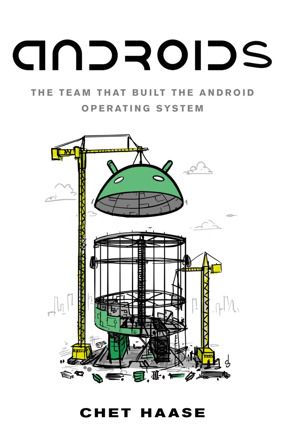 The one hesitancy I had was the level of technical jargon in the book. Is this a book for someone with a CS degree and 5+ years in the field? Or was this a book which anyone could pick up and enjoy? While I have been coding as a hobby for about two years, having a book dive into deep technical language would have been a challenge for me to get through.

I went online to research the book a bit and found some favorable reviews suggesting the book was indeed for anyone to enjoy. Fantastic! I quickly ordered it and waited for it to come in.

Once it arrived, I quickly started reading it. Chet writes about the very beginning of the Android team, their goals and what they were hoping to build (hint: it was NOT a mobile OS), and how each specific part of the OS came together to form an open-source mobile operation system acquired and funded by Google.

The time period of the book mostly takes place over a span of about four years, from 2004 to 2008 when Android launched. The book is split into different parts which explain the early history, the team and everyone's roles, the launch, and how Android became a success.

Most of the chapters are divided into the different sections of the Android OS and focuses on the people of that specific team. There were places in the book which I'll admit I didn't quite understand (the specific process someone used to accomplish a task), however I still was able to grasp that things were happening and was able to keep up with the story. Chet does a good job keeping the shop-talk to a minimum but does include some advanced things which experienced programmers will pick up on. I would compare it to the Marvel movies being made. Everyone enjoys the stories and action, however there are specific Easter eggs and background things which comic-book pros will be able to notice.

My favorite parts were near the end when he writes about why Android was so successful and the launch day. A lot of hours and work went into making Android a success, and the launch day was a culmination of all that work. There is also a section in the book about Apple and what their thoughts were about Android, which I also found interesting.

I'm being fairly broad and not giving away too much, as you should definitely grab your own copy on your preferred e-reader or as a hard copy. I went the black/white hard copy version, as I didn't care that much for colored photos and I saved a few bucks.

Overall the book is a fun read, and I found myself putting 2-3 solid hours into the book each time I opened it up. If you are someone who likes reading about the programmers before you, or you enjoy a nice history non-fiction book, this is a great option. I was reminded about what the early smart-phone era was like with mentions of the Droid phone (it even has it's own chapter), the G1, and the Nexus. And this book serves as a good reminder on how forward-thinking Android was and how they have had a profound impact on mobile devices. Some of the features the early Android team added were later copied by Apple like over-the-air downloads and push notifications!

Have you read this book yet? If so, comment below with your own thoughts. We can start a discussion!

Also, if you know of other books like it that are great reads about programming and the history of it, please share below as well as I'm always on the hunt for more

Aaron McCollum
Experienced sales and customer success strategist by day, software programmer by night. I'm from the US originally and currently living in Japan.

Thanks for keeping CodeNewbie Community 🌱 safe. Here is what you can do to flag aaron: