Machine Learning is the technology which is growing at a very fast pace in today's world. It is a subset of Artificial Intelligence. Some of the uses of machine learning in our daily life are Face recognition which we use to unlock our smartphones, Home assistants like Google Home, Amazon Alexa and Self-driving cars.

Machine Learning is teaching the computer to perform certain tasks without without being explicitly coded. It means that the system gets a certain degree of decision making capability. Machine Learning can be divided into three major categories:- 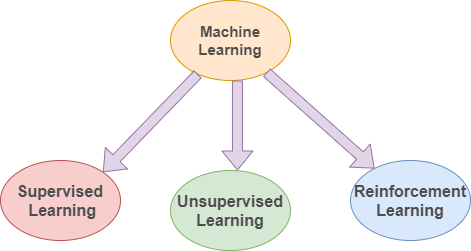 Supervised Learning is known as supervised because in this method the model learns under the supervision of a teacher. The model has both input and output used for training. It means that the learner knows the output during the training process and trains the model to reduce the error in predict. The two major types of supervised learning methods are - Classification and Regression.

Unsupervised Learning means that there is no supervisor for the process of learning. The model uses just input for training. The output is learned from the inputs only. The major types of unsupervised learning are Clustering in which we cluster similar types of things together and finding patterns in unlabelled datasets.

In this post I am going to explain the two major methods of Supervised Learning :-

Python provides a lot of tools for performing Classification and Regression. One of the most used library is scikit-learn. It provides many models for Machine Learning.

The basic steps of supervised machine learning are-

I hope it was helpful for the Machine Learning newbies and budding Data scientists. Please, upvote and share among your friends if you liked the post.

PHP vs Java – The Best Choice For Web Development

What to note before or when developing a website.