In the previous part of this tutorial, we learned how Harry and Hermione decided to build a SaaS app to allow people to build their own potions online and share them with the rest of the world. They named it Potionfy.

Hermione created a remote repository, then an issue to address the task of building a landing page, and how Harry worked on that issue locally and created a pull request once he finished working on it.

You can read the first part of the tutorial here: 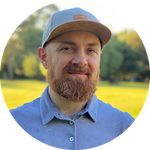 Now, we are going to see:

Hermione has finished with her marketing and promotion tasks, and she now has time to review Harry's code. In order to do so, she opens the GitHub repository and clicks on the Pull requests tab to find Harry's pull request. 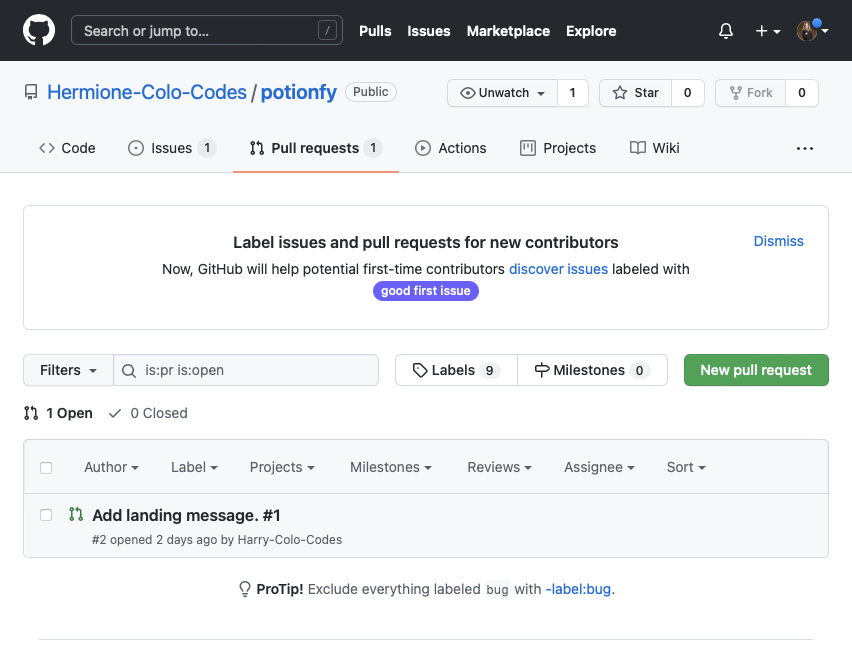 After clicking on it, she then clicks on the Commits tab, and finally in Harry's last commit (this is just one way of accessing the files modified on the pull request). 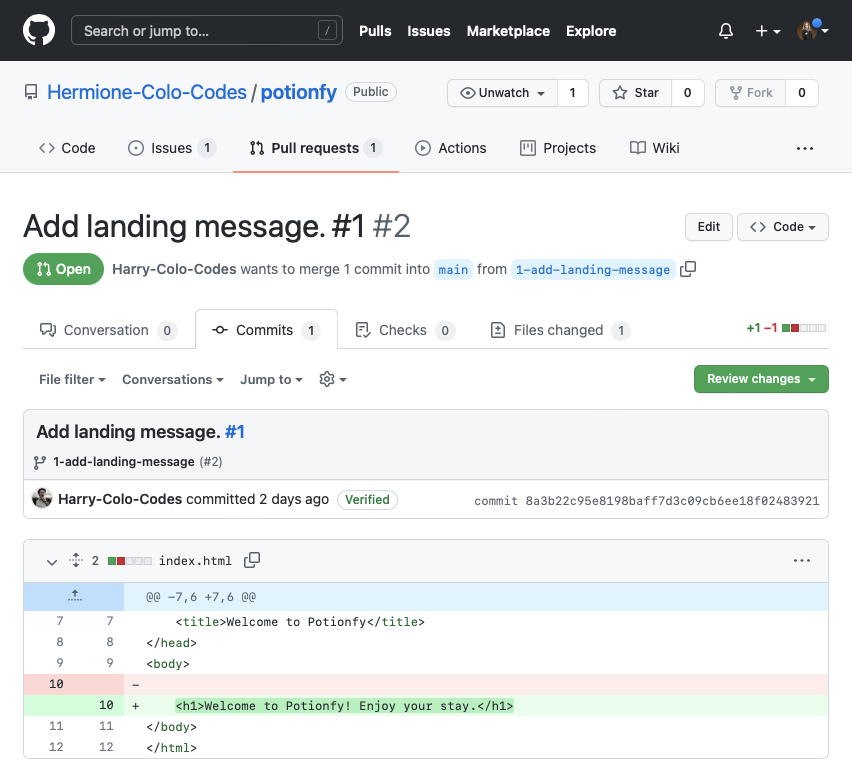 She is not entirely convinced about the <h1> code, so she clicks on the plus icon that appears when she hovers that line of code, and writes a comment to Harry. Finally, she clicks on the Start a review button. 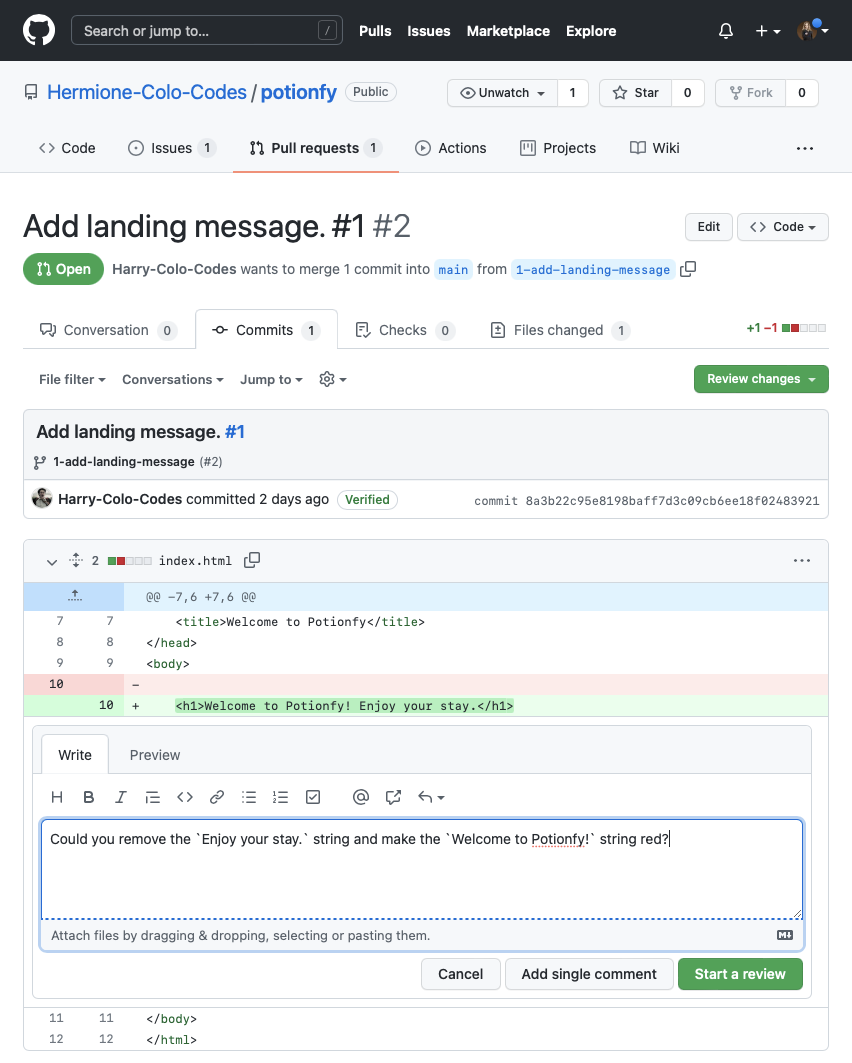 As she has no other comments about the code, she now clicks on the Review changes button to make the review visible to the rest of the team. 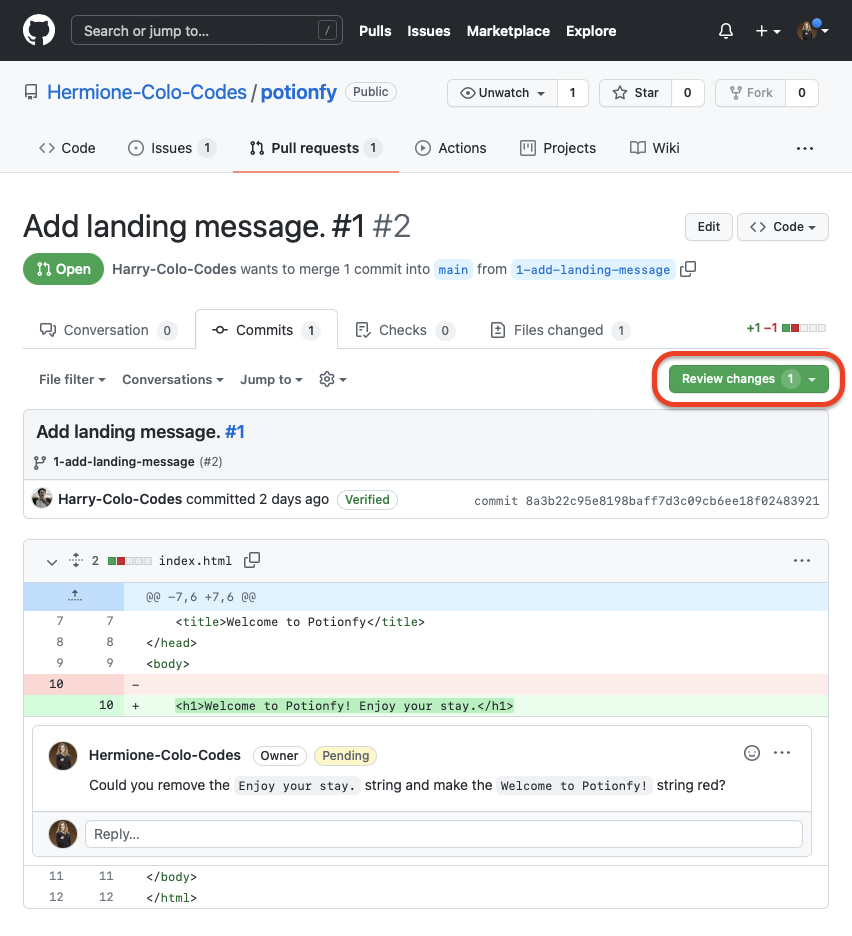 You can find more information about making reviews in this Reviewing proposed changes in a pull request article.

Step 2: addressing the review and creating a code change

Harry checks his pull request and finds a new conversation there: Hermione's review. 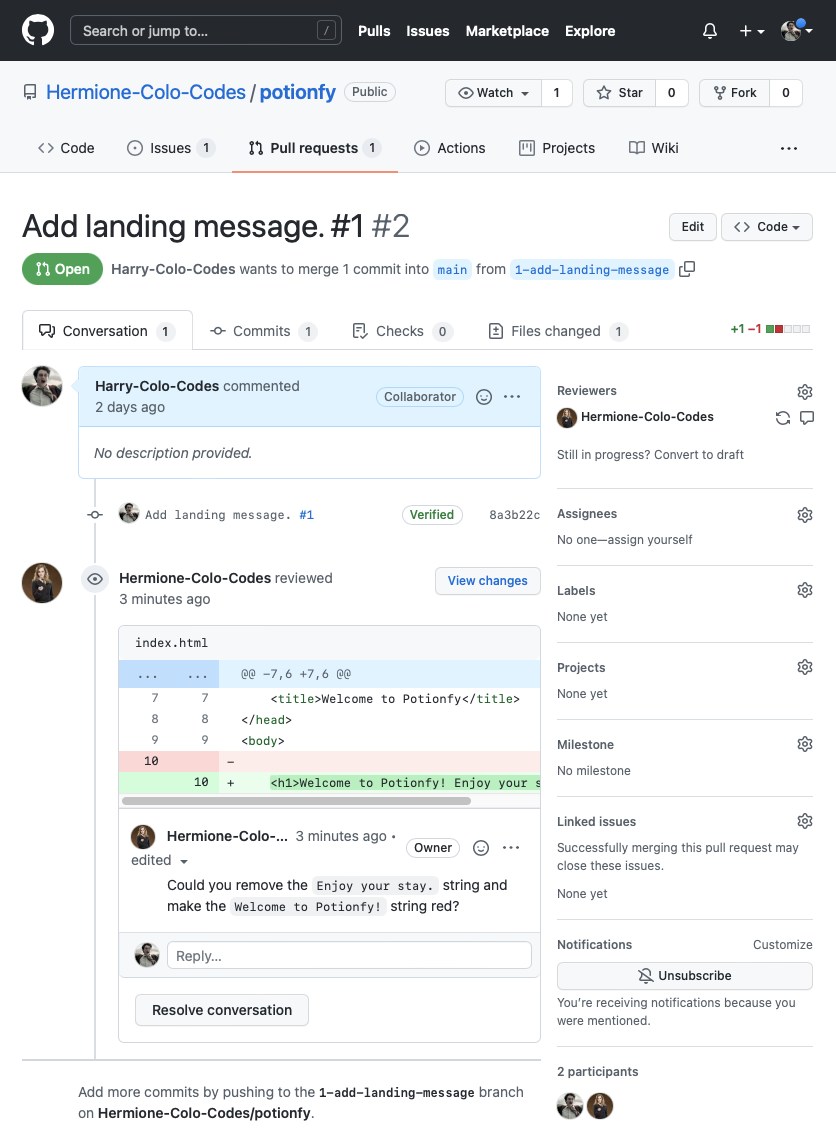 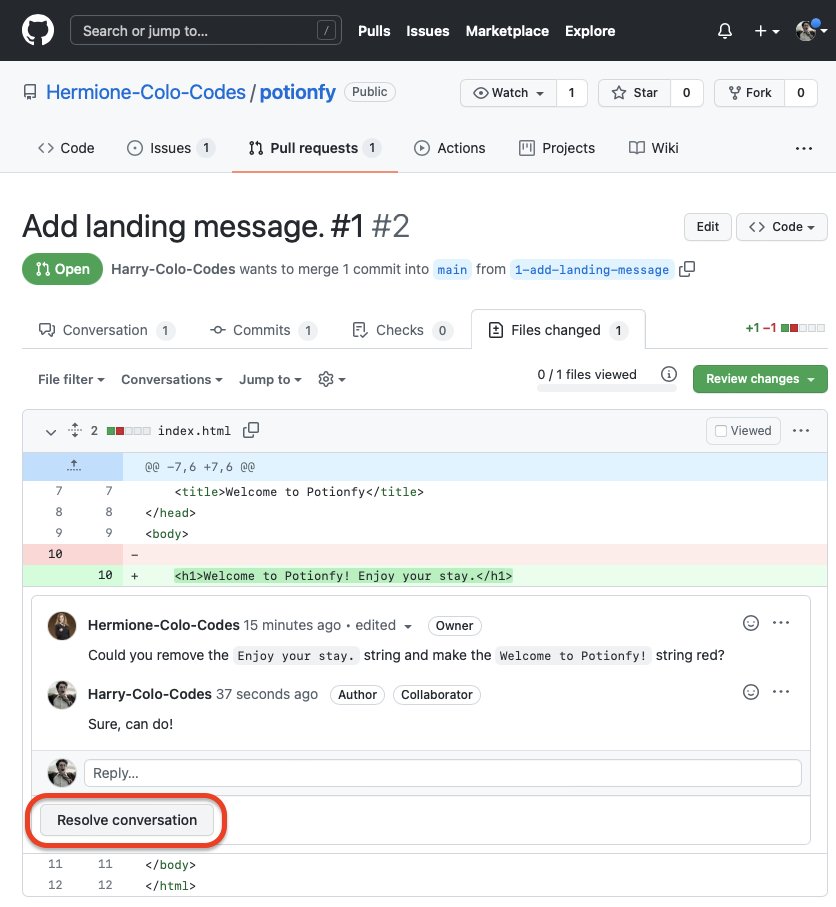 Now that the conversation is resolved, Hermione can submit the review indicating that there are requested changes so Harry can actually work on them. 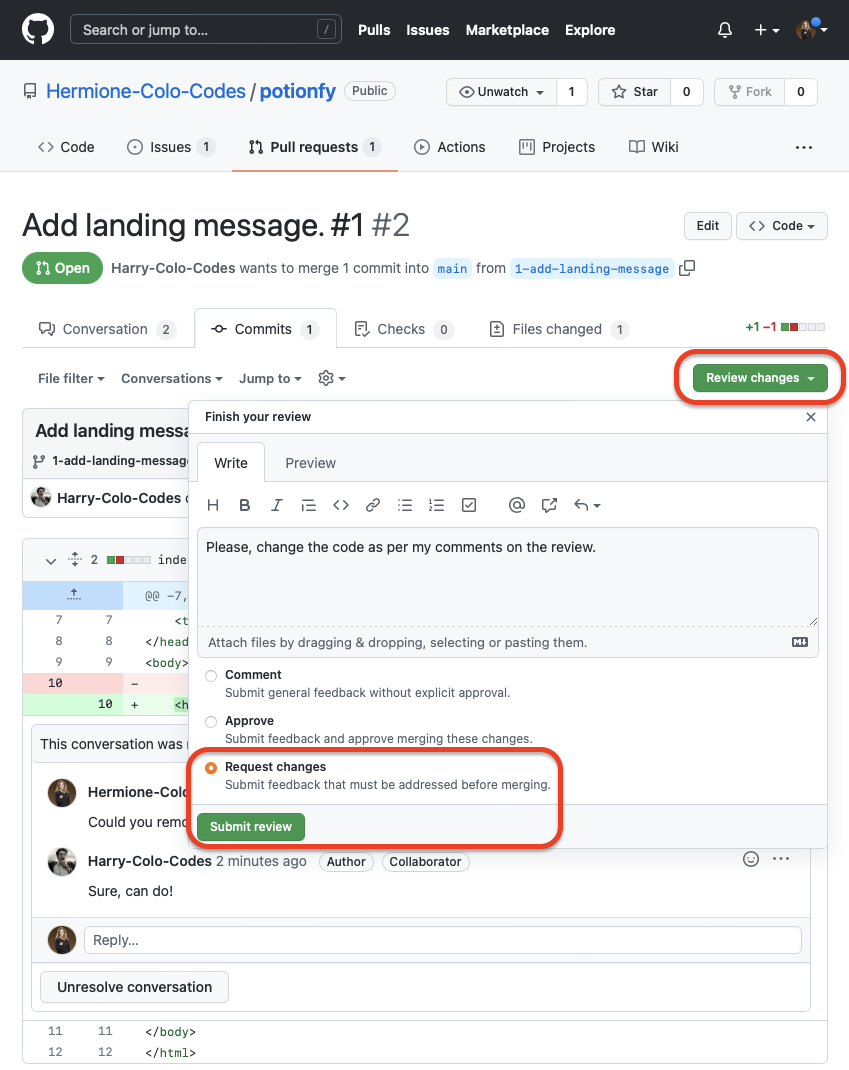 Note: this is just one version of the review process that can be achieved with GitHub and it can differ from the actual way your team chooses to handle them.

Harry checks the pull request again and finds that it has Changes requested. 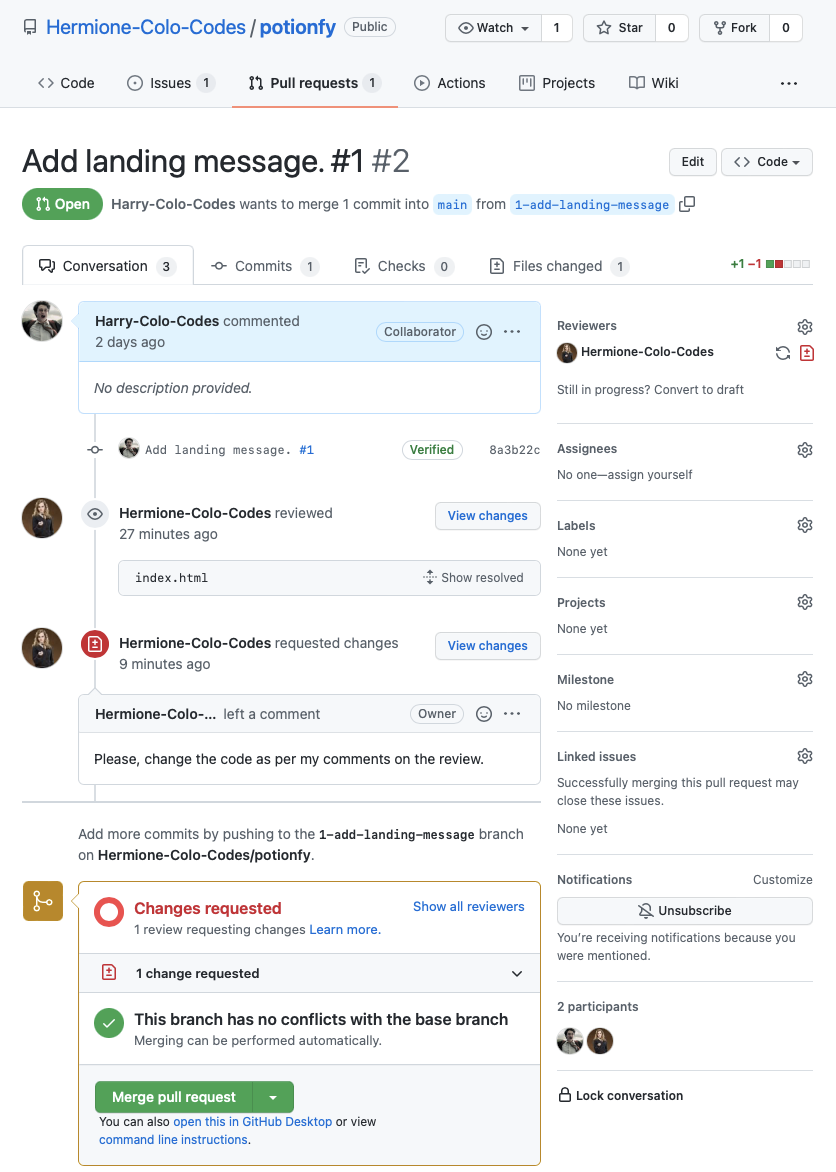 As Harry likes to work locally, he continues working on the branch he had created in order to implement the code changes.

Once he is sure he is working on the correct branch, he makes the changes in the index.html file. 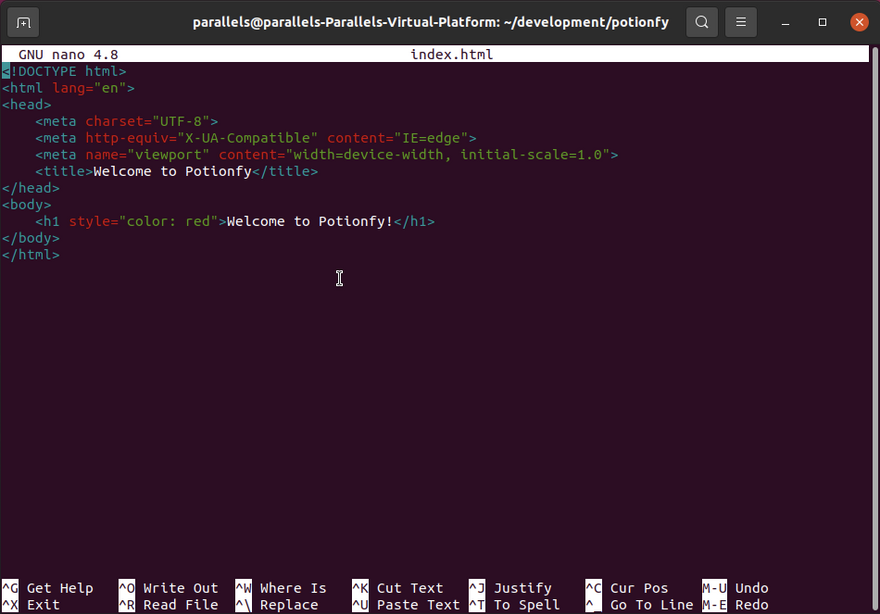 Note: for simplicity sake, we are not creating a separate CSS file here.

Once Harry finishes tweaking the code, he stages the changes, commits them (making sure to include the id of the issue because he is still working on it), and pushes them to GitHub.

Now it's Hermione's turn. She goes to the pull request and finds a new commit: the one Harry did and pushed to GitHub. 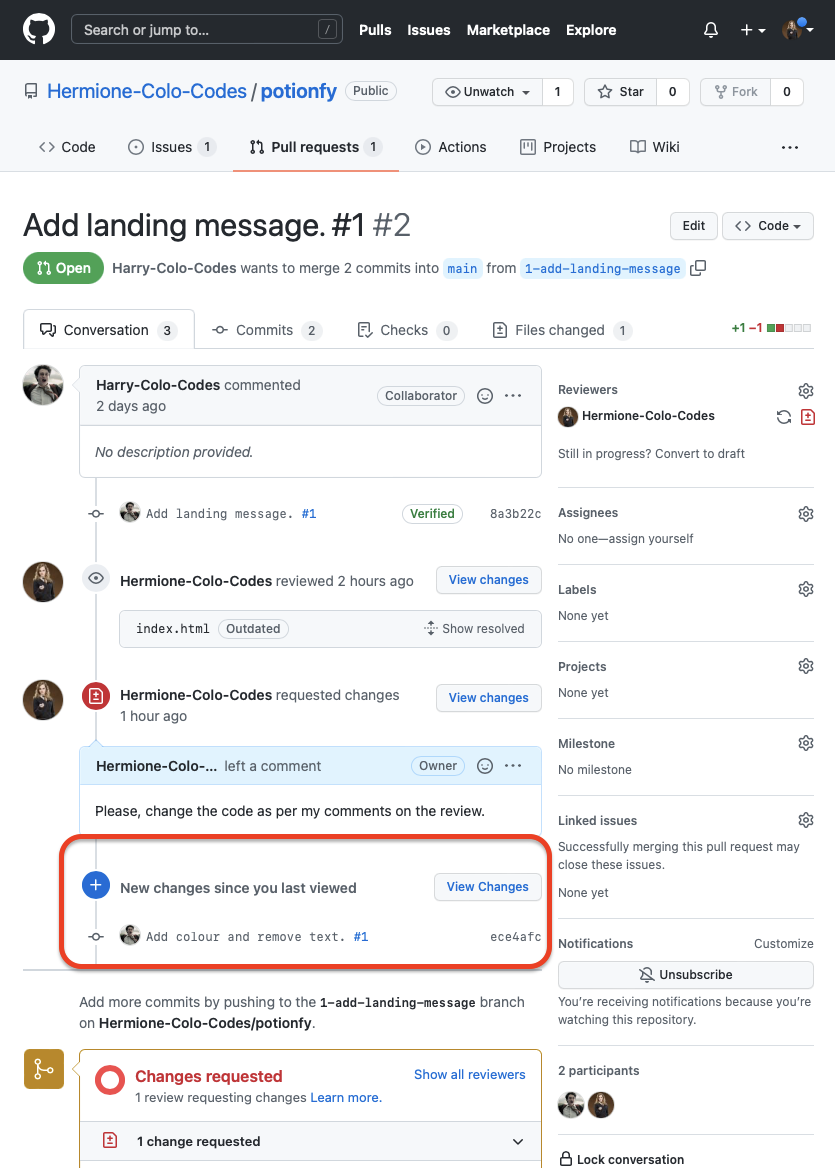 She then clicks on the Files changed tab and finds the ones that she suggested implemented on the index.html file. 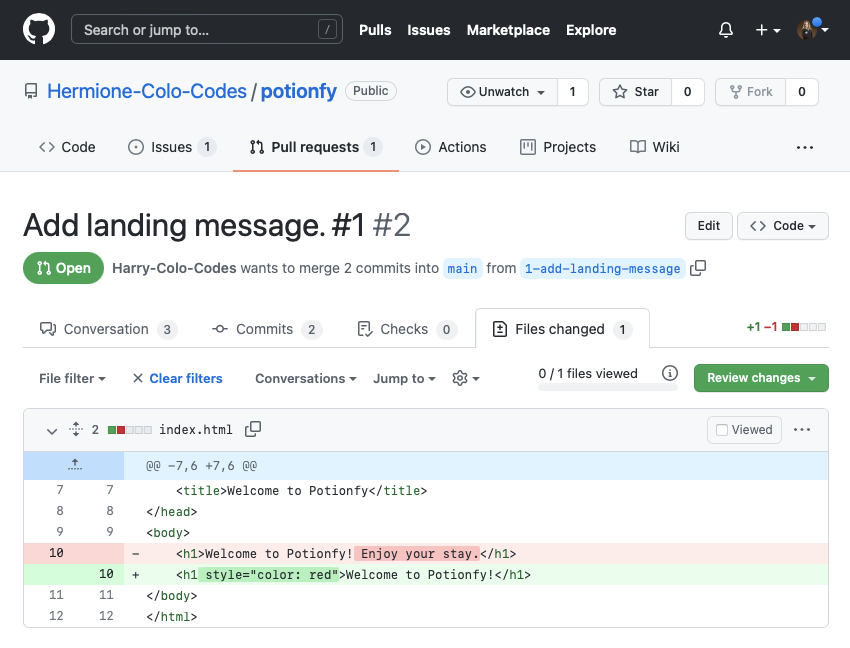 As she is satisfied with the changes, she proceeds to approve them by clicking on the Review changes button and selecting the Approve option. 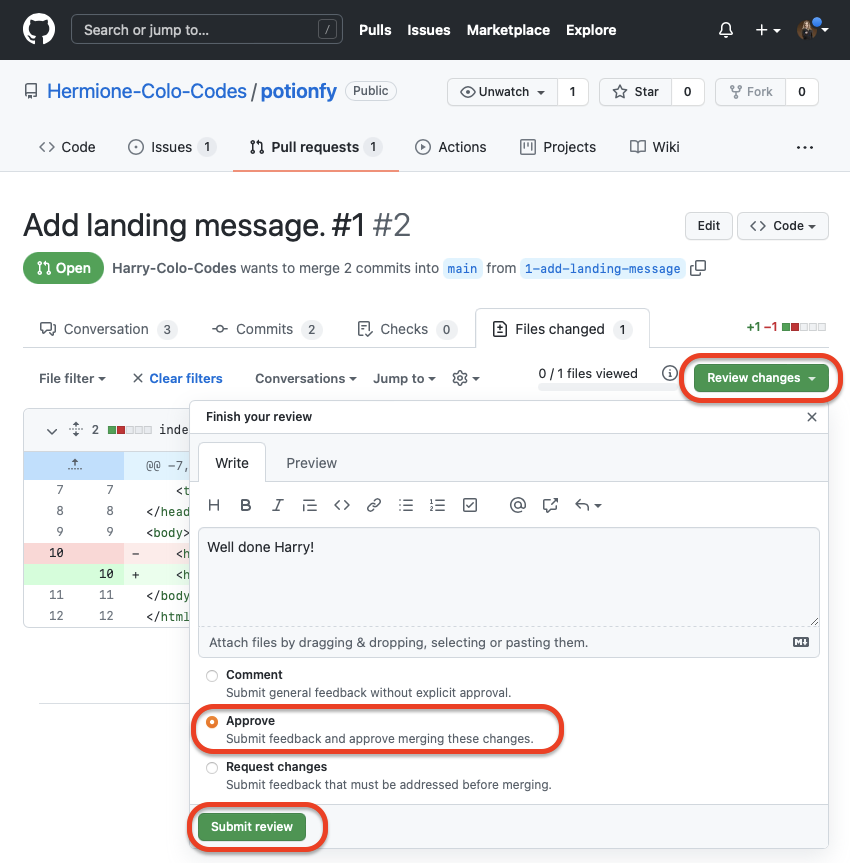 Harry sees that his pull request was approved by Hermione, and he proceeds to merge it into the main branch of the project. 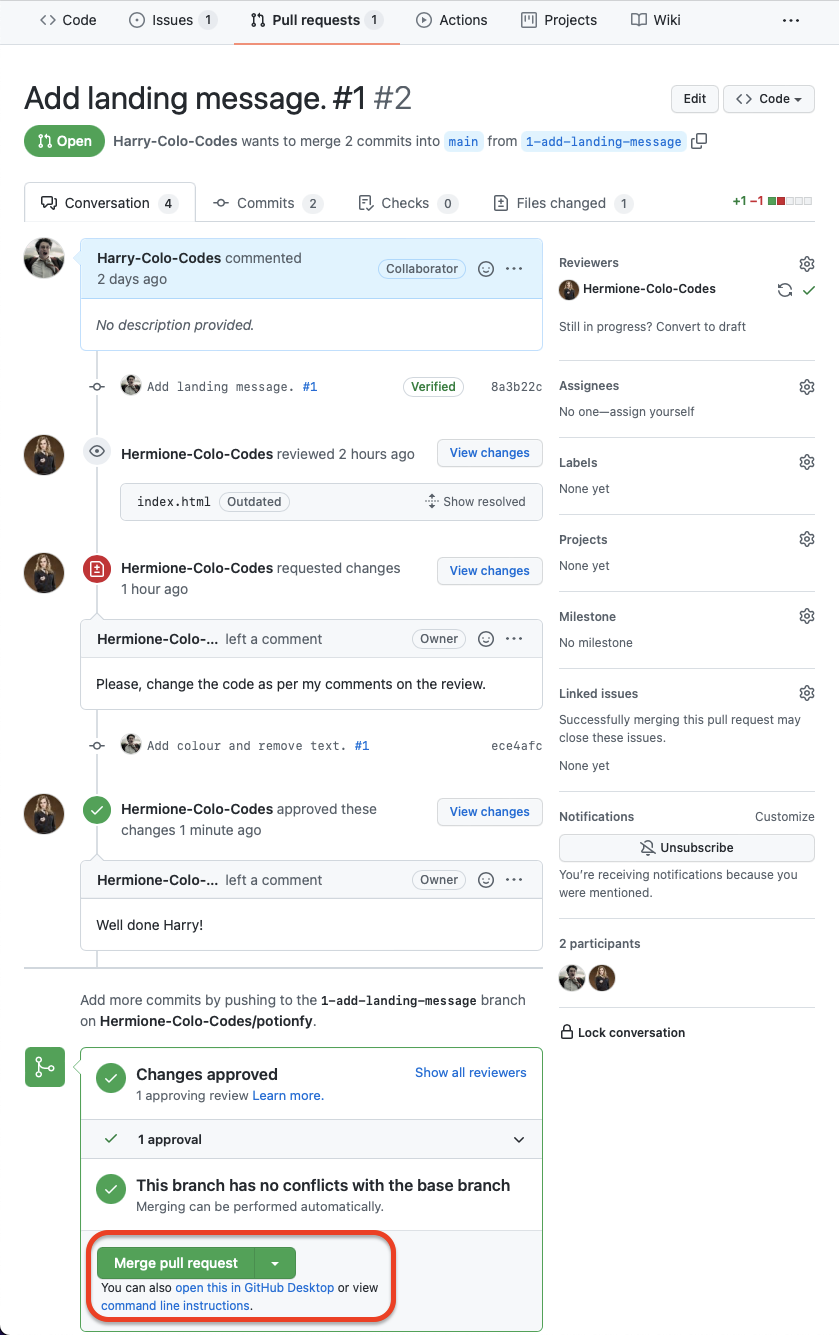 He decided not to delete the branch, as he wants to leave it there for future reference (although it would be a good idea to delete it).

As Hermione is satisfied with how the issue was solved, she proceeds to close it by going to the Issues tab and clicking on the Close issue button. 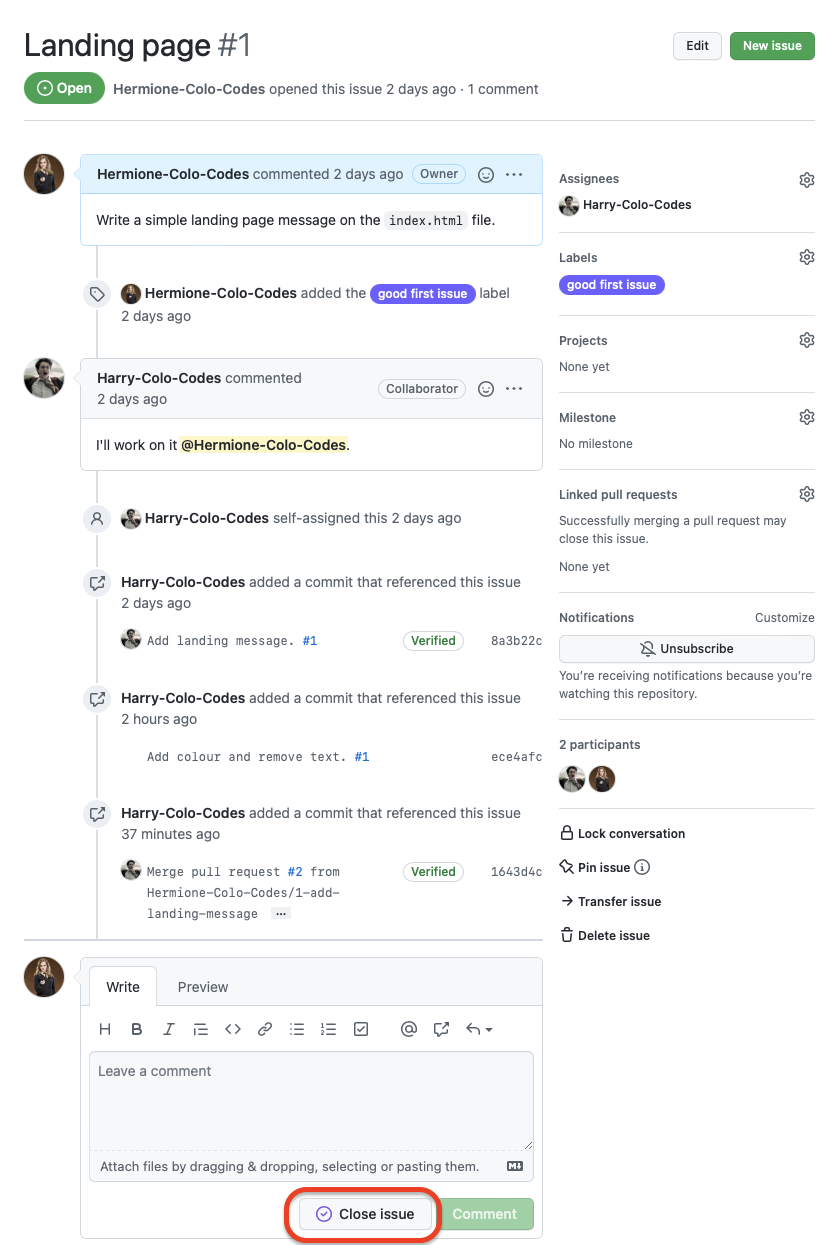 If you want to see a graphical representation of the whole process up to this point, you can click on the Insights tab and then on the Network option. You will be able to actually see how the branching and merging were performed. 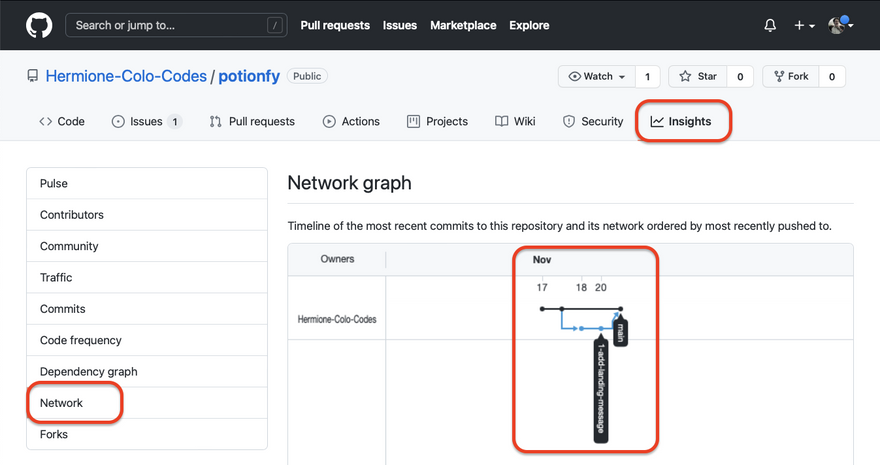 Hermione is aware of this, and now that the landing page is live and accessible to customers, she decided to preserve that production environment and work on a development branch. In order to do so, she creates a develop branch out of the main one, so she and Harry can work on that branch without impacting the production environment. 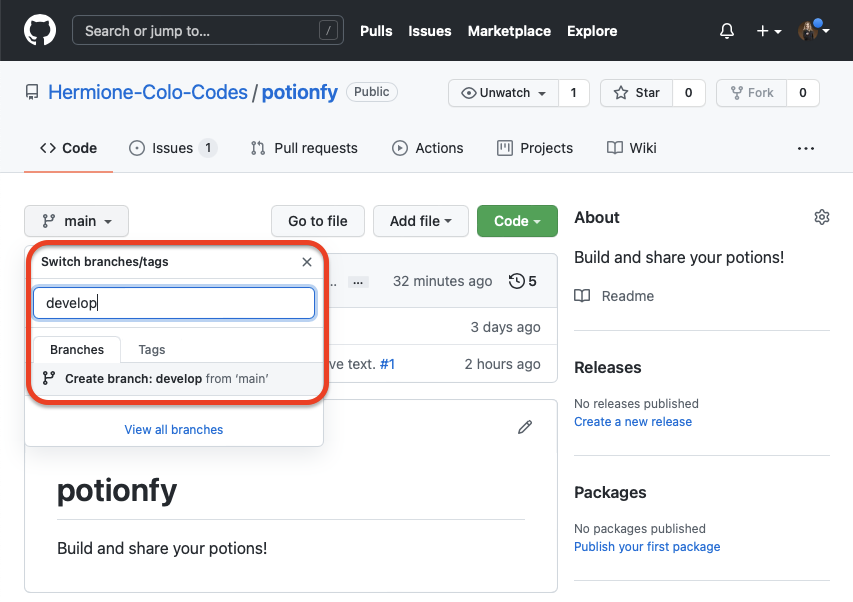 Hermione wants to add a new feature to the landing page: a form to capture clients' emails. In order to do so, she creates a new issue. 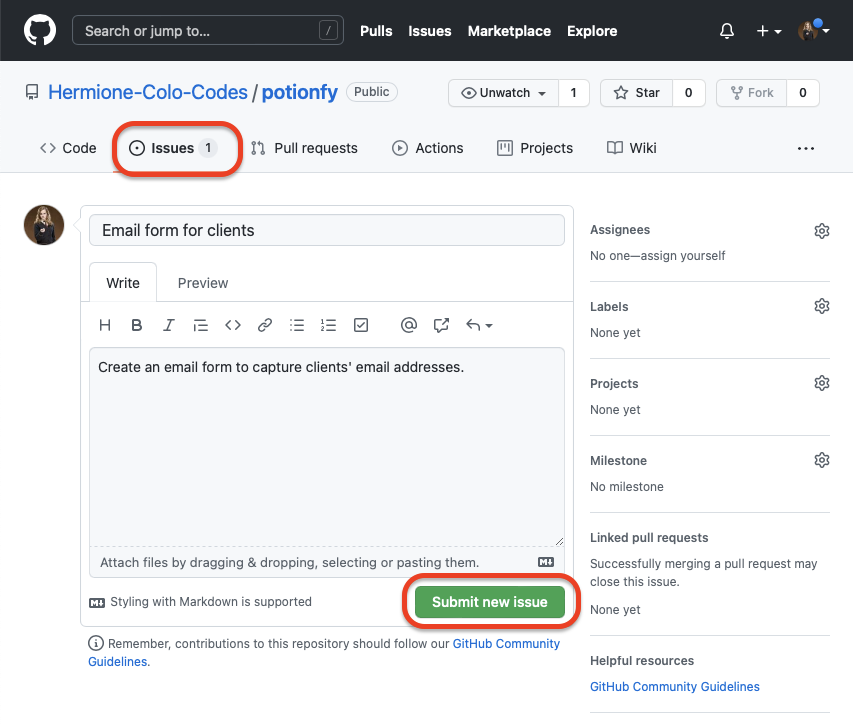 Once the issue is created, Harry decides to start working on it. To do so, he branches out from the develop branch (by selecting that branch on the GitHub interface) a new one called 3-email-form (including the issue number at the front to make it clear how this branch will relate to the issues). 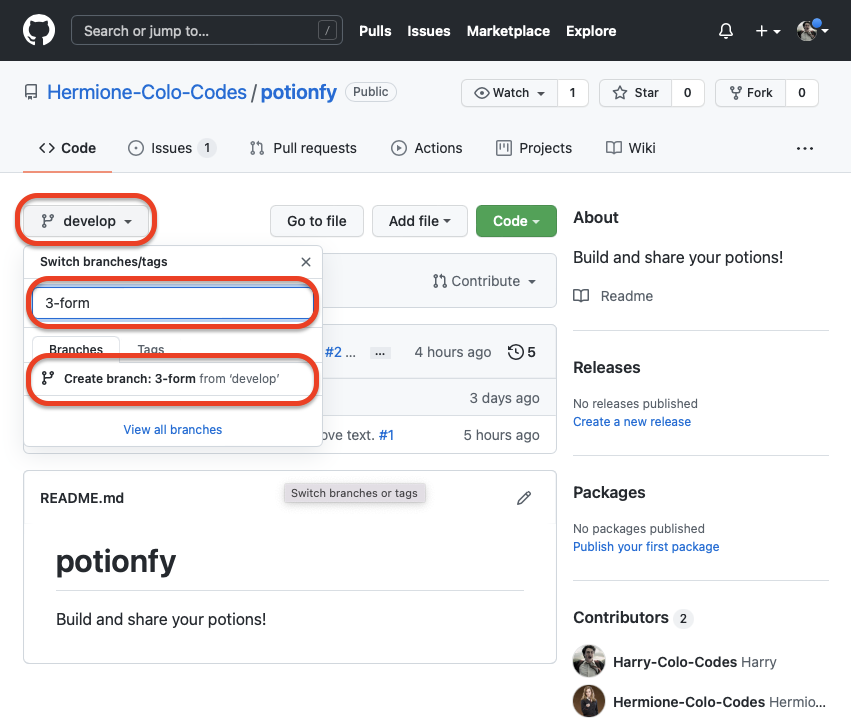 He then pulls that branch locally and starts working on it.

Harry decides to include a simple form into the index.html file:

Note: This code is just to exemplify how Harry is working on a file and it's not how this type of form could actually be built.

Before Harry could create a new pull request, Hermione decides to build a placeholder for the form on the index.html file on her own. In order to do so, she creates a new branch out of develop called 3-email-form-placeholder. 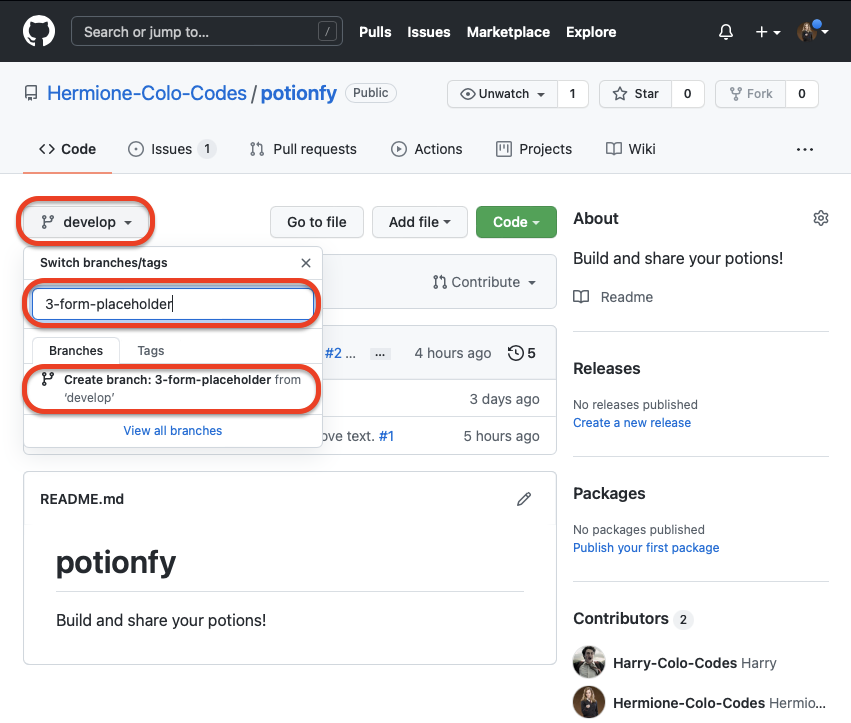 To work on the index.html file, she uses the GitHub online code editor (basically, a VSCode for the web). In order to open it, she just presses the . key on her keyboard and the GitHub page is transformed into a VSCode interface (like magic 😉).

She then proceeds to add the following code to the file:

After saving the file, she commits the changes right there on her browser window by using VSCode graphical interface:

Once the commit is complete, she opens GitHub again and decides to create her own pull request and merge her changes to the develop branch. 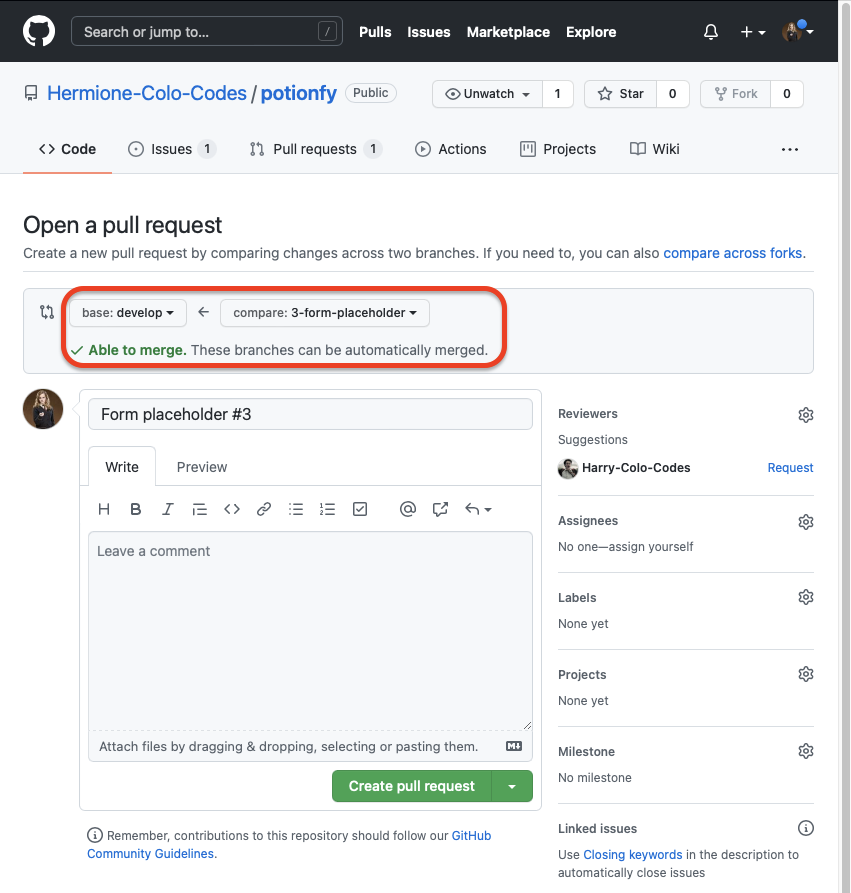 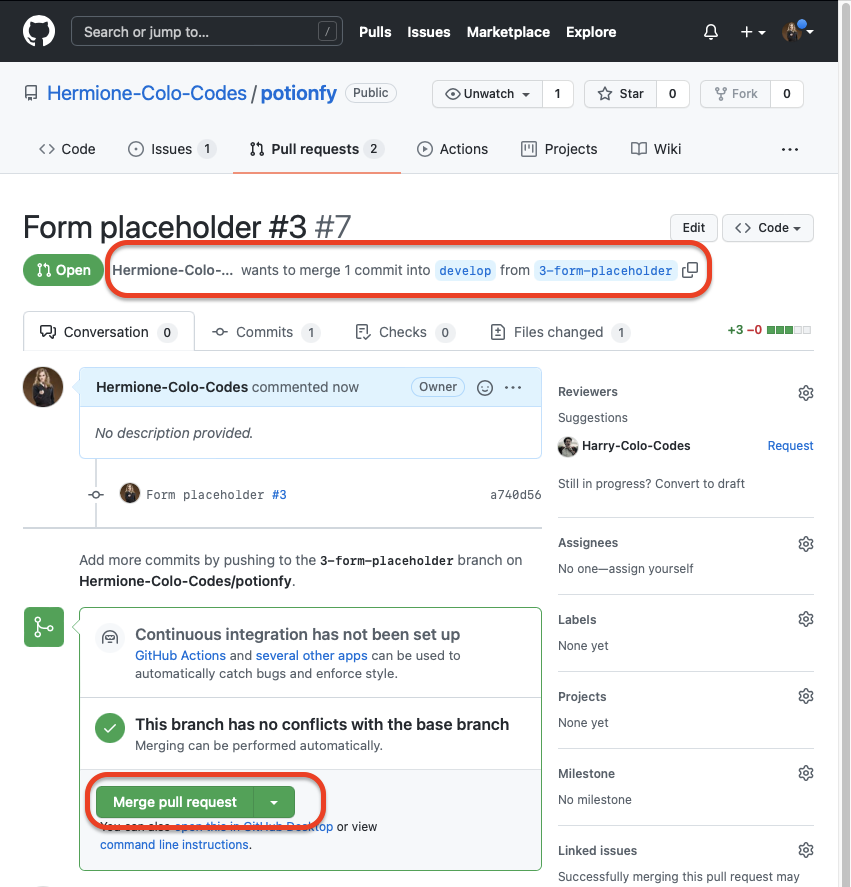 On the other hand, Harry also decides to create a pull request to merge his changes into the develop branch. 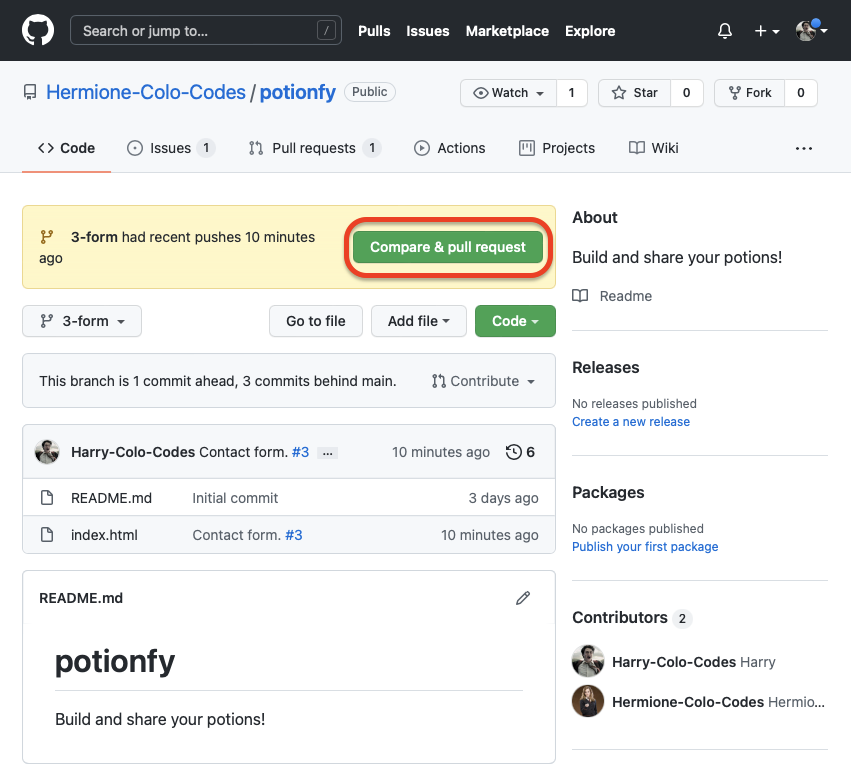 At this point, GitHub lets him know that his pull request won't be able to merge automatically to the develop branch. 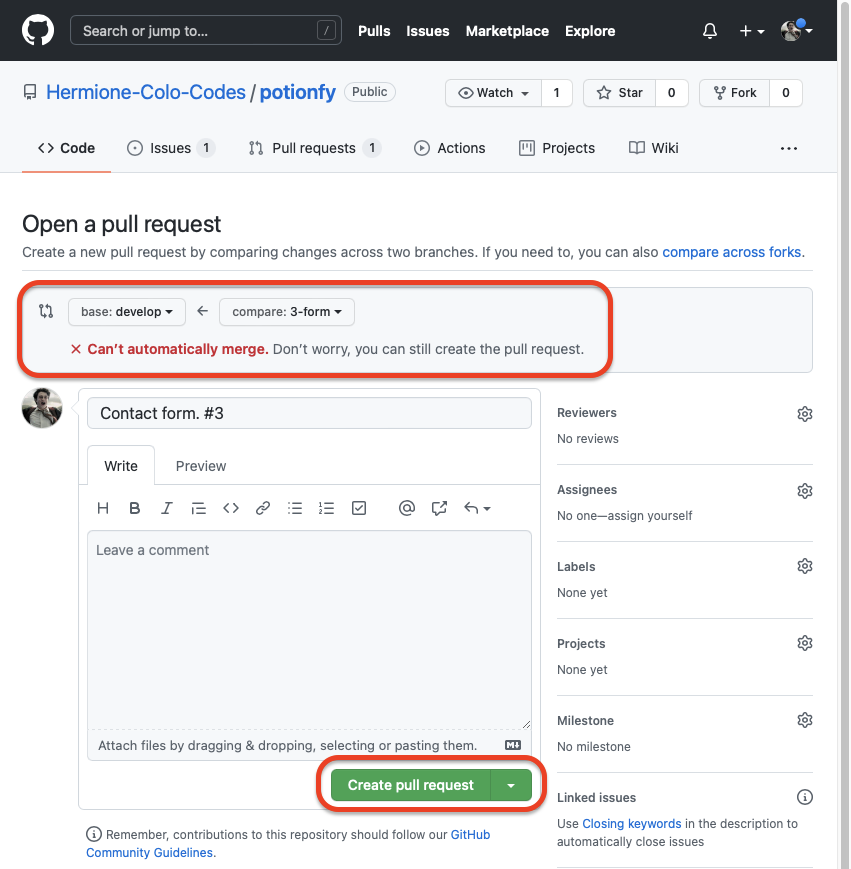 Harry supposes that his branch is no longer reflecting the state of the develop branch and that the develop branch has changed because someone else merged changes affecting the index.html file on which he was working on. Nevertheless, he proceeds to create a pull request.

What he sees next is GitHub's way of letting him know that there is a conflict affecting the file he modified. He proceeds to click on the Resolve conflicts button. 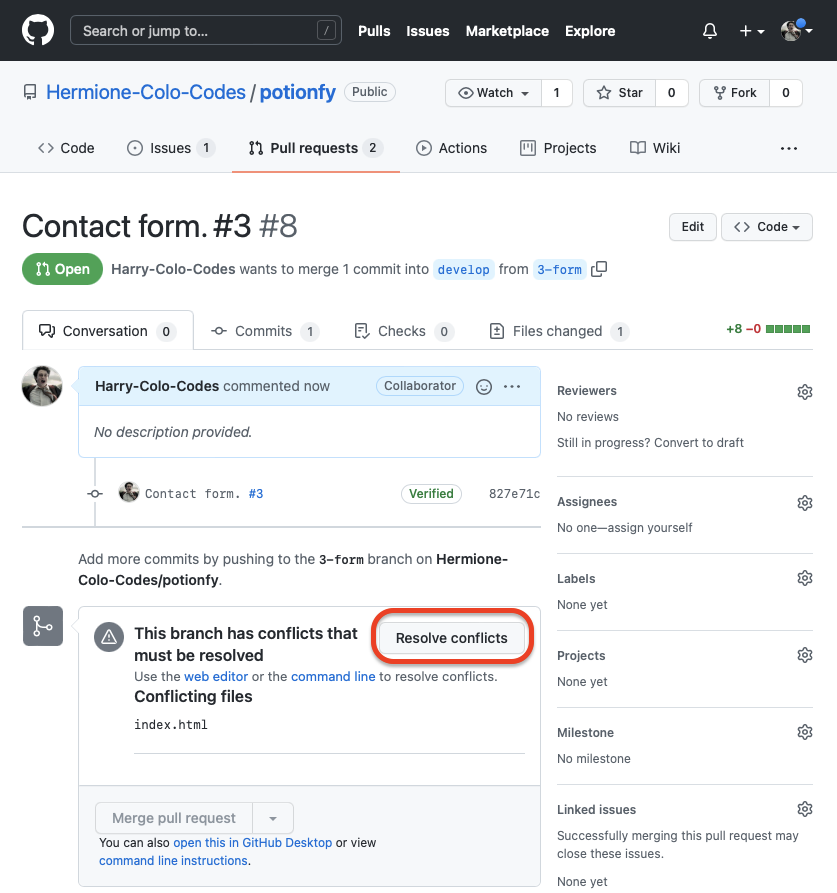 He can now see that the index.html indeed was modified, and the changes made to that file are affecting the lines he himself modified. 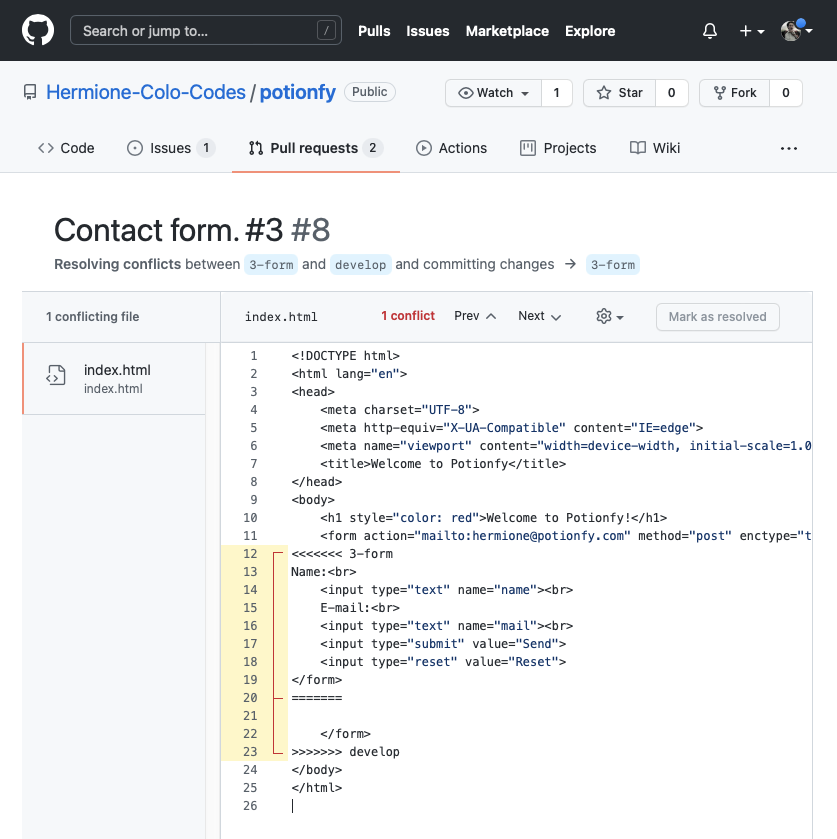 For more information about solving conflicts, you can read the Resolving a merge conflict on GitHub article.

Harry proceeds to modify the file directly on the GitHub site to remove the conflicting changes and then clicks on the Mark as resolved button. 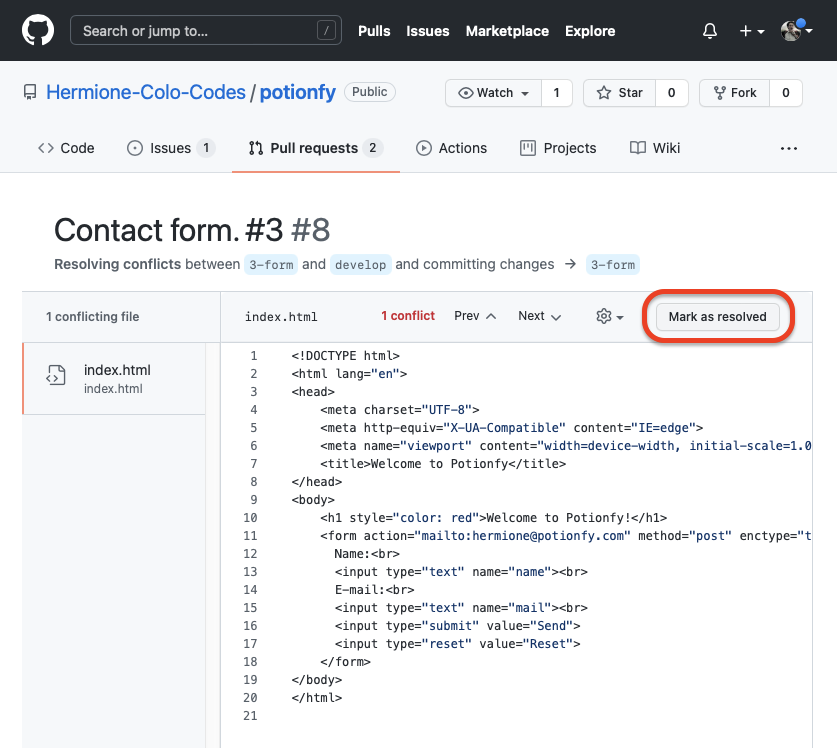 Once the conflict is marked as resolved, he clicks on the Commit merge button. 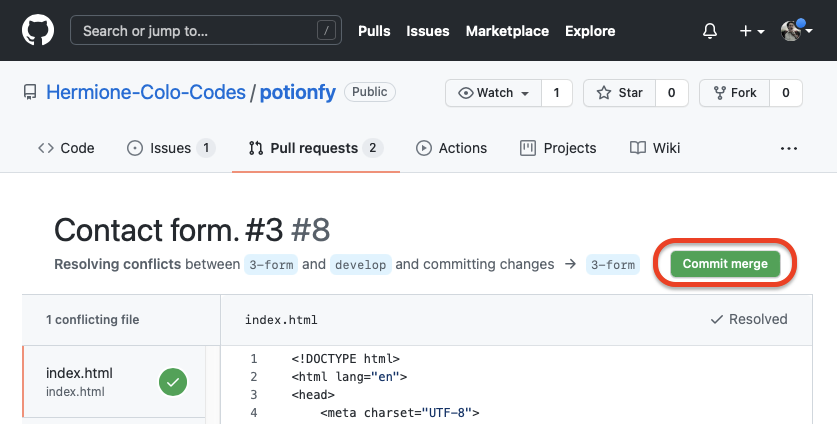 Finally, his branch was conflict-free and he can merge his pull request (assuming Hermione reviewed his code and approved it, just as she did earlier). 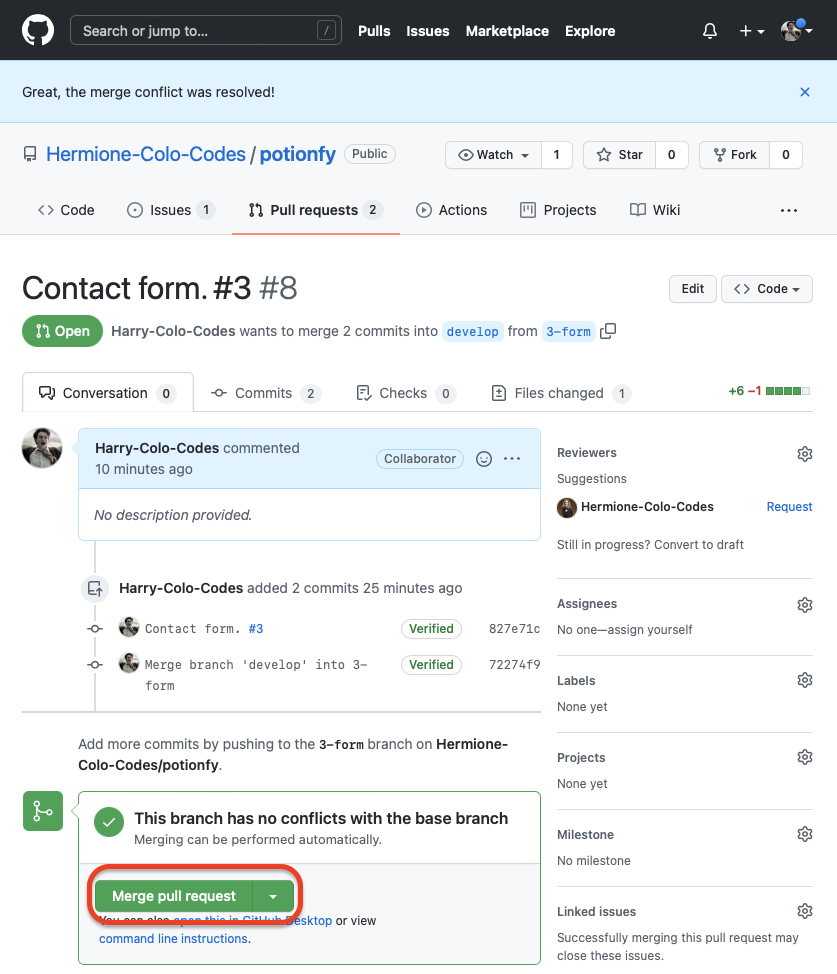 After working on their landing page, Harry and Hermione managed to get lots of email addresses from potential customers and continued developing their MVP. They managed to get funding from a local venture capital firm, and they are now in the process of hiring other developers to launch Potionfy to the public. I'm sure they would love to take a look at your resume to consider you for a position in their company, so good luck!

Once suspended, colocodes will not be able to comment or publish posts until their suspension is removed.

Once unsuspended, colocodes will be able to comment and publish posts again.

Once unpublished, all posts by colocodes will become hidden and only accessible to themselves.

If colocodes is not suspended, they can still re-publish their posts from their dashboard.

Once unpublished, this post will become invisible to the public and only accessible to Damian Demasi.

Thanks for keeping CodeNewbie Community 🌱 safe. Here is what you can do to flag colocodes:

Unflagging colocodes will restore default visibility to their posts.