CodeNewbie Community is a community of 11,157 amazing newbies

Many of our customers come up to us asking if we could make an MVP for them. Yep. Even big corporate clients want what used to be a startup fad — and what is now an industry standard.

But what is an MVP? The abbreviation, standing for Minimal Viable Product, is used to imply you hit the market before you’re done with all the features. Why is it that popular then? Is it a fancy way of saying “whatever works is fine”, a bargain solution for low-budget projects… or a misused football term after all? 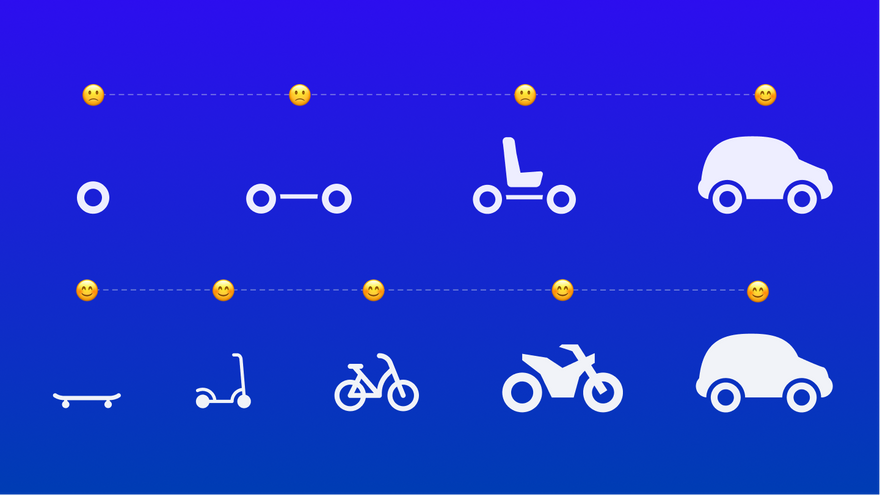 Speaking of minimal viable products, let’s get started with setting on the viability criteria. For a software piece, viability definition may lie within the range of “not crashing on launch” to “being able to compete against the leaders”.

Within the Lean Production Methodology, where the MVP concept originated, V stands for “bringing value to the user”. That’s why they often read MVP as Minimal Valuable Product.

«The MVP is the right-sized product for your company and your customer. It is big enough to cause adoption, satisfaction, and sales, but not so big as to be bloated and risky. Technically, it is the product with maximum ROI divided by risk. The MVP is determined by revenue-weighting major features across your most relevant customers, not aggregating all requests for all features from all customers»

Frank Robinson, the author of the term

So, MVP is basically a killer feature, and the simplest buttons and handles one might need to make use of it. You cut all the bells and whistles off your concept, strip it of all the fancy design extras, and anything that is not crucial – as simple as that.

Why would you go for an MVP?

Here’s an example. Imagine you’re a fan of a particular sport — let’s say, boxing. And you want to become the new Muhammad Ali. So, you start training with all the passion and dedication and whatever else you may find in movies about Rocky Balboa. The question is: when will you take on your first fight?

Option one. You train for ages until you feel like you are two hundred percent fit and ready.

Option two. You get some pretty basic training and jump into the ring as soon the coach is sure you’ll make it to the last round without kicking the bucket. As soon as you are viable for the ring.

However, there is a but. “If things go well” is the critical part in both scenarios. Once you enter the ring, reality comes at you fast. What if you figure out you missed something in your training? What if those in the ring are still trained better? What if the blows you receive hurt too much (shocker!)? Or – why not – what if what you deemed boxing and your passion was actually wrestling, so all your great punching skills are totally inapplicable? You’d better know that in three months than in ten years after you put your gloves on for the first time.

So, MVP is a reality check done the quickest and the cheapest way. It’s not actually cutting functions, but ensuring they are needed before you spend time and money on those.

The MVP-centric approach grows popular as marketing skills become commonplace for entrepreneurs, no matter which is their sphere. TTM is the reason for that. TTM, or Time-to-market, is one of the key metrics for a new product. Time is always money, but when the market launch countdown is ticking, every minute costs you cash in many ways.

And yes, while the scope is small yet, you are safer in your experimenting with monetization models per se. No matter what, your missed revenue numbers will be the least frustrating.

Think of almost every successful software product. Yes, even the hardcore enterprise one would work. They never start as a one-size-fits-all solution, but as a demanded yet simple tool designed to perform a specific task.

OK, are there any real-life MVP cases?

Telegram grew popular before it got the channels, stickers, secure calls, and bots. In the beginning, all it had was a boringly simple messenger with awesome encryption. It could do less than competitors, but it could keep your communication secure. MVP? Betcha.

SAP, the first ERP software coming into one’s mind, started from a pretty simple accounting system, which didn’t sport even 10% of what it has now. The term MVP was not even coined in by that time, but in fact, that was it – a basic solution, offering a new approach on quite a limited scope.

Zappos, the mid-2000 iconic apparel e-store began as a guy buying footwear on your demand from regular stores and sending it by mail. As simple as that.

Moreover, an MVP may prove an idea before you spend zillions on can even become a business even before you expect them to do it!

Dota and Counter-Strike, as lucrative as they are now, began as community mods for popular games (Warcraft III and Half-Life, respectively). No ginormous teams of developers, designers, and community managers, no weekly content updates or events: they offered the very basic setup needed for a new gameplay pattern. A Minimally Playable Product.

HOW TO SCOPE AN MVP?

There is a mnemonic rule designed by Eric Rice, the author of the famous “The Lean Startup”: you take your first idea for an MVP, then cut that in half, and cut it in half again – and there you got what actually is an MVP.

For those hesitant on cutting, here’s another – not that brutal – rule of thumb we nurture here in Fora Soft.
You have to ask yourself three questions.

You may even put your imaginary budget threshold lower than that, until what fits it retains the uniqueness of your product and the very basic usability. Once you understand that you can’t push it down anymore, you got the MVP.

If it is still a complicated task like it may be, as you definitely love your idea, you can start with MVP-izing actual projects. Try to think about what makes Instagram, Google Docs, or your favorite game what they are. Take a shot on imagining they didn’t have all the features they boast now. Where is the border between “I’d go without this feature” and “Oh, it won’t be useless anymore”.

Once you develop a vision of your product’s MVP, you start revving your engine. Time is money, so you want your Minimum Viable Precious right away.

Setting your step towards the MVP on your own is where you might run into a dilemma. On one hand, coding or testing in a rush never results in good code. On the other hand, the MVP stage is somewhat forgiving to the code quality — if it works, it works.

It’s up to you to find the balance between those, but the golden rule is: no matter how much duct tape is there under the hood, the user experience for the killer feature should be streamlined and lovely. Whatever buggy and irrelevant to the key functions should be demolished mercilessly. Whatever is crucial and buggy should be a priority.

AND WHAT IF THEY COPY IT?

Well, everyone remembers the copycat cases – it happened to the MSQRD app, who’d had its minute in the limelight before every competitor got their own masks. Or Snapchat with its fading posts, which turned to be a fading fad (pun intended).

That’s the concern faced by everyone taking (or sugging taking) the MVP path. If there is a killer feature, isn’t delivering a quick-and-basic product the simplest way to unwantedly hand it to bigger competitors, who’d wrap it up in glossy paper and grab your market in no time?

The short answer is yes. It is. If your killer feature is that great, all the big companies gonna copy it. Or release their own renditions already being in development. But the first one to release is the first one to win the audience — and is able either to retain it, entering the top league (like Zoom or Miro, the COVID-era superstars whose leadership is yet to be shattered).

And even if the blue chips roll out their own, more refined solutions… Remember what happened to MSQRD? Facebook bought it. For a much bigger sum than they invested in development.

SO, WHY SHOULD I CUT FEATURES AND LAUNCH MY PRODUCT EARLY?

Can Fora Soft help you with an MVP?

Most certainly! On the MVP stage, it’s not just skill but experience that matters. A developer with a massive background in a certain area (media processing, streaming, and low-latency solutions in our case) is a shortcut to an MVP. Our developers, absolute pros cut the time-to-market, as they already know solutions for typical time-guzzling problems. Please, feel free to contact us via the Contact form, and we will get back to you right away!

What is a DevOps Tools

Retrieving a single value from the Room database

Fora Soft
We develop software for: augmented reality, objects recognition on video, internet TV, telemedicine, video surveillance, e-learning - for companies and startups all over the world.
Why We Have To Know The Number of Active Users In Your App
#analytics #softwaredevelopment
Jesse from Vodeo, ‘Fora Soft is in a perfect spot of good pricing of projects and development.’
#clientreview #softwaredevelopment
Code refactoring in plain words: what is it and when it’s needed
#refactoring #softwaredevelopment

Thanks for keeping CodeNewbie Community safe. Here is what you can do to flag forasoft: