For people new to Git, it can be confusing and intimidating. If that's you, here are six Git commands for your toolbox. With these, you can become productive with Git and lay a solid foundation for your future Git mastery. Code along with these in order and learn them all!

Just a quick side note: this post is intended to be a quick, accessible breakdown of some of the most common Git commands I use every day, which were also the ones I had to look up most often when I was learning Git. Since it’s geared toward people who are just getting into Git, all my examples are trying to help people get practice using Git locally. I’ll save any discussion about remote repositories like GitHub and commands that interact with it for another post.

My hope is that this will reduce the time it takes for someone new to Git to become productive with it.

It will be most useful to you if you already have a basic understanding of what Git is, a concept of how the Git workflow works (branching, merging, etc.), some command line knowledge, and have Git installed and configured on your system.

I use Ruby in all my examples.

git init is how you add Git to your project.

this will create an empty Git repository, a .git directory inside your project directory.

git status lets you see the current state of your files.

git add is how you start tracking individual files. 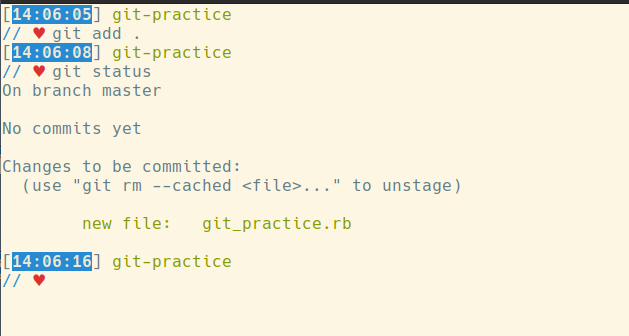 If you run git status now, it'll show you changes ready to be committed, in this case, that we created a new file.

You use git checkout to switch between branches.

Note: For convenience, you can create aliases for any Git command to make it less tedious to type them repeatedly. A common alias I use is git co for git checkout. I'll use this example for the rest of this post, but you can just as easily skip this and stick with git checkout instead. To use git co you need to set that as an alias for checkout in your .gitconfig file. This file is responsible for your global Git configuration, and lives in your system's home directory, not in your project directory. You can easily set an alias using the command line. To set co as an alias for checkout run

This will create a line in your .gitconfig that looks like this:

If you like, you can alias all these other commands too. For example, if you want to set git st as an alias for git status, you would alter the above command with alias.st status where st is your alias, and status is the command you're aliasing. Feel free to play around with it.

Now instead of git checkout you can run git co If you add the -b flag, it will both create a new branch and switch to it at the same time. You can name your branches whatever you like, but descriptive names are best, like so: git co -b add-example-code

You use git merge to integrate your branch with the master branch. I’ll show you how to use it, but keep in mind that in situations where you are dealing with production code that is stored in a remote repository like GitHub, merging should be done by creating a pull request. 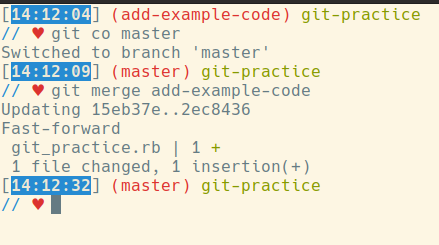 With these commands you will be well on your way to productivity with Git.

We're barely scratching the surface, however. Many good, in-depth resources for learning Git can be found here.

Never underestimate the power of breaks!

The Odin Project – 2 weeks in

Jeremy Schuurmans
Trying to do some good in the world today · Husband, Father, Friend, Latter-day Saint, Software Engineer ·
How To Exit Vim
#beginners #productivity #tutorial
From Cook to Software Engineer: How Apprenticeship Helped Make My Dream a Reality
#beginners #career

Once suspended, jeremy will not be able to comment or publish posts until their suspension is removed.

Once unsuspended, jeremy will be able to comment and publish posts again.

Once unpublished, all posts by jeremy will become hidden and only accessible to themselves.

If jeremy is not suspended, they can still re-publish their posts from their dashboard.

Once unpublished, this post will become invisible to the public and only accessible to Jeremy Schuurmans.

Thanks for keeping CodeNewbie Community 🌱 safe. Here is what you can do to flag jeremy:

Unflagging jeremy will restore default visibility to their posts.