This post is was originally published on dev.to and is co-authored by @juliannatetreault and @ridhwana_k.

In our last post we briefly touched upon a few topics such as: object orientation, dynamic languages and memory management. However, we barely scratched the surface of these concepts, and so in this post, we’d like to dive deeper into object orientation and how it all comes together in Ruby.

As we mentioned in our previous post, Ruby is centered around the concept of “objects”. Everything in Ruby is an object - this includes Booleans, Strings, Integers and more.

Ruby Objects communicate by sending messages to each other. These messages can be thought of as instructions. When we talk about “sending a message from Object A to Object B”, what we actually mean is that we “call or invoke a method on Object B”. These terms can be used interchangeably.

If you take a second to look up from reading this article and glance around your surroundings, you’ll see that there are objects everywhere in the world.

As I look up at this moment, I see - my 😼, a 🪴, a 📘, a 🖨 and a 🛋 are some of the objects that jump out to me. All of these have the potential to be modeled as Objects each with its own data and behavior, and sometimes these objects send messages to each other, like when my cat chews on a leaf from my plant.

Some of the concepts that we’ll need to discuss first before fully understanding Ruby objects are classes, attributes and methods.

What is a Class?

A Class is a blueprint for the construction of similar objects - you can think of it as a template that we use to create objects. The template provides the set of attributes and methods for an object, which will then help each object to define its own set of data and shared behavior.

For example, we may want to represent my cat. In order to do this, we’d first create a blueprint that we could use to represent all cats.

Below we represent the Class-y Cat, haha get it? 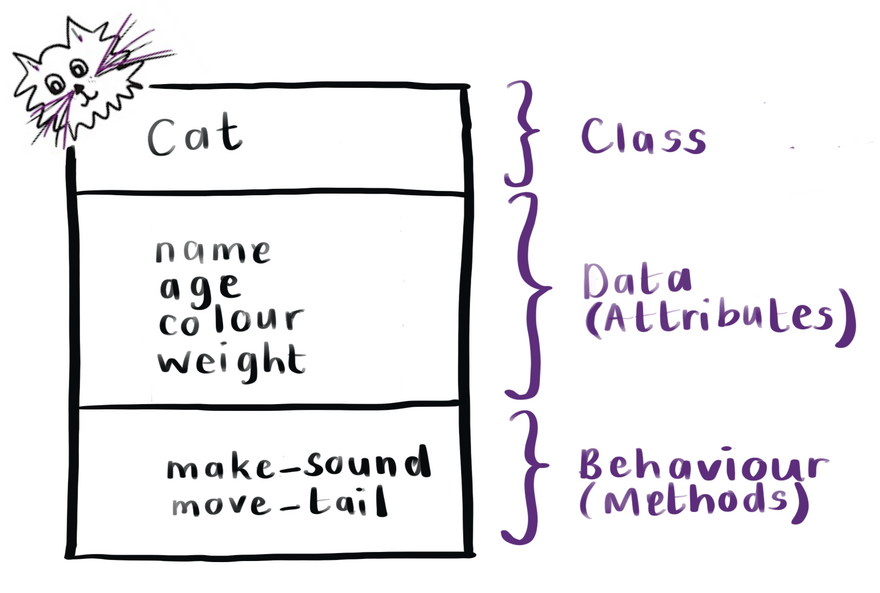 This blueprint will contain the attributes that a cat may have like name, age, color and weight. It will also contain behavior like the sound that a cat will make or how it will move its tail. In the future, we may want our blueprint to be more general, so we may want to make an Animal blueprint and use it to create both a cat and a dog object - but that’s for later.

In reality, the code for the Cat Class may look something like this:

In order to describe my cat, we would use this template to instantiate a new object. In Ruby the new method is used for instantiating an object. This now creates my object as an instance of the Cat Class.

Now this may not make sense to you as yet, but let’s break down the code above by describing the attributes and methods.

name, age, color and weight in the parenthesis are referred to as parameters. They describe the characteristics of the object.

When we instantiate an object, like in the code below, we pass through the values for these parameters in the form of arguments. The arguments are what allow us to provide specific values for that object. 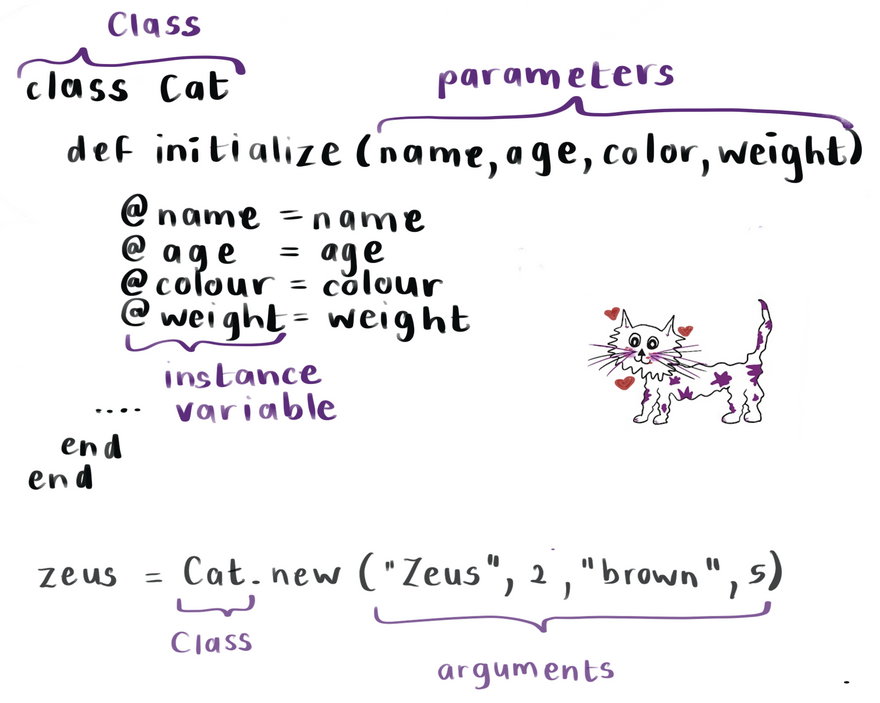 The initialize method as outlined in the image above is then responsible for preparing the instance data for the object. @name, @age, @color and @weight are referred to as instance variables - they can be identified by the @ prefix. Instance variable data is unique to the object.

Instance variables by default cannot be accessed from outside the object:

But what if we really need to print out Zeus’s age from outside?

Well, there are definitely times when we may want to access (read and write) these instance variables from the outside. In these cases we can access the attributes with attribute accessors.

There are three attribute accessors that we will discuss:

In order to be able to read an attribute from the outside without the need to change it then you can use an attribute_reader.

You’ll learn more about methods in the next section.

Likewise, in order to be able to write to an attribute from the outside then you can use an attribute_writer. Just like with attribute_reader Ruby then creates a method on your behalf that looks like the code below, and allows you to write to the attribute.

In order to be able to both read and write to an attribute, we would use attr_accesor. Ruby then creates both methods on your behalf.

Methods allow you to bundle code that can perform tasks and return results in a named, DRY (don’t repeat yourself!) way. Methods can be called from other code, allowing programmers to use the bundled code without having to rewrite it in every place it’s needed.

When it comes to crafting a method, there are a few things you should know about them:

Let’s begin with naming your method. When brainstorming method name ideas, it is important to ensure that the method is aptly named – the method’s name should be explanatory, giving insight into the method’s purpose. If you’re creating a method that will give your Cat Object the ability to meow, then naming the method meow is a good place to start. Now let’s touch upon method capitalization, or the lack thereof. Method names should consist of all lowercase letters. Finally, let’s discuss what to do when your method name is longer than a single word. Multi-word method names in Ruby are written in snake case. For example, if you had a method that both made your Cat Object meow and move its tail, you might write it as meow_and_move_tail, where the underscores between each word represent snake casing.

Finally, the logic within a method is always indented. The rule of thumb when it comes to indentation is four spaces or a tab to the right. While there is an ongoing feud within the programming community about which approach is right (hint: neither are!), it all boils down to preference.

Tabs or spaces - which side are you on?

On the topic of crafting methods, one thing that is important to mention is that methods can accept default arguments and values, which can level up your method and make it more reusable. A default argument allows a method to be called with or without the provided argument, allowing for flexibility. It also gives you the option to reassign the value passed to the default argument, making the method more extensible. To pass a method a default argument with an assigned value, open a set of parentheses after the method name and define the argument and its value like so:

Now you may be wondering what those squiggly brackets and hashtag are doing within the make_sound method–the use of this is called string interpolation, which can briefly be explained as embedding the value within the string that it is a part of. This is something we may touch upon in a later post, so stay tuned, folks!

So, method naming conventions, default arguments, and string interpolation aside, let’s briefly touch upon CRUD actions, or the widely used methods standard to Ruby. CRUD, which stands for create, read, update, and delete, are a set of methods provided in Ruby that perform basic actions such as creating, reading, updating, or deleting an Object. These methods are important to recognize due to their wide use.

Now, with all of this new-found knowledge of methods, you may be wondering how to actually make use of this behavior. If so, then this paragraph is for you! We refer to making use of a method’s behavior as “invoking” or “calling” a method in Ruby. This can be accomplished using dot notation, which when used, invokes a method, passing along a message to an Object, which in our case, is our Cat, Zeus. 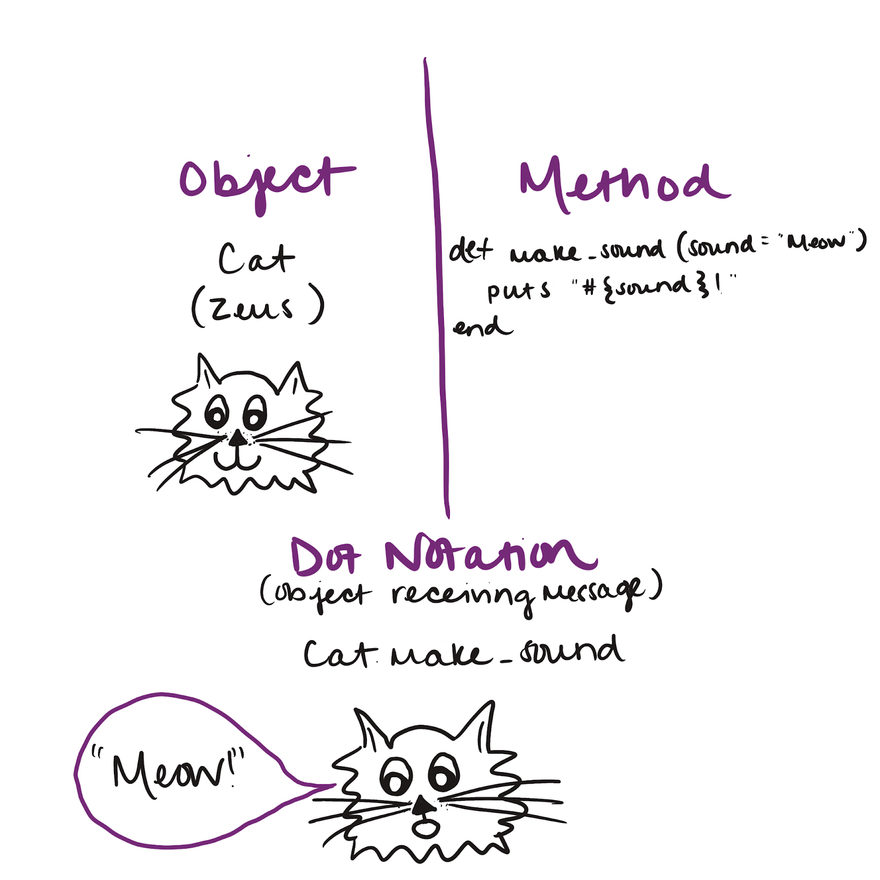 Is that really all there is to methods?! Seems pretty straightforward to me…

The above is just the beginning and while there is so much more to learn about methods, knowing the above should get you to a good baseline understanding of how Objects are given behavior and receive messages through methods. If you’re keen to dive a bit deeper though, we’ll be releasing a brief follow up post that will touch upon some of the topics that didn’t make it into this post.

And that’s it folks… 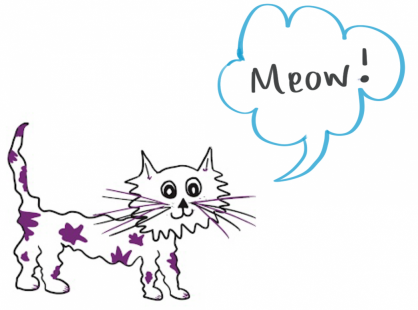 Credits to @ridhwana_k for all of the help with the drawings.

How to Develop a Handyman App: Tips for Startups

The Benefits of Coloring Pages for Kids

I’ve Been Designing Websites All Wrong

Once suspended, juliannatetreault will not be able to comment or publish posts until their suspension is removed.

Once unsuspended, juliannatetreault will be able to comment and publish posts again.

Once unpublished, all posts by juliannatetreault will become hidden and only accessible to themselves.

If juliannatetreault is not suspended, they can still re-publish their posts from their dashboard.

Once unpublished, this post will become invisible to the public and only accessible to Julianna Tetreault.

Thanks for keeping CodeNewbie Community 🌱 safe. Here is what you can do to flag juliannatetreault:

Unflagging juliannatetreault will restore default visibility to their posts.