Let's talk variables, that is of course assuming you already have some knowledge and familiarity with data types and the different ways of specifying data types, if you haven’t, don’t worry, I cover that on "LITERALS".
Back to variables, shall we?, First of all, let’s define variables.

• What are variables?
In Java, variables are identifier types which are associated with a changeable value.
Ex;

The variable above is “$_binaryNumber6”.

Java is generally considered a case sensitive programming language, and as such there are some rules that guide the naming of variables.

Rule 1: The only allowed characters when declaring variables are lowercase and uppercase alphabets (a - z, and A - Z), numbers (0 - 9), the dollar sign ($), and the underscore sign (_).

Rule 2: When declaring a Variable, it is good programming practice to start with a small letter, and in the case of lengthy variable names (i.e., more than one word), you start the next name with a capital letter and they must not contain white spaces.

Rule 3: Variable naming should never start with a digit else you get a compile error.

Rule 4: All predefined Java class names and interface names can be used for naming variables, although it is considered bad programming practice as it can reduce readability and create confusion.

Rule 5: You shouldn’t use reserved words in Java as variable names.

//Assigning and declaring in a single line.

It is generally considered a good programming practice to declare before assigning a variable.

There are two divisions based on type of variables, and they are;
• First Division – Based on the type of value represented by a variable, it is categorized into two types namely;
o Primitive Variables – To represent primitive values.
i.e.,

• Second Division – Based on the position of declaration and behavior, it is categorized into three types namely;
o Instance Variables.
o Static Variables.
o Local variables.
The two divisions are equally important because they work hand in hand, and so that means, a variable can be primitive and instance, or static or local at the same time, and in the same vein, a reference variable can be static, local or instance.

Once again, understanding data types and its uses is very important to fully grasp the concept of variables.

• Static/Class variables
o If the value of a variable is not varied from object to object, then it is not recommended to declare the variable as an instance variable, instead, we will have to declare such types of variable at class level by using a static modifier.
That in essence means, in the case of instance variables, for every object, a separate copy will be created but in the case of static variables, a single copy will be created at class level and shared by every object of the class.

o Static variables should be declared within the class directly, but outside of any method or block or constructor, they can equally be called explicitly.

o Static variables will be stored in the method area.

o We can access Static variables either by object reference or by class name, but it is recommended to use “class name”.
Now within the same class, it is not required or compulsory to use class name, because we can access the variable directly, as shown below;

o We can access static variables directly from both instance and static areas, as shown below;

o For static variables, JVM will provide default values and we are not required to perform initialization explicitly, as shown below; 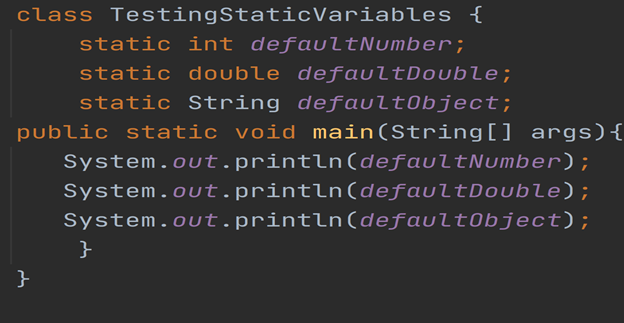 The above might appear a bit more complex to make out, and as such, I will implore you to do a bit more study on “JVM – Java virtual machine”, on your own.

Let’s take a look at another example to further cement our understanding of the processes.
Observe;

Finally, the elementary way to describe a static/class variable is to say that it is associated with its class, and you can access them without having to create an object.

o Instance variables should be declared within the class directly, but outside of any method or block or constructor they can equally be called explicitly.

o Instance variables will be stored in the “heap” memory as a part of the object.

o We can access instance variables directly from an instance area, but from a static area, we can access by using object reference.

o For Instance variables, JVM will always provide default values and we are not required to perform initialization explicitly.

Now, Consider the example below, to further cement our understanding of Instance variables;

We get the error below, immediately on execution;

Now to address the compile error, with the explanation above, we create a new object and use it to access the instance variable.

The code below fixes it;

Another approach would be to access the instance variable directly from an instance area with an object of course, as seen below;

o Local variables will be stored inside stack memory, in essence they will be created while executing the block in which we declared it, once block execution is completed, then automatically, the local variable gets destroyed.

Hence, the scope of the local variable is the block in which we declared it, observe below;

o The only applicable modifier for local variables is “final”, if we are trying to apply any other modifier, then we will get a compile time error.
Ex;

o If we are not declaring with any modifier, then by default, it is “default”, but this rule is applicable only for instance and static variables, and not for local variables.

In its simplest form, local variables are described by creating explicitly declared variables inside a method within a class, and their accessibility is limited to said method. In other words, you can neither access, nor can you modify them from outside the method, and also just like the instance variable, an object is required to call any action from the method.
Ex;

(ii.) Instance and static variables can be accessed by multiple threads simultaneously, and hence they are not thread-safe, but in the case of local variables, for every thread, a separate copy will be created, and hence local variables are thread safe.

Observe the example below:

Finally, before we go, let’s take another look at Arrays.

• Uninitialized Arrays
We want to simply show and in essence, convey the behavior of variables with arrays in the expressions below, now considering Uninitialized arrays:
Consider;

Now for the three variable levels, we can express Uninitialized arrays at:
I. Instance Level

Note; Once we create an array, every array element by default is initialized with default values, except at the local level of course, as shown.

8 Benefits of DevOps Companies Cannot Stay Away from