To write python code you will need some sort of a text editor or an IDE (Integrated Development Environment ) to highlight and execute the code you write, when you install python it comes with its own IDLE, it contains two main components: the shell and the text editor. The shell appears when you run the code, you can also type a code that you want and it will be executed immediately, for now, we want to use the text editor. you can search for it and double-click it to open it, if you are done, you are ready to go and continue the tutorial. open a new file from the file menu. 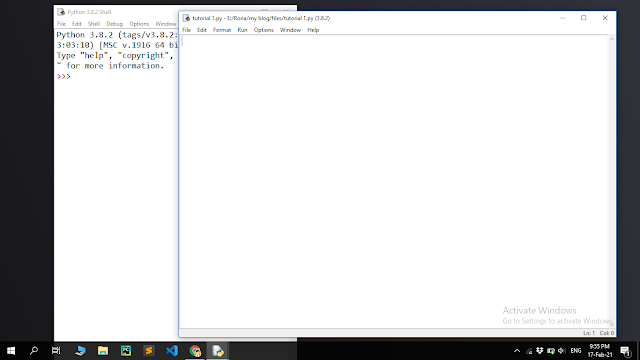 What is a Variable?

A Variable is nothing but a container where you can store a certain value. Variables can store different types of data(We will talk about data types later). To declare a variable you have to give it a name and assign it to a value using the assignment operator " = ". A valid variable name has certain conditions :

*you can declare a variable as below:
*

to show things on the screen you can use print() and type the thing you want to show or the variable name:

1 . Everything greyed out (not highlighted) after " #" is called a comment, you write them to explain to yourself and others what the code does.

2 . In Python we don't put a semicolon "; " after the end of each line, you don't have to do it as you do in many other languages as Dart for example.

Are you planning on becoming a web developer in 2022 (or do you know someone who is)? If so, what do you need help with?

If This... Then That

Rawan Amr Abdulsattar
An Egyptian Intermediate 15-year-old girl programmer. My hobbies are programming, reading, writing, playing volleyball, and playing chess
You decide the topic and I will write about it for you😇💜
#tutorial #programming #discuss #codenewbie
A young programmer's story 👩‍💻 : Yes, it's just me 😄😇
#discuss #programming #newbie #beginners
My Roadmap 2022 : you are not a real developer yet 😅
#beginners #android #flutter #codenewbie
Log in Create account