I have been in active software development for the better part of the last year and a half. For the majority of that period, I've come to appreciate the power of git, especially since the onset of the pandemic, where I've been working remotely 90% of the time, the technology has been very crucial in the development of my career.
The aim of this post is to highlight some of the common git commands that I use on a daily, which I'm sure most of you reading this will apply at some point or do also apply. The post is also meant to deconstruct the notion that git is complicated. Hopefully, you'll gain new insights into it. Let's dive in...

This article is divided into four parts:

*Disclosure: I only recommend products I would use myself and all opinions expressed here are my own. This post may contain affiliate links that at no additional cost to you, I may earn a small commission.

Before we move to the commands, it's important to familiarise ourselves with common terms used in the git world.
Let's have a look at some of them.

A thing to note about this is that for an initial repo, especially if it was initialized with a README file, it might bring in errors such as the remote having contents you do not have. Another one could be that the repo has unrelated histories. So before you push code make sure to first pull from the remote by specifying git pull origin master —allow-unrelated-histories

Reverting to a previous commit.

Often times you may realize that you made a mistake and would like to roll back to a more stable version of the project. Luckily, git offers solutions to this problem. We can choose to either use git revert or git reset commands. For the purposes of this guide, I'll go with git revert as I have more experience using it. However, for in-depth analysis and comparison of both commands, you can have a look at this article from atlassian.
The first step in rolling back is to identify at which point you'd like to go back. For this, we'll use our friend, git log 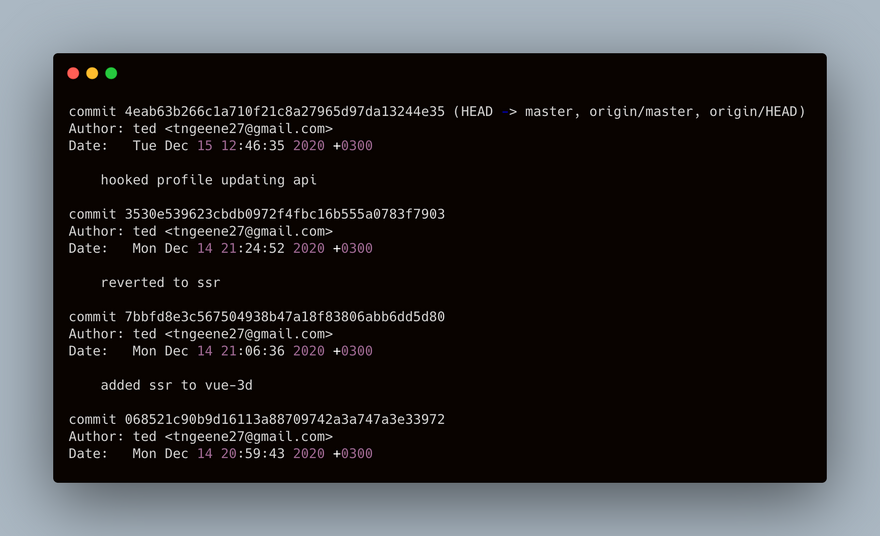 Notice the ordering of the commit history, with the "HEAD" being the first one on the list. If we want to go back to the commit with the message "reverted to ssr", we would run

This will revert everything from the HEAD back to the commit hash, meaning it will recreate that commit state in the working tree as if every commit after 4eab63b2 had been walked back. You can then commit the current tree, and it will create a brand new commit essentially equivalent to the commit you "reverted" to.
The --no-commit flag lets git revert all the commits at once.

Note that we've used the commit hash of the commit above the one we'd like to roll back to.

There is of course more than one way to revert, but this is what works for me. Feel free to add to the discussion on best practices to revert in the comments.

While working with git, it vital to follow some practices, especially working with a team. The practices I'll mention are my personal preference and totally biased towards my own views.

It's important to let other developers working on the project on what exactly you've been working on. writing a commit message such as "fixed loader on landing page" instead of "landing page update" goes a long way in informing the code reviewers of what you've worked on.

Once you've pushed your changes to Github if on a feature branch, remember to make a pull request(merge request in GitLab). This will notify project owners of a request to integrate your changes into the main branch and they can do a code review.

Still, on the subject of pull requests, it's important to let code reviewers know why you'd like your code to be merged into the main branch. An example of a pull request message would go along the lines of;

As a minimalist, I believe that it's best to work on bits of the code and push them instead of making revisions on many files and pushing them at once. My case for this argument is that it provides for good tracking in case things break at some point, we can just roll back to the commit and undo the minor mistake made on a couple of files instead of multiple files, which can prove to be a nightmare.

That covers the end of this article. There's a ton of information on git, but for now, we'll only dive into the shallow end that is the very deep pool of git. I hope this piece helps someone and feel free to drop your thoughts. You can also check out my website or follow me on Twitter.

Include a gitignore file

When working on a project, there are some directories and files you'd prefer git not to track as well as some files which are not recommended to be tracked, an example being the node_modules files in node.js. This aids in reducing boilerplate code since the files are still going to be recreated in the other developer's machine. I found this interesting GitHub repo containing a list of popular .gitignore templates for most frameworks and languages.

This section highlights some useful resources to get you started with git. It includes videos, blog posts, and podcasts.

Thanks for going through the article. I hope in one way or another, you have a better understanding of git. Cheers!