Switching careers after already having a steady one is a scary move, but what should one do when they see the writing on the wall for the career they are currently in? I currently work as a pharmaceutical reverse-distributor for independent pharmacies in the southeastern region covering South Carolina, North Carolina, and Georgia. However, independent pharmacies are struggling and closing at a rapid rate so I decided that it was time to look into something that I knew would be future proof and something that I would enjoy. I also have a wife, three kids, and a dog to think about since I am currently the sole earner in the family. But now that I have been learning online for about a month, I feel like I have made a good decision.

I have always loved using tech, and keeping up with the latest and greatest gadgets, but I always thought getting into the field would be tough and that it was reserved for those already in the field. However, I received a local community college catalog one day, and saw that there were academic certificates I could get, so naturally I started researching more about the career the way most people do, I googled. I also reached out to some friends and family. I thought going to school was the best route, and I was trying to decide if I should get another degree or go on to get a master's in computer science. But after talking to my brother-in-law Wes, who is an Architect, he suggested that I either learn online or look into bootcamps. Now that I knew I had options, I decided to research to see what the best path would be, and decided to go into Web Development. 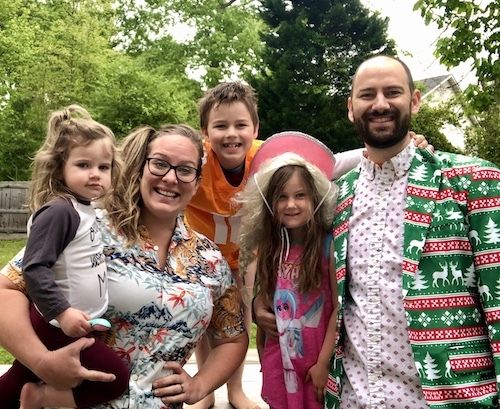 I mentioned before that I already have a full time job, but it's pretty flexible. I also mentioned that I have a wife, three kids, and a dog. Two of my kids are in elementary school and the other is only two. So the main issue was to find out which program would work best while still being able to spend time with family and friends.

Most all of the options have online self paced versions. I didn't find online learning to be a problem because that is how I finished my undergraduate degree, but I also didn't want to go into major debt either. This pretty much caused me to drop the idea of getting a master's, at least for now.

I liked the idea of going to a bootcamp because in my research, I found that networking and working alongside others was important in the tech industry and could open doors. I also liked the fact that a majority had options to pay back tuition after finding a job or the debt would be forgiven. However, a lot of them also had entrance tests. Now, they did give materials to learn enough to pass these entrance tests, but I really needed to figure out if this was something I actually enjoyed.

My last option seemed like the best place to start. Wes sent me a youtube video to see if it was something I would enjoy. It was the "HTML Crash Course For Absolute Beginners" by Brad Traversy on youtube. It is about an hour long, but as soon as I finished I was hooked. I looked up how to get to more learning resources online. I went to freecodecamp.com to start and signed up for a few courses on Udemy. These are great resources because freecodecamp.com is free and Udemy has full courses for a really good price.

Here's to the Future

I have now been doing this since Thanksgiving, and I have tried to do something everyday. I finished my first course on Udemy already and know quite a bit of HTML and CSS. I also decided to try some trials on both Scrimba and Udacity to see if I am ready to take my career change to the next level by learning even more.

Bruce
I am a professional hobbyist. Anytime I am building something or riding MTB is where I find my happy place.
Don't Be Afraid to Try Different Learning Methods
#beginners #webdev #codenewbie #css

Once suspended, brucerw3 will not be able to comment or publish posts until their suspension is removed.

Once unsuspended, brucerw3 will be able to comment and publish posts again.

Once unpublished, all posts by brucerw3 will become hidden and only accessible to themselves.

If brucerw3 is not suspended, they can still re-publish their posts from their dashboard.

Once unpublished, this post will become invisible to the public and only accessible to Bruce .

Thanks for keeping CodeNewbie Community 🌱 safe. Here is what you can do to flag brucerw3:

Unflagging brucerw3 will restore default visibility to their posts.