CodeNewbie Community is a community of 5,745 amazing newbies

If you have been developing in Java for a while you may have heard about Java Swing, the native Java GUI library, which you can use to build user interfaces. Using JSwing is great but wouldn't be nice if you could...

If your answers to these questions is yes then JavaFX is the right choice for you! Stay with me if you want to know what JavaFX is, what is the structure of a JavaFX project and how to build your first app.

First of all, JavaFX isn't as old as JSwing, but it isn't brand new either, it came out in 2009 and has been growing ever since, with version 15 being the latest version released and version 16 being just around the corner.

According to Oracle, JavaFX is a development platform for building desktop apps using graphics, animations, transitions and so on, is intended to replace JSwing as the standard GUI library for Java (so good thing you are learning it huh?). Since version 11 of the JDK came out in 2018, Oracle made JavaFX part of the OpenJDK project under the un-creative name of OpenJFX.

So, that's the what, now let's focus on the how. How can you build something with JavaFX? First you need to learn some new concepts that weren't present when working with JSwing.

JavaFX uses some of the concepts of theatrical performance to name the components of it's architecture. Not sure what I mean? Let's begin.

The stage is the top level JavaFX container, and it often refers to the window itself. Think of it as an actual stage where the play takes act.

The scene is the local JavaFX container and it refers to the actual views of your application. Think of it as the background elements of a play, they bring life to the stage and change from time to time depending of what is needed.

These scenes are actually FXML files (FXML is markup language similar to XML) that you can construct using any text editor, but you can guess how boring would that be. Luckily for us there are tools that let us drag and drop components just like we would do in JSwing (more of that later).

So we have the stage, the scenes, what else do we need? Hmm... that's right! The actors! They are responsible for making the actual play. In JavaFX, these actors are the nodes, and they refer to the GUI elements like buttons, panels, lists and so on. As a matter of fact, every GUI component extends from the Node class.

I mentioned early that the way you build the views AKA the scenes of your applications is by creating FXML files.

In this example GridPane is the root layout but note that is it not mandatory to use it everytime, there's a couple of layouts you can use to organize your components.

From there you could start to add more elements, just like you would do in regular HTML, but you can see this would be very time consuming, that's why Scene Builder was created.

Scene Builder is a "visual layout tool that lets users quickly design JavaFX application user interfaces, without coding". In other words, is a tool that let's you generate FXML files (views) in a visual way by dragging and dropping components in your base layout. 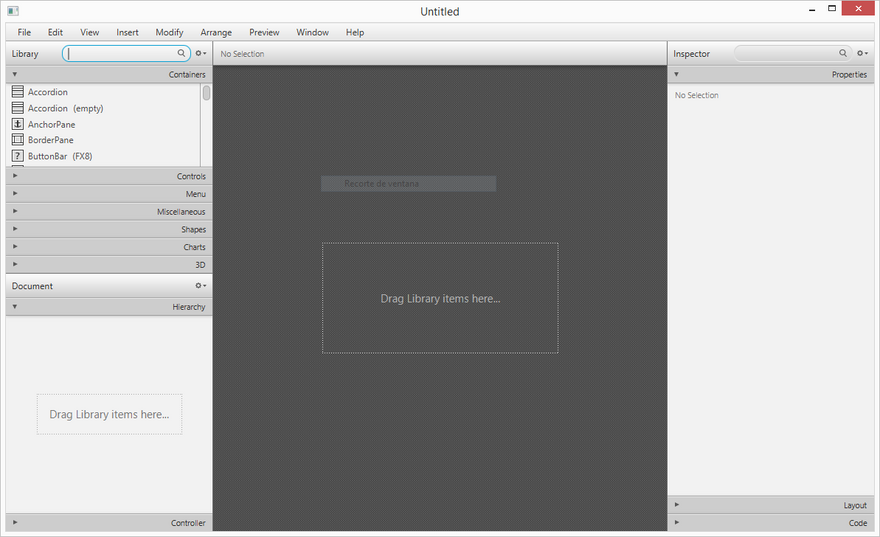 Go ahead and download Scene Builder if you want to dive with me in a practical example, you'll see how easy it is to edit scenes with this tool!

(Side note: I'm assuming you are using JDK 8. JavaFX is no longer bundled in JDK version 9 and up so if that's your case, you need to download the JAR file and add it to your project PATH)

I will be using IntelliJ but the steps are somewhat similiar in NetBeans.

Open your IDE and create a new project, you will be prompted to select which type of project do you want, select JavaFX. 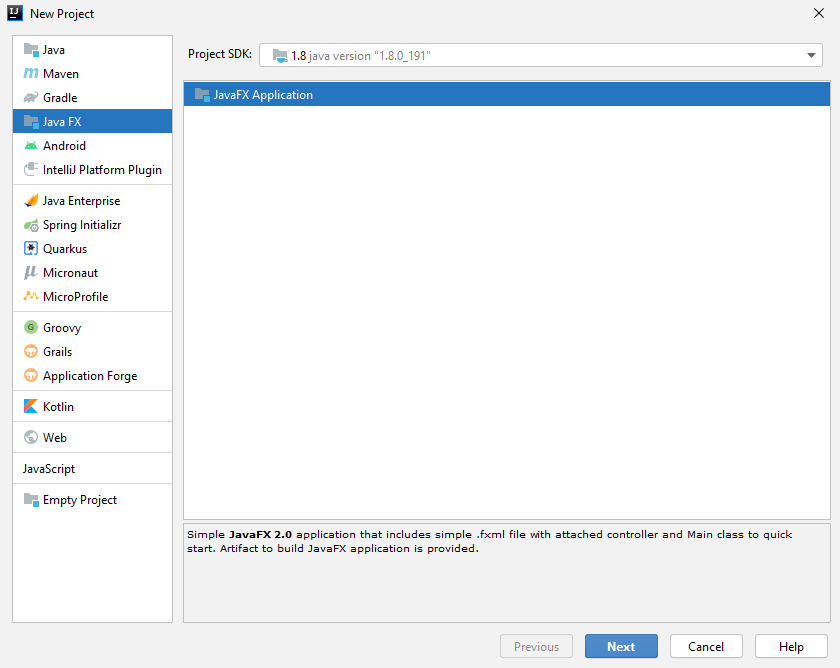 After a few seconds you should have a freshly new JavaFX project. Before going further, let's run int and see what we have. 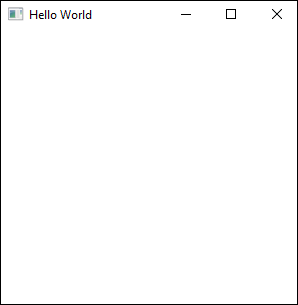 We got a nice looking window saying "Hello Wold" on the title. Nothing too fancy just yet. But how did that window pop out into existence?

Let's take a look at out Main class and see what's going on...

First we notice that the Main class extends from the Application class, that's interesting.

Second we go to the main method and see that it calls the launch method. Now we don't actually see it but this method is defined within the Application class, and it's responsible for initializing our app. Later on when everything has been set, it actually starts the app by calling the start method, yes, the one we are overriding here. Let's take a closer look.

The start method receives an argument called primaryStage of type Stage, sound familiar? This is the window we see that it pops out! But how do we put content in there?

(Side note: These steps are just a placeholder. You don't need to do it in this exact order!)

Now let's take a look at the project folder structure: 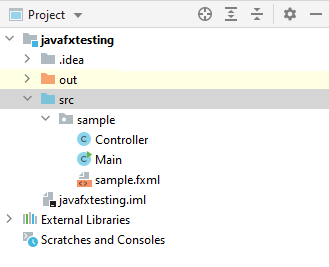 Nothing too fancy here but note there's a Controller class there. Every scene you create needs a Controller. The controller is responsible for handling things like events, inputs, outputs and so on.

One of the advantages of building apps with JavaFX is that the presentation layer and the logic layer are not tigthly coupled. The controller can function any scene and visceversa as we can always abstract the components we use.

The way we tell our view which controller to use is with the fx:controller property. Go and double-click the sample.fxml file, you'll see this property has already been set for you:

It's important to note here that the path is relative to the root package, in this case, sample.

Let's move on and edit this view! If you downloaded Scene Builder you'll see that when you right-click the sample.fxml file, there's an option called "Open with Scene Builder" at the bottom. (If you are on NetBeans it automatically opens it when you double-click it).

When you open it you will see there's a panel with the title of "Document" and below that there's the "Hierarchy". This list contains the node tree of our application.

Let's begin by deleting the GridPane element and replacing it with an AnchorPane (you can look up the element by typing its name in the search bar). When you got it just drag it and drop it in the middle of the screen.

Next you will see on your right a new panel called "Inspector". In this panel you can edit all the properties of your elements. In this case we will edit the width and height of our Anchor Pane (since this is our root element, these numbers will define the dimension of our window). You can put the numbers you like, I'll put 200 x 200. 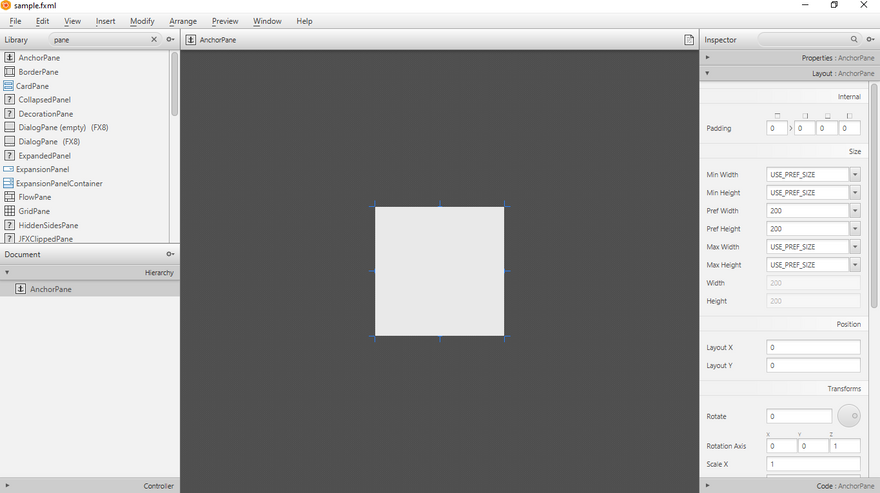 Nice! Now we have our scene ready, let's put some actors in!

We will do so in the next part of this post. Thank you so much for reading this far. If you have comments please leave them down below.

See you next time 👋.

How to professionalize your little work project

What is Code Coverage?