In order to make the traditional Tic Tac Toe Game unbeatable, it is necessary to create an algorithm that can calculate all the possible moves available for the Computer and can use that to determine the best possible move.

To solve games using AI, we will introduce the concept of a Game Tree followed by Minimax algorithm. This algorithm sees a few steps ahead and puts itself in the shoes of its opponent. It keeps playing ahead until it reaches a terminal arrangement of the board (terminal state) resulting in a tie, a win, or a loss. Once in a terminal state, the AI will assign an arbitrary positive score (+10) for a win, a negative score (-10) for a loss, or a neutral score (0) for a tie.

Minimax (sometimes MinMax, MM or saddle point) is a decision rule used in artificial intelligence, decision theory, game theory, statistics, and philosophy for minimizing the possible loss for a worst case (maximum loss) scenario. When dealing with gains, it is referred to as "maximin" - to maximize the minimum gain. Originally formulated for n-player zero-sum game theory (one player wins (+10) and other player loses (-10) or both of anyone not to win (0)), covering both the cases where players take alternate moves and those where they make simultaneous moves, it has also been extended to more complex games and to general decision-making in the presence of uncertainty.

How does it work?

To check whether or not the current move is better than the best move we take the help of minimax function which will consider all the possible ways the game can go and returns the best value for that move, assuming the opponent also plays optimally until it finds a terminal state (win, draw or lose). 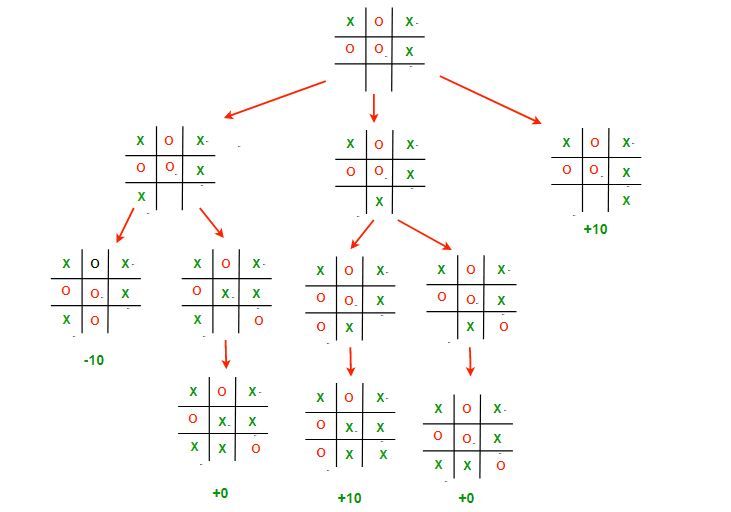 This image depicts all the possible paths that the game can take from the root board state. It is often called the Game Tree.
The 3 possible scenarios in the above example are :

Remember, even though X has a possibility of winning if he plays the middle move, O will never let that happen and will choose to draw instead.
Therefore the best choice for X, is to play [2,2], which will guarantee a victory for him.

Moving from JavaScript to TypeScript

Once suspended, dhhruv will not be able to comment or publish posts until their suspension is removed.

Once unsuspended, dhhruv will be able to comment and publish posts again.

Once unpublished, all posts by dhhruv will become hidden and only accessible to themselves.

If dhhruv is not suspended, they can still re-publish their posts from their dashboard.

Once unpublished, this post will become invisible to the public and only accessible to Dhruv Panchal.

Thanks for keeping CodeNewbie Community 🌱 safe. Here is what you can do to flag dhhruv:

Unflagging dhhruv will restore default visibility to their posts.