This time last year I was laid off. I had been working as a content writer for a local radio station — my first real job coming out of university. I had come out of school with a major in English and a goal to pursue a career in writing, so when I scored the job at the station I thought I was pretty much set. The truth is, I am very grateful for the opportunities I was given at the station. I was able to spend my time writing content for Toronto, interviewing local talent, meeting musicians that I admired, and even learn a thing or two about voicing for commercials. It was all pretty rad, and I made some great friends along the way. But when I walked into work one day and left without a job, I was forced to reflect on the choices I had made for myself and the choices I had yet to make for my future.

If you had told me just over a year ago that I would become a programmer I would have probably (absolutely) laughed. For the majority of my life, I stuck to what I knew: creative writing. I excelled at any writing-intensive class in high school, which led to my choice to major in English. I actually went into my undergrad with a very strict plan to become an English teacher, which I very quickly changed my mind about.

My first real run-in with programming happened in the second year of my undergrad. I had been volunteering most of my time to writing for the University of Guelph student newspaper, the* Ontarion. Next to reading the greats, music was my first love. My parents’ common denominator was their love for music — and that definitely rubbed off on my siblings and I growing up. Once I figured out that I could get into free concerts in exchange for a 500-word write-up, I jumped into chasing my new dream of becoming a music journalist. *Almost Famous might have also had something to do with it. Regardless, it felt so great to be able to combine two passions into one. 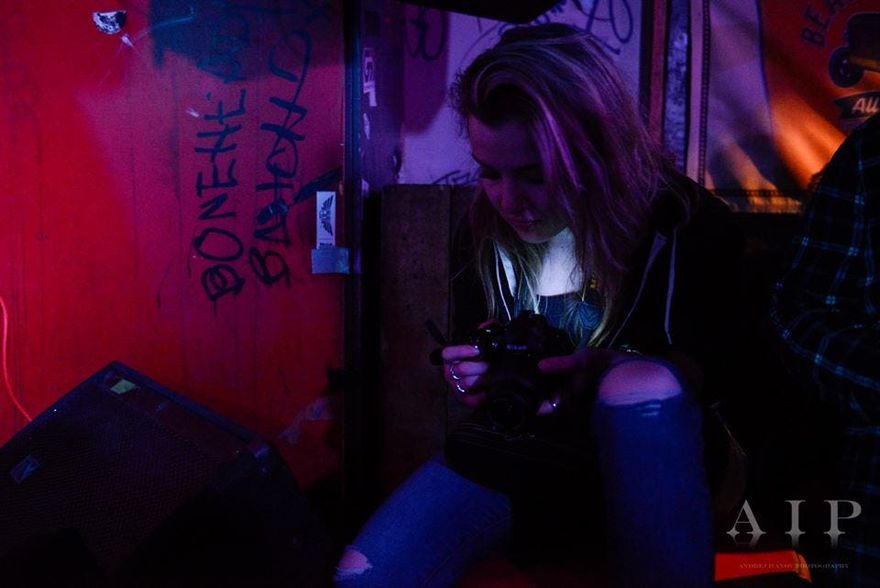 Man, I still remember the day I had my first byline published in the newspaper. I was standing in the middle of the University Centre, reading my very own article in print entitled *Are Vinyl Records Making a Comeback?* It was surreal.

Music writing led to starting my own blog — a WordPress blog I called SeamstressForTheBand (which, in hindsight, probably would have led to serious copyright issues). Believe it or not, this blog is still up — you can view it **here** if you’re curious.

Here’s a screenshot of the header. Try not to laugh at my design skills.

After creating an account and choosing a theme, I decided to learn some HTML (Hypertext Markup Language) and CSS (Cascading Style Sheets) in order to customize the site. For those who aren’t familiar, HTML is a markup language used to create web pages and applications (if you’ve ever seen a

Pro tip: If you’re using Chrome, hit command + option + i (Control + Shift + i for PCs). This will open up development tools in your browser. Click the ‘Elements’ tab at the top and you will see a whole bunch of HTML and CSS — everything that’s making up the page you’re looking at right now.

I digress. The point here is when I started SeamstressForTheBand, I had my first exposure to programming. It was small, and I didn’t think about it much because my main motivation was to get my blog up and running so I could start interviewing local artists around the city and publish my work. 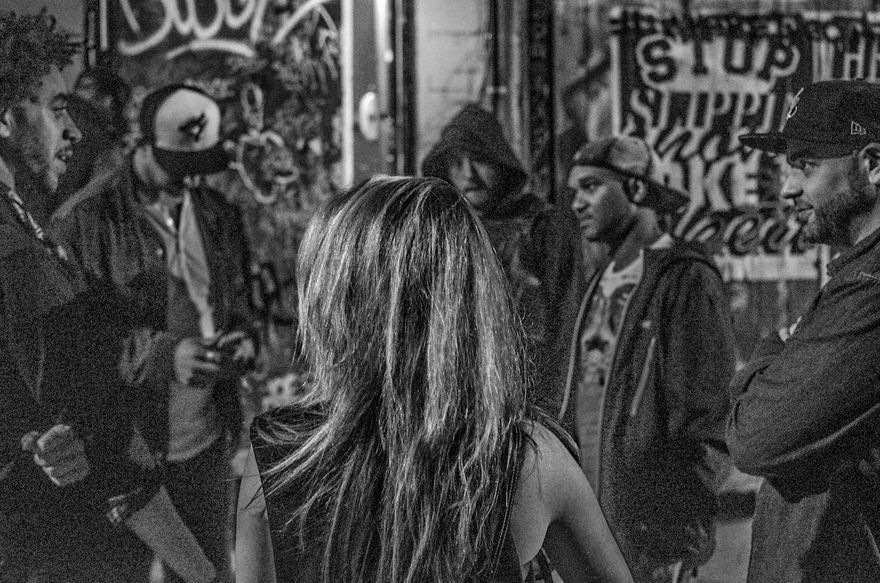 A few months later, a web editor position opened up at the Ontarion and I jumped on it. Getting this job meant my first paid position as a writer — something I desperately wanted. I knew the Ontarion’s site was hosted on WordPress, and all the job posting asked for was a little bit of experience with HTML and CSS, which I could prove I had with my blog.

I stayed with the Ontarion for the remainder of my undergrad, graduated in 2015, and stayed for another year to work as Arts & Culture Editor. I would soon be moving on from Guelph to work in Toronto at a local radio station as a full-time content writer.

So that’s all great and fun, but why learn to code? Isn’t that why you’re reading this in the first place? The truth is, my decision to code wasn’t something that came out of a steady decision-making process. There was a little bit of weighing pros and cons involved, but my decision to attend BrainStation — a digital boot camp that offers various programs, including web development — was the result of compulsiveness, some erratic thought processes, and a few serendipitous events.

The summer before I was laid off, I knew that I wasn’t where I was supposed to be — I didn’t feel like I was living up to my potential. I had fallen into that trap where you turn your passion into work and it no longer feels like a passion. My creativity had plummeted and I didn’t have much of a direction. To put it simply, I felt stagnant. I was also deeply depressed for a long time — I was diagnosed with major depressive disorder (MDD) the year after I graduated university (something I’d like to write about more in the future), and this became a leading factor in my decision to make a career change. There was a lot to take into consideration.

I had learned about BrainStation through reconnecting with a friend (she is one of the most inspiring people I know, you can check out her blog **here**). I had noticed that she was making a lot of career moves and I asked her about where it all started — she told me she graduated from BrainStation’s User Experience Design program. She also told me about their coding program, and something lit up inside my brain when I heard this. Until that point, I hadn’t reflected on how I felt about web development. I thought about my past with blogging — in retrospect, I had really enjoyed it. The code part was something that came intuitively to me.

There is a missing piece to this puzzle, and that is my mom. I was raised by a programmer. I learned how to use a computer before I could do anything else. Growing up, my house was the place that friends brought their computers after getting the blue screen of death, in hopes that my mom could fix it (and she always could). I have vivid memories of her bringing our family computer back to life after my brothers and I put it through hell and back using LimeWire and clicking pop-ups on eBaum’s World.

I attended BrainStation’s Winter 2018 cohort, which meant I started pretty much the first week of 2018. The program was 10 weeks of class, full-time Monday to Friday. And my god, it was hard. It was friggin hard. JavaScript week proved to be one of the most challenging weeks of my life. I’d like to reiterate the fact that I was never great at math — I was an English major because I was right-brain heavy. So when it came to learning a real programming language, I essentially had to train my brain to think in a way that I wasn’t used to. I had to problem solve and think logically. It took me 72 hours of talking out loud to myself to figure out what a ‘for loop’ did. Object-oriented programming? Cool. I had no idea what the hell that meant. I like to imagine that up until that point, my left brain was covered in cobwebs and all of a sudden was being called forth to work. It was very, very difficult and there were countless moments where I seriously considered giving up.

I often tell web dev students that much of learning to code involves a battle with your own psyche. When I first looked at a line of JavaScript, it looked exactly like it was; a foreign language. There were variables, weird symbols, and math. I was shook. All things that I dreaded in school. However, I had great teachers. The amount of support I received during that program was incredible, and I think that was what I was missing growing up. To put it bluntly, I didn’t have good math teachers in high school. Our education system was designed to cater to a certain type of learner, and anyone who doesn’t fit into that very tight box will have a hard time making the grade.

I learned a lot about myself while learning to code too, specifically about how I learn. Everybody learns differently. For example, I’m a visual learner — I like to draw things out, I like to visualize. In the same way that you plan an essay before you write it, before I write code I write out my thought process on a good ol’ fashioned sheet of paper. I drew my entire final project — a React Native app — out on a whiteboard.

I also learn through metaphors — one of my favourite explanations of the way HTML, CSS, and JavaScript work together is to think of HTML as the noun, CSS as the adjective, and JavaScript as the verb. That’s just one example of many comparisons that I’ve learned along the way, and when I returned to BrainStation as a teaching assistant, I taught code using these techniques.

Needless to say, I’ve fallen in love with something that I never thought I could fall in love with. The world of programming is like walking into a record store — there is so much to choose from, so much to discover, and so much you haven’t heard. It’s beautiful and overwhelming at the same time. It’s a community that I fit into, which is something I haven’t felt since writing at the Ontarion. A community of like-minded people who are passionate about tech and just want to bounce ideas off each other, start new projects, and get their hands dirty. It’s wild. And the friends I have made along the way have been my biggest and most important takeaway from this whole experience.

And that’s pretty much my story. It’s an ongoing one, and I’d like to continue writing about it. I’ve been in the industry for about 10 months now, so there is still so much for me to learn (and write about). But if I’ve learned anything in the last three years, it’s that, like this blog post, life isn’t linear — shit happens, opportunities open up, people change, YOU change, and you just never know where you’re going to be a year from now, let alone five years from now.

Feel free to add me on LinkedIn or check out my website.

Alter multiple objects at once

I Started a JavaScript Stream on Twitch!

Once suspended, dsubject will not be able to comment or publish posts until their suspension is removed.

Once unsuspended, dsubject will be able to comment and publish posts again.

Once unpublished, all posts by dsubject will become hidden and only accessible to themselves.

If dsubject is not suspended, they can still re-publish their posts from their dashboard.

Once unpublished, this post will become invisible to the public and only accessible to Dani Subject.

Thanks for keeping CodeNewbie Community 🌱 safe. Here is what you can do to flag dsubject:

Unflagging dsubject will restore default visibility to their posts.