Why edit a GitHub Action?

There are many reasons to edit a GitHub Action. Perhaps, you found an Action suited to your use case. It's almost perfect, but there's just one minor feature missing. Maybe you noticed a bug or edge case, or you have an idea to take the Action to the next level.

One solution is to recreate the Action, make it your own, and add all the improvements you desire. The second and my preferred solution is to make a pull request for the Action you are already using. The latter encourages you to treat the Action as an open source project. In return, the benefits include:

Caution: Make sure you get the author's approval to add changes to their Action. The easiest way to do this is by opening an issue and starting a discussion with the author and/or other contributors. You don't want to spend time opening a pull request that the author doesn't want, and will eventually reject.

I picked up an issue earlier this month, but I didn't work on it immediately because of the holidays. When I returned a week later, a contributor reassigned the issue to themselves and opened a pull request.

While I was impressed by the contributor's eagerness, speed, and clever solution, I felt disappointed for a brief moment. Until a friend and frequent contributor, @mtfoley, helped me realize the root cause of the problem: the Contributor Take Action had a minor bug.

The TLDR: The Contributor Take Action allows contributors to self-assign issues by typing ".take" in a comment. However, if another contributor comments ".take" after the initial contributor self-assigns the issue, the Action will assign that issue to the subsequent contributor as well.

Matthew helped me transform my disappointment into opportunity: I could fix the bug in Contributor Take Action. I will still get to push code, and I could reduce the chance of miscommunicated reassigned issues in open source projects that use this Action.

How to Test and Edit

Contributing code to a GitHub Action is similar to contributing to any open source project. 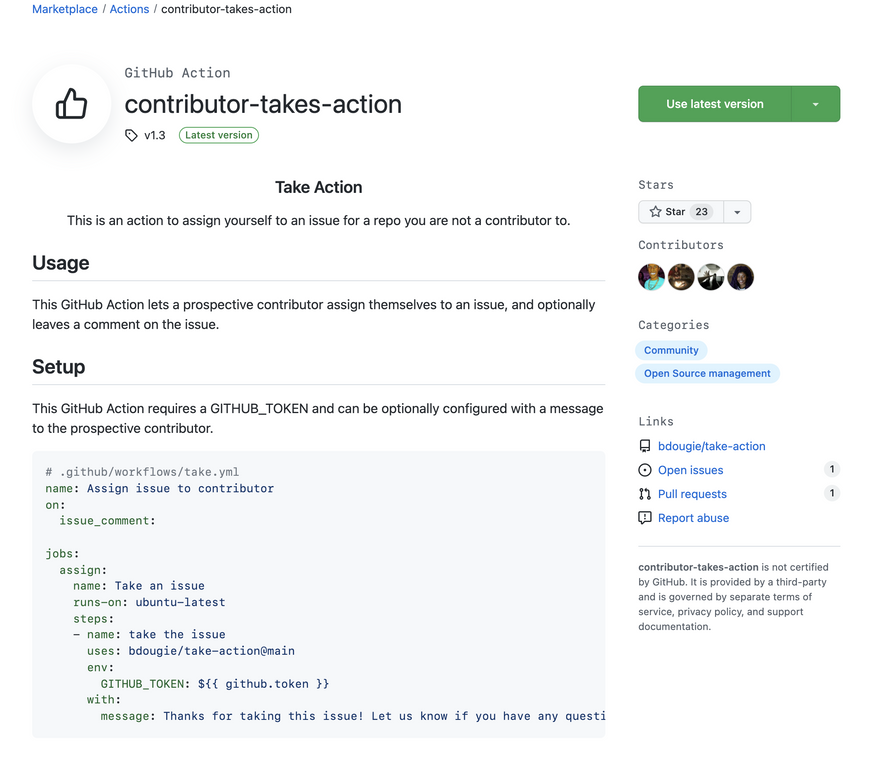 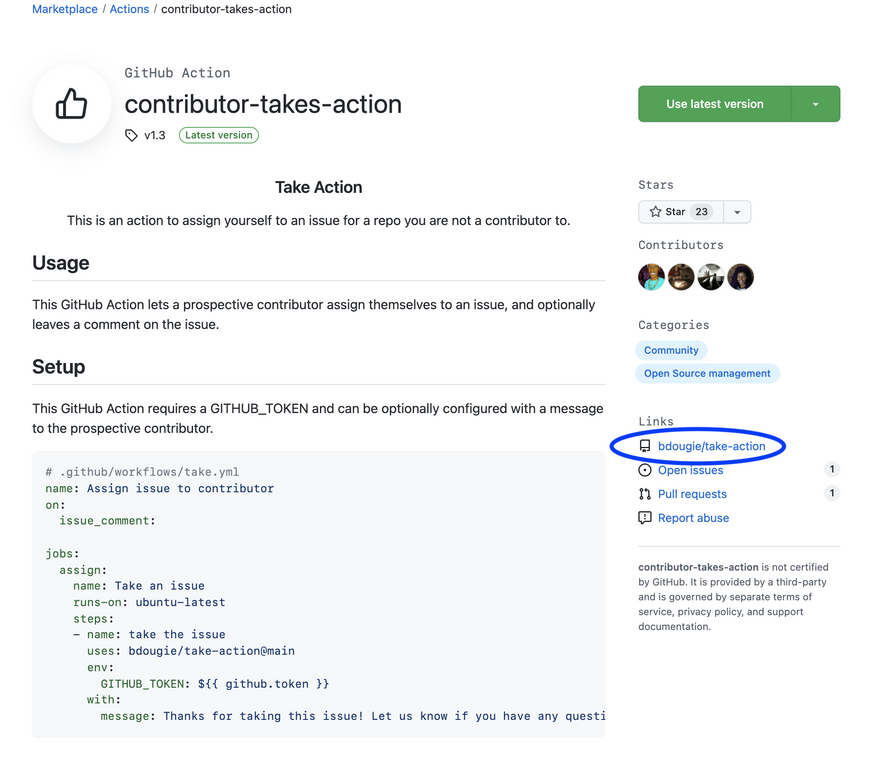 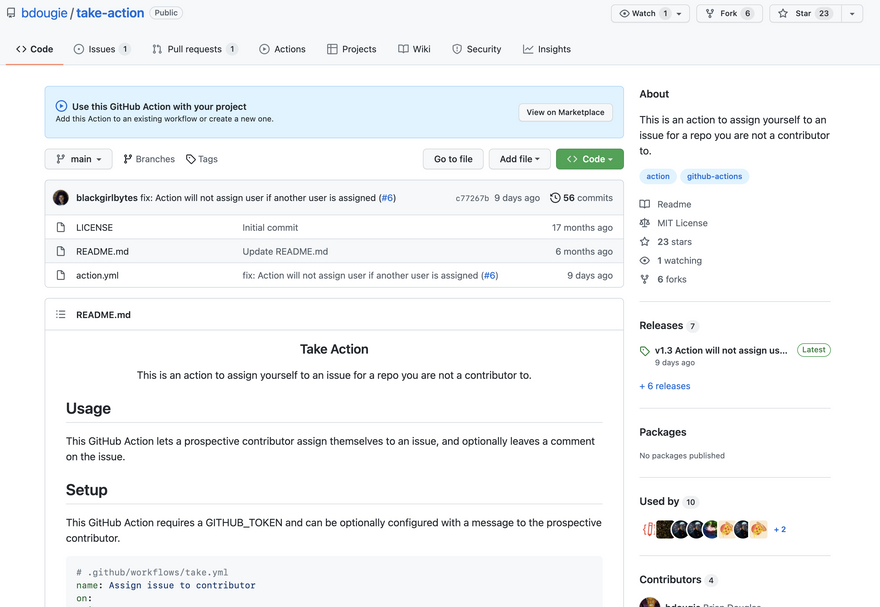 Step 3: Fork the repository by pressing the fork button on the top right. 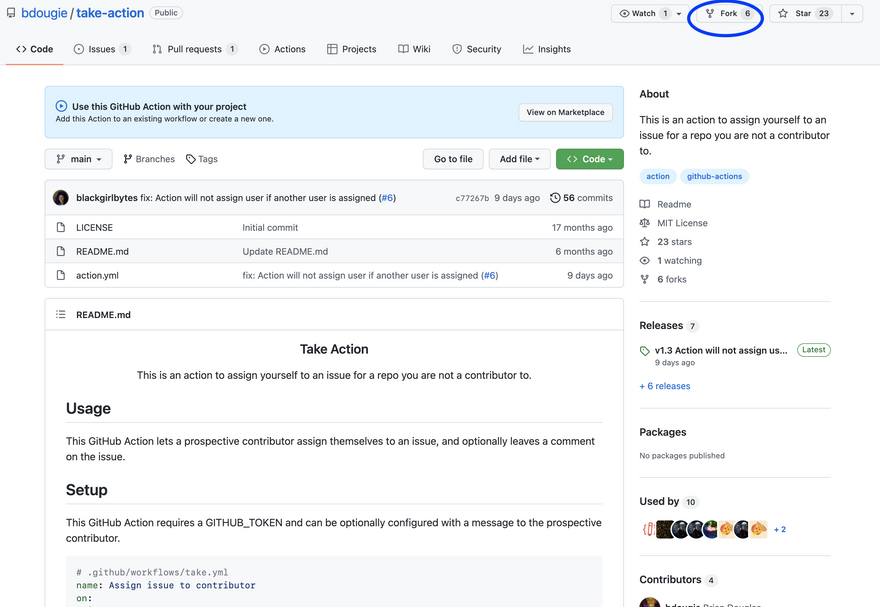 Step 4: Once the project is forked, you should have a copy of the repository. Head over to your copy and clone the repository or open it up in Codespaces. 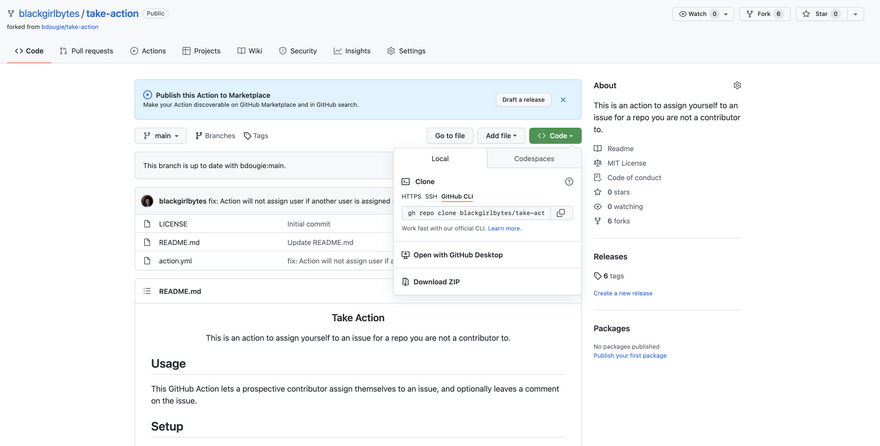 Step 5: Set up a repository for testing and follow the directions written in the Action’s ReadMe.

Step 6: Point the workflow to your forked Action. You can even point it to a different branch or commit. It should look like:

For instance, I changed

Step 6: First, let's check that the Action is working as expected by triggering the Action. After I committed and pushed all the files from the set up above, in my case, I opened up an issue and commented ".take" from a GitHub user account I created for testing. To be clear, I did this in my repository that is using the Action called deploy-with-actions, not the repository for the Action. As expected, I received a message that said, "Thanks for taking this on! If you have not already, join the conversation in our Discord."

Step 7: Time to debug! Try editing your Action and adding a few log statements. You can read the documentation here to learn more about debugging logs. Here’s an example of some edits I made to blackgirlbytes/take-action/action.yml on the handle-if-assigned branch.

Step 8: Check the results by reading the Actions logs and continue to modify the code until you get your desired results. I found my Actions logs by heading to the deploy-with-actions repository and clicking on the Actions tab.

Step 9: Once you have a working solution, commit and push your changes, and create a pull request. Make a pull request comparing forks instead of branches.

You can find my PR here. In this PR, I made a pull request comparing my branch to the author’s branch.

Although this solution was successfully merged, I have more to add. My initial implementation doesn’t comment or assign the subsequent contributors, but now I’m working on adding a response or feedback for contributors to understand why they weren’t assigned if the issue was already assigned to another contributor. You can check out my work in progress pull request here.

Can someone with some experience help me?