When implemented well, these traits make doing the hard, challenging work in a game so addictive.

Recently, scientists have extended the importance of these traits to inspire action in the real life as well. Vague goals and delayed feedback often kill our motivation to do challenging work.

Writing well is challenging. Therefore, it's important that you have clear goals and small feedback loops to keep yourself motivated.

Level-4 of writing well is about creating a good goal and feedback system of writing articles. 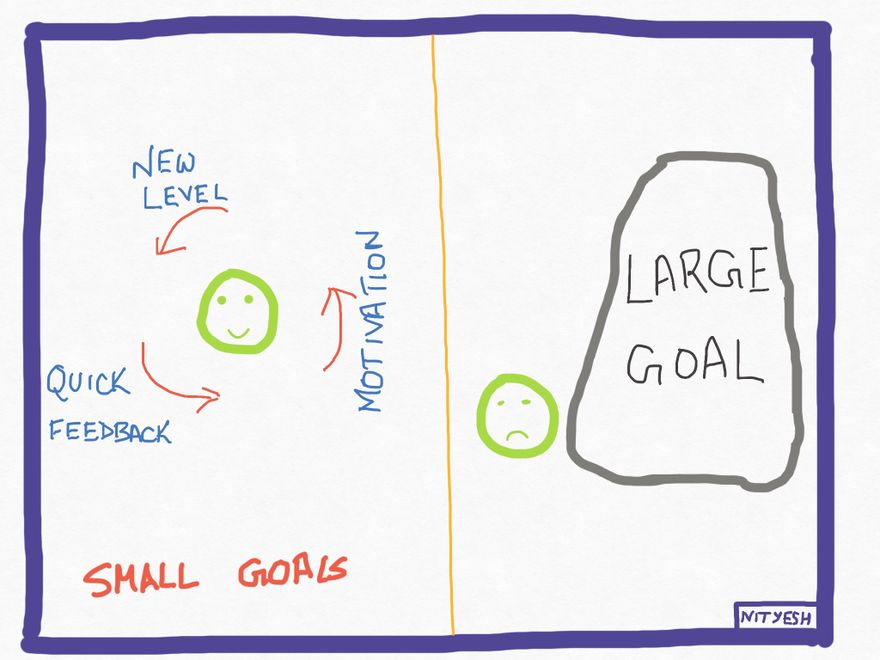 This system will help you avoid the much dreaded - Writer's Block!

Writer's Block is the mythical devil that trips writers and leaves them paralysed and struggling to express themselves.

You should beware of it - it manifests itself as 2 hurdles:

You want to write something good but you can't think of anything interesting.

Whatever you can think of feels either uninteresting, unimportant or unoriginal. You have no idea where to start. You simply can't focus.

Sometimes, you have an exciting idea in mind but you are still paralysed by a lack of motivation.

Maybe the idea feels too grand, too important and thus, too daunting for you to work on it. The thought of completing a whole article makes you exhausted before you even start.

Overcoming the hurdles to finish Level-4

Writing a new article from scratch leaves your whims in control of your writing. It leaves you prone to the Writer's Block. You write only when inspiration strikes while other times, you simply sit and tear your hair.

But good writers don't wait for inspiration to strike.

Therefore, you should adopt a process where you can take small steps to succeed all the time. Even on your bad days.

I analysed the creation process of some writers and discovered one thing that was common in all their processes.

Contrary to what you may think, a lot of successful writers aren't attached to one big idea at a time. Instead, they are always working on evolving a bunch of ideas.

This doesn't show a lack of focus - it's what allows them to be disciplined, consistent and professional.

Therefore, I call this flow of ideas an "Idea Evolution Funnel".

How it helps you

Getting in the mindset of working on your Idea Evolution Funnel makes writing feel like playing a video game:

Once you understand the concept of the funnel, you begin seeing it everywhere.

To demonstrate the ubiquity of this funnel, I'm going to pick 3 people who share not just the same name but also the same process of generating ideas.

What's the probability that 3 Davids in the world - who don't know each other - share a common process of creation?

David Perell, the young "Writing Guy", explains his funnel for developing ideas as such: 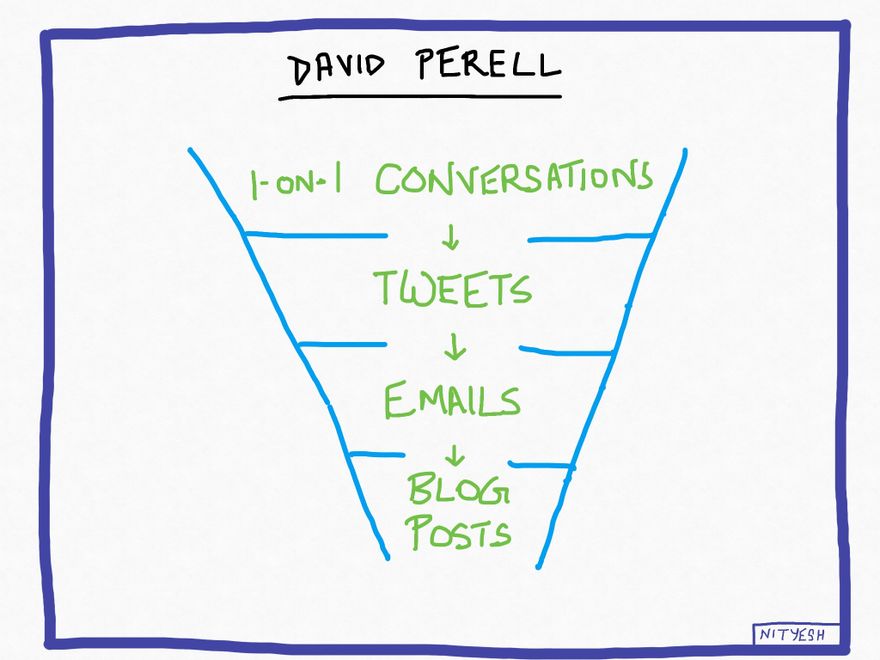 Here's the funnel for David Sedaris, the humourist: 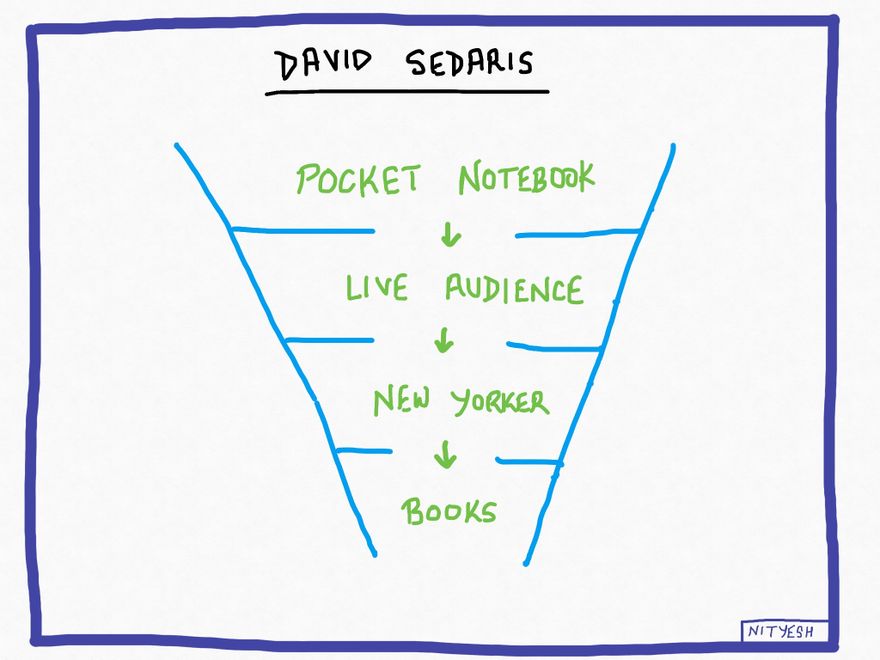 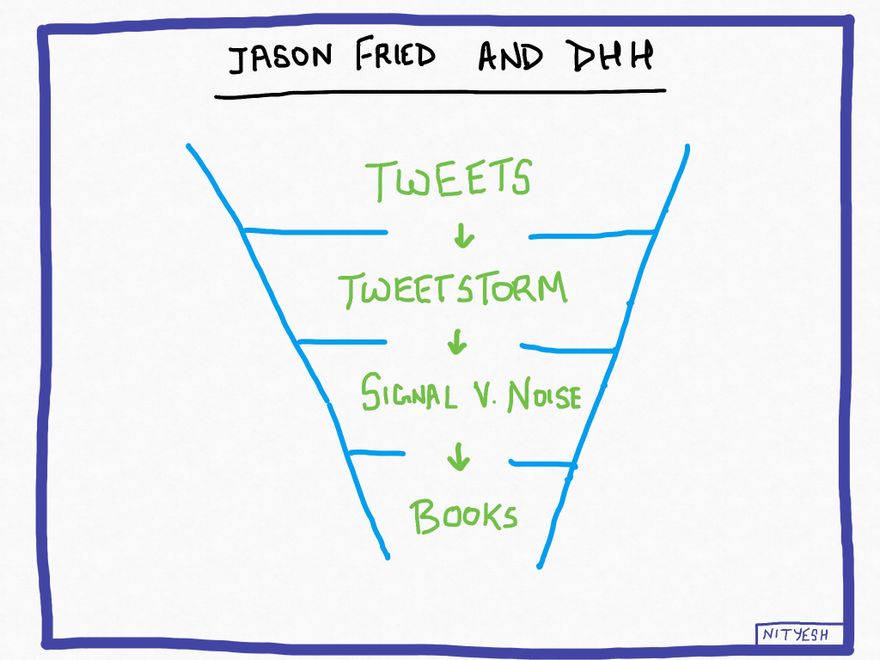 This lesson will get your through Level-4 of writing well. Check out the previous articles in the series to learn about levels 1-3.

In the next few days, I'll publish lessons to take you through the 5th level. So, follow me on Twitter and here to get the updates.

You can also sign up for the Clear Writing, Clear Thinking email workshop to get everything over email.

Along with the lessons, the workshop also contains small tasks that you can complete to practice what you learned.

I'm giving it all away for free!

The tech stack for nocode: the WAMZstack

How to make a calculator (working and animated)

Nityesh
I love writing and teaching • Half a million people have read my articles • My free writing course for codenewbies here: http://bit.ly/cwct101
10 actionable tips and a simple framework to improve your daily writing
#career #codenewbie #writing #tutorial
Good writing is simple writing. And simple writing is not easy.
#codenewbie #beginners #career #productivity
Level 2: Go beyond filling the blank page - A 3-minute guide to editing your article
#career #codenewbie #productivity #beginners

Once suspended, nityeshaga will not be able to comment or publish posts until their suspension is removed.

Once unsuspended, nityeshaga will be able to comment and publish posts again.

Once unpublished, all posts by nityeshaga will become hidden and only accessible to themselves.

If nityeshaga is not suspended, they can still re-publish their posts from their dashboard.

Once unpublished, this post will become invisible to the public and only accessible to Nityesh.

Thanks for keeping CodeNewbie Community 🌱 safe. Here is what you can do to flag nityeshaga:

Unflagging nityeshaga will restore default visibility to their posts.