CodeNewbie Community is a community of 5,807 amazing newbies

When I was learning Java in college, I did not understand the use for interfaces.
You can't define functions inside an interface. You can only declare them. You have to have a class implement the interface to define it's functions and then use them.
That's crazy! Pretty worthless piece of crap I would think. I can just write my classes and their functions normally. Why would I declare them in one place and define in another.
I don't even need to declare them. Just write my functions normally in a class. It's totally redundant.

Confused and curious, I asked my teacher why I would ever require to implement an interface.
Almost immediately, she said that interfaces let you achieve multiple inheritance, while normal classes don't - the textbook answer on the difference between classes and interfaces.
And I was like, so? Even if my class can implement multiple interfaces at once, none of them would contain function definitions.
They would all be pretty useless. I can just drop them all and write my class without implementing them. Be it single or multiple, what advantage do I get by using interfaces?
My teacher did not have an answer to that.

With the lack of a proper answer, me and most (if not all) of my friends resigned ourselves to accept that interfaces are some kind of mysterious artifacts. That, given the right incantation, would help us manipulate the space-time continuum, rip through the fabric of Java ecosystem and use multiple inheritance - the fruit that is wrongly forbidden from us.

Meanwhile, we gave the same answer during our engineering vivas that my teacher gave me. And wrote the same in our written exams.
Something felt off though. And I could never digest this.
It wasn't until later, when I dabbled with Android that I really learnt the purpose of interfaces - as a contract which lets you to enforce that, the classes you work with, exhibit certain behavior.

I still come across people whose primary understanding of interfaces is something that allows multiple inheritance in Java.
And that is so ridiculous - saying that interfaces support multiple inheritance while classes don't, when I ask you what's the difference between the two.
It's like saying that the difference between a dog and a horse is that a dog barks while a horse neighs.
While that is indeed true, you must understand that dogs and horses are fundamentally different animals!
If your understanding of a horse is that of a dog that neighs. Then boy! You're going to have a wild time in a farm!

First off, lets understand why multiple inheritance is not allowed in Java.

Consider there's a class 'Animals'. All animals makeNoise().
We derive two child classes from this class - 'Horses' and 'Dogs'. Both of them override the makeNoise() behavior.
Horses makeNoise() by neighing. Dogs makeNoise() by barking.
Now suppose, for whatever godforsaken reason, a mad scientist decides to mix up the genes of Horses and Dogs together, and make a new species of Animals - Horgs.
When the Horgs makeNoise(), will they bark? Or will they neigh?
This is the infamous diamond problem (aka Deadly Diamond of Death) in object-oriented programming. 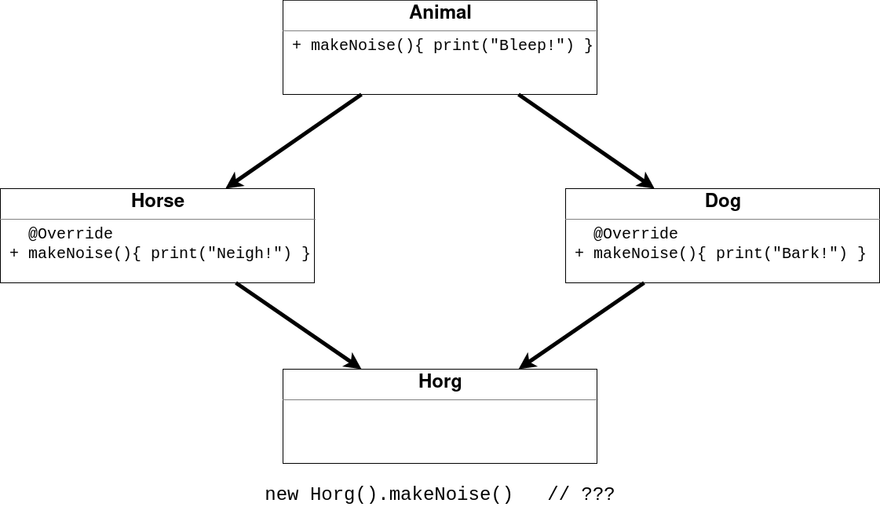 Java doesn't support multiple inheritance with classes simply because inheriting multiple classes together is problematic.
If a class inherits multiple other classes, and these classes contain functions with the same signature, there arises an ambiguity - when I call the said function with an instance of the inheriting (derived) class, how should it behave?
Out of the many function definitions coming from multiple inherited classes, which should be considered?
And how do I control which definition is used when?

C++ tries to handle the Diamond problem using virtual inheritance and scope resolution.
I'm not really a C++ person. And I don't understand how virtual inheritance works.
But, from what I understand, it requires prior knowledge that a certain function may get involved in multiple inheritance. And it requires to be specially handled.
Now that feels weird to me. I did not find many articles on the topic. So, maybe not many people use it. But, please do recommend me any good material on the topic if you have any.

How interfaces solve the diamond problem?

The idea behind interfaces

The practical use of interfaces while writing software

If you know a class implements an interface, then you know that class contains concrete implementations of the methods declared in that interface, and you are guaranteed to be able to invoke these methods safely.
— StackOverflow answer

Often, different teams work together to develop a product. They may work on different features or segments that are integrated together to form the final product.
In such a case, it is obvious that there will be certain inter-dependencies within the teams.

But then, if both the teams start working on their features in parallel, how do we ensure that we'll be able to integrate the online-payments with the cart? In the end, both the features should come together to form the final product, right?
For example, the online-payments team needs the cart to be cleared on successful payment. But, since the cart is not ready yet, how would the payments-team do that? What function should they call? What parameters should they pass to it? What if the cart team doesn't implement such a function at all? And instead, you have to write logic to remove every product from the cart individually?

To mitigate such problems, both the teams must brainstorm about the technical requirements of their own features and realize the inter-dependencies. Once that is done, both the teams can design appropriate interfaces.
For example, the teams decide that on checkout, the cart-system will provide a MyCart object to the payments-system. This MyCart class must implement the Cart interface that has the following methods:

If object provided by the cart-system does not come from a class that has implemented the Cart interface, then the payments-system will throw an Exception.

Due to the principle of abstraction in object oriented programming, the payments-team does not need to know how the emptyCart method works. They just need to know:

Out of these, interfaces take care of points 1 and 3. Point 2 is left to the human intellect.

Basically, by asking the cart-team to implement the Cart interface, the payments-team says,

"Hey cart-team,
We are not concerned about the logic and implementation on your side.
But, we require certain functionality to be present in the object that you pass to us. And we require it in a very specific manner (with so and so name, so and so parameters, so and so value returned).
Please implement these exactly as specified so that we can just plug your cart-system into our payment-system. And we can have a seamless integration."

This was just a simple example of when an interface is used. There might be more. But, I hope it helps you to understand what an important role the interfaces play in software development.
If you can think of more examples, please let me know in the comments.

In computing, an interface is a shared boundary across which two or more separate components of a computer system exchange information.
...
An interface is thus a type definition; anywhere an object can be exchanged (for example, in a function or method call) the type of the object to be exchanged can be defined in terms of one of its implemented interfaces or base-classes rather than specifying the specific class.
— Wikipedia

Also, a lot of people relate interfaces with legal contracts. This is because interfaces are based on mutual agreement between two parties; on how one party could use the services of another.
You meet the requirements in the contract. And you shall enjoy our uninterrupted services.
You fall short on the terms of the contract, we shall no longer serve you.

A contract is like a promise between people. It is an understanding, a deal between two or more people or organizations to do certain things.
— Arts + Law article

Oracle has provided some really awesome documentation on interfaces. So, please check out the following links and look around.

A fun detour is also progress in coding