CodeNewbie Community 🌱 is a community of 12,250 amazing newbies

This blog post aims to teach you about the fundamental concepts of VueJS from a React developer's perspective so that you can use your existing knowledge of components to easily pick up VueJS and add this framework into your skillset.

To get the most out of this post, it’s best if you know the basics of implementing components - especially in React. This includes the 3 primary composable behaviours of components that were mentioned by the React documentation - State, Rendering, and Lifecycle. 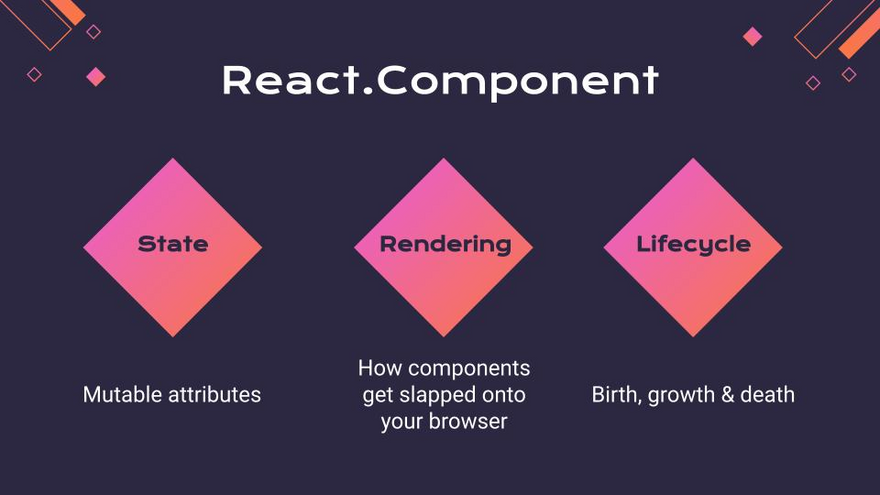 If you're not familiar with the above, you can check out a 5-min article that I previously wrote on Atomic Design for developers to learn the perspective of designing and structuring your components, since Vue is also a component-based frontend framework.

⛳ This is an important topic because VueJS is one of the most popular frontend frameworks. This year in 2021, at the time of this writing, it has more Github stars ⭐ (183k) than the ReactJS library (163k). 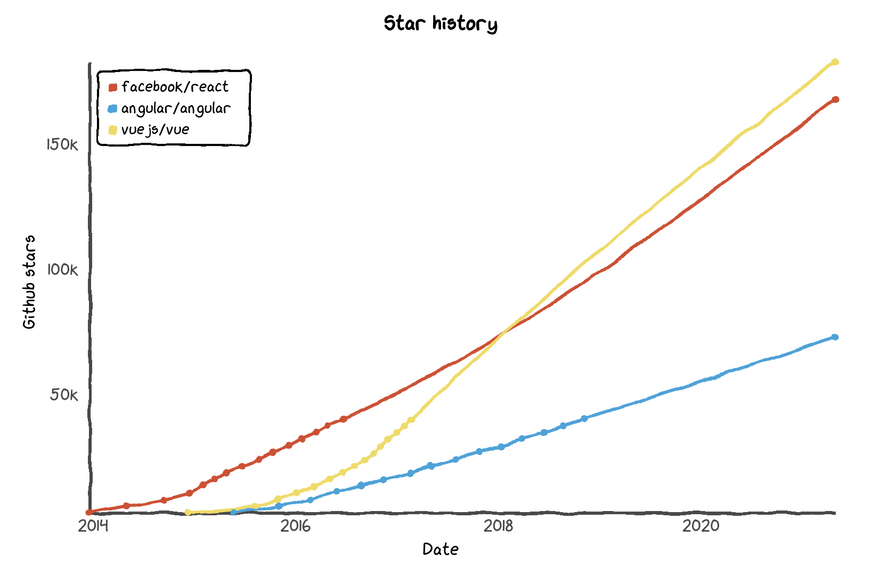 In this article, I assume that you are already sold into the idea of learning a new framework, and that I do not have to go in depth into the detailed comparison between the pros and cons of the two frontend frameworks. Although if you are still keen in the compound benefit analysis of the frameworks, you can refer to the links that I have provided in the resources section at the end of the article.

From a pragmatic standpoint, at present, the number of jobs available for React developers is significantly larger than those for Vue. However, that doesn't undermine the value of Vue frontend framework. There are companies such as Alibaba, Netflix, Adobe and even Facebook (the creator of React) that uses Vue for their apps. There is also a write-up by a company that has migrated from using React to Vue.

Context on the code examples in this article

You can choose to skip this section and jump to the next if you just want to see the concepts in action already. Otherwise, it will be good for u stay on and understand what exactly is the code that you are reading 😆

For easier signposting of what you are reading, I will be adding the following emojis for its corresponding code:

For React 📘, I'll show you both the Class-based & Functional component code.

Below are some points that are helpful if you are a returning React developer who used to only write class-based components or if you are new to React and only know how to write functional components.

for Vue 📗, I'll show you the single-file component (SFC) syntax for the code examples.

The state contains any mutable data attribute that you want the component to store. For example, it could be a loading boolean attribute, or even a more complicated object like user. Let's take these two things out and set it as a defaultState object.

In React, then you can store the state accordingly depending on whether you are using a class-based component or a functional component.

In Vue, you can also store the state in data().

Previously we defined a default state consisting of a user object & boolean for loading. However, for components to be reusable, they should be like functions→ take in some input and give out some output. In the context of frontend components, they will receive such "input" in the form of props. Props are data values that are passed down from the parent component to the child component.

In both Vue & React, setting your state values to be the same as your props is considered an anti-pattern since it will mean that you are duplicating values - making the source of truth ambiguous. Rather, it is more common to create computed properties based on the props you receive.

An example of a computed property will be:

📗 In Vue, there is a specific computed() method to place such computed properties. You would also need to declare the props explicitly.

With the different methods, at a glance, you would know what this component is intended to do 😄

We will want to change the data that we are storing and showing with component at some point, and the state is typically intended to be mutated with either of these 3 primary conditions:

The 3rd point will be covered in the next section, where you will learn about different lifecycle stages and methods available.

In many component-based frameworks, they prefer to refer to those stages as

In both React and Vue, components have specific lifecycle hooks that you can call so that you can interact with the component at those specific points of mounting, updating and unmounting.

⚠️ Do not fixate on the specific details of the diagrams below, they are there to assist you in understanding each specific lifecycle stage of the component in the respective framework, but you need not memorize or fully understand them. 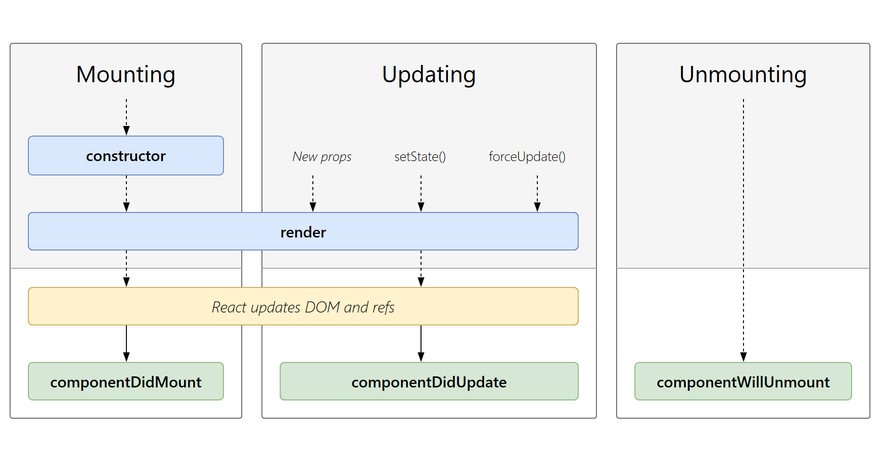 The original Vue Lifecycle diagram can be found here, but it looks very confusing for a beginner so I made one that is simpler, that just comprises of the lifecycle hook methods in red.

Other good to knows

Naming of props, as described by documentation usually follow kebab-case standard, even if you declare a component to be named camel case like <BlogPost />

Thankfully, the rendering portion is quite abstracted for us in both frameworks such that we don't actually need to understand it in depth to make sure that our component renders.

This article has covered VueJS fundamentals in terms of the 3 main component concepts - State, Lifecycle and Rendering.

Remember that there is no silver bullet to everything 💫 , be it the coding style, the programming language as well as the tools available for use. React was once the most popular framework with VueJS trying to take over the lead now, but in future perhaps there's even more shiny new frameworks and tools coming up. As you advance further in learning about frontend frameworks in greater depth, you would start considering the specific use case of your project and trade-offs in deciding the framework. This also brings us to the next point on resources.

Now that you’ve learned about the fundamental concepts of VueJS, take a look at these articles that cover Vue vs React in greater depth to understand better why developers may prefer Vue over React and vice-versa:

And if you're keen in jumping into Vue after this article, the following resources would be helpful:

Thanks for reading the article! This was originally written for #CNC2021, but I stopped writing on it months ago because of work burnout. Still, special credits to @Khloe Brown on CodeNewbie community who helped to vet the article during that period. 🎶

New Out of Box Windows 11 Setup for Front-End Newbie?

AWS professions: All that you really want to be aware

Estee Tey
A gamer, designer and builder. I enjoy thinking about how and why we code.
Simple tutorial to migrate a non-CRA React project to Next.js
#codenewbie #react #tutorial #nextjs
What the FOUC is happening: Flash of Unstyled Content
#css #webdev #codenewbie #react
What is Skeleton Loading and how to implement it in React
#react #webdev #tutorial #todayilearned

Once suspended, lyqht will not be able to comment or publish posts until their suspension is removed.

Once unsuspended, lyqht will be able to comment and publish posts again.

Once unpublished, all posts by lyqht will become hidden and only accessible to themselves.

If lyqht is not suspended, they can still re-publish their posts from their dashboard.

Once unpublished, this post will become invisible to the public and only accessible to Estee Tey.

Thanks for keeping CodeNewbie Community 🌱 safe. Here is what you can do to flag lyqht:

Unflagging lyqht will restore default visibility to their posts.