Since we’re hosting a livestream next week on building a serverless Next.js app with HarperDB and Vercel, I thought it might make sense to do a debrief on “serverless.” We’re starting to see the word more and more, but do we really know what it means or why it’s growing in popularity? Let’s look into this. 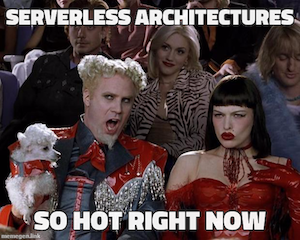 One author states that:

Serverless computing is an execution model for the cloud in which a cloud provider dynamically allocates—and then charges the user for—only the compute resources and storage needed to execute a particular piece of code. Naturally, there are still servers involved, but their provisioning and maintenance are entirely taken care of by the provider.

Serverless architecture refers to a kind of illusion, originally made for the sake of developers whose software will be hosted in the public cloud, but which extends to the way people eventually use that software. Its main objective is to make it easier for a software developer to compose code, intended to run on a cloud platform, that performs a clearly-defined job.

Finally, another author claims that serverless doesn’t really mean one thing, but that it encompasses two overlapping areas. Originally the definition of serverless was a broad generalization, but the term has evolved into a more precise definition like the second point below:

So, serverless doesn’t really mean “without a server.” It refers to software that’s hosted in the cloud, or a stateless container, where the user does not need to worry about management, hosting, or maintenance. Servers are still used, but serverless vendors generally provide backend services that are charged based on usage, instead of charging by a fixed amount of bandwidth or number of servers. In the simplest terms, a serverless system is a way to build an application without having to manage the infrastructure. The overall goal of serverless architectures is to reduce administration and maintenance headaches while enabling increased flexibility and innovation. Sounds like a dream come true! 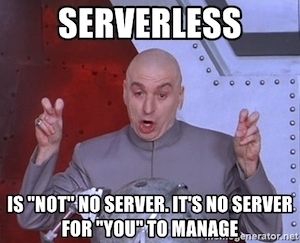 You might be familiar with AWS' serverless service model called Lambda. Or maybe you’re more of an Azure Functions or Google Cloud Functions fan. Vercel is another cloud platform that enables you to deploy serverless functions. For example, let’s look at HarperDB Cloud instance provisioning. We utilize a serverless architecture that uses AWS Lambda functions for instance provisioning, including allocating AWS resources and metadata creation, with backend data services powered entirely by HarperDB. HarperDB utilizes a REST API as the native interface, making it ideal for serverless functions to consume, as connection limits aren't a problem. There are certainly other examples of serverless - just think of any software that runs when called and disappears when it’s done.

As with any technology or architecture, there are pros and cons to serverless computing. Martin Fowler points out that, “Serverless architectures may benefit from significantly reduced operational cost, complexity, and engineering lead time, at a cost of increased reliance on vendor dependencies and comparatively immature supporting services.” This article also provides some great insights, but I’ll summarize from a few different sources below:

Well, there you have it folks! The definition of serverless computing has evolved over the past few years, and Wikipedia currently summarizes it well, as “a cloud computing model where the cloud provider allocates machine resources on demand, taking care of the servers on behalf of their customers.” All in all, as long as each individual team or organization works to understand which serverless architecture or technology is the best fit for their unique goals, it seems that the serverless pros outweigh the cons. However, if you don’t do your due diligence and get locked in with a specific cloud provider, you may end up with high costs and a lack of redundancy. Put in the time upfront for technological decisioning in order to reap the benefits later on.

HarperDB is hosting a workshop on March 23rd where you can build your own serverless application! We are excited to host Lee Robinson, who works at Vercel as a Solutions Architect and leads DevRel for Next.js, for this fun interactive event. Lee will build a serverless Next.js application using HarperDB, and deploy it to Vercel. The application will utilize Next.js API Routes, which get deployed as serverless functions on Vercel, to connect to HarperDB via our REST API. Vercel is a cloud platform for static sites and serverless Functions. It enables developers to host websites and web services that deploy instantly, scale automatically, and require no supervision; all with no configuration. Next.js is an open-source React framework for web development for both server-rendered and static web applications.

All are welcome to this free virtual code along! The event will be followed by Q&A with Lee and the HarperDB team, so bring your questions.

How to create a progress bar with HTML and CSS

Stars For My Project!