cover image by yours truly 😉

I am challenging myself to post about my projects and learning, so here is a project I am working on! Thank you for reading 💛

I am currently working on coding a responsive portfolio website for a fictional photographer. I took a design I created from a previously completed Skillcrush class and decided to turn it into a functional website to practice my HTML, CSS, and flexbox skills.

I have coded everything up, using media queries and flexbox to ensure responsiveness across screens, but the image layout for the tablet and desktop versions is... boring (refer to the image below). 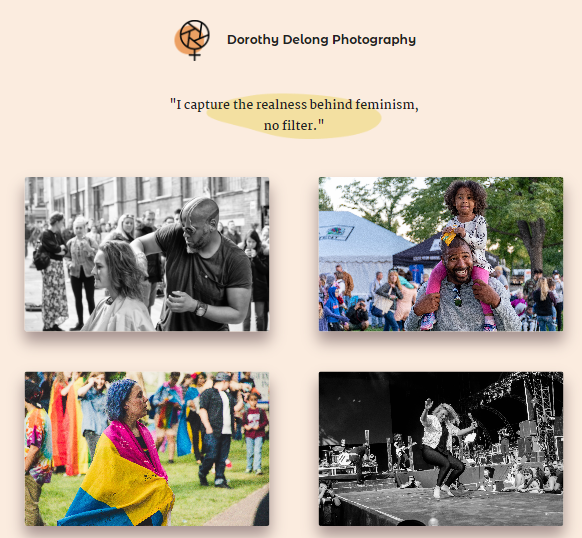 I want to better showcase the images for the portfolio website by applying CSS animations. In addition to learning more about CSS animation properties, I will also be creating a new topic branch in GitHub, which will allow me to practice branching and merging in the command line. This is a valuable skill when working with a team!

I didn't want to add errors to my existing code, so I created a new branch by typing git checkout -b gallery-edits in the command line.

I used overflow: hidden to ensure that the images would stay within the #slider container.

🪄 Now it's animation time! I applied animation: 20s slider infinite to the figure container. This mean that the animation will last 20 seconds, we will name it "slider" (this will be referred to in the keyframes later), and it will never stop.

I'll admit, this part took me a little time to fully understand, but it is a pretty fun and versatile tool once you get it! Luckily, the w3newbie tutorial I was following made it very clear which percentages to use, so I just needed to do some extra research to understand WHY these percentages were used.

@keyframes slider is now referencing back to the name we gave to the animation property earlier. Each percentage in the @keyframes at-rule indicates how the animated element, in this case, the group of images, should render at that SPECIFIC point in the animation sequence.

After playing around with it, I figured out that the 20%, 45%, 70%, and 95% properties create a delay so each image stays still a little longer. The 100% property is necessary in order to create a smooth transition back to the beginning of the animation. I also added another <div> for the titles of each image and applied the same CSS animation: 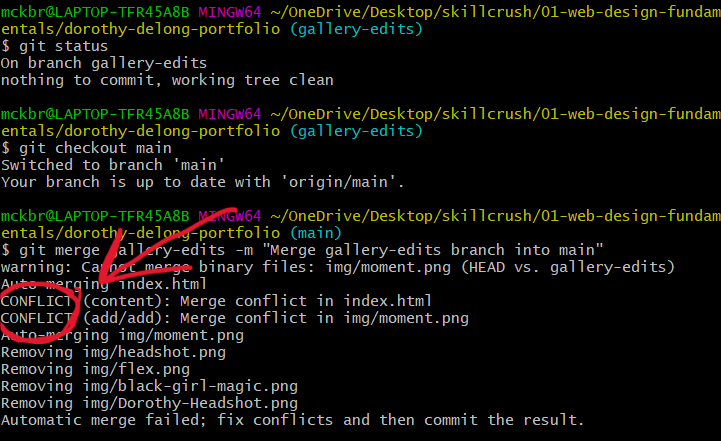 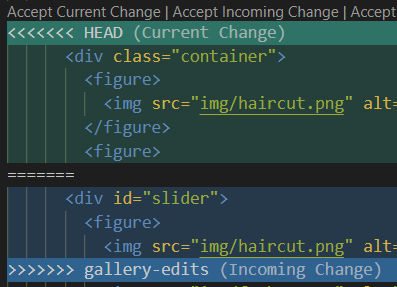 I resolved the conflicts, then added and committed the changes once more. Then, I deleted the gallery-edits branch using git branch -d gallery-edits, as I no longer needed the branch. After that, using git push origin main, I pushed my changes to the main branch.

Honestly, I could have spent A LOT more time on this, even though I started coding the website three weeks ago (I have been doing other things too, I promise!). I am not satisfied with the desktop layout - I might change it later to make both the gallery and the about section side by side, so folks viewing it on a desktop can see it all without scrolling. But I really need to move on, so for now, that's all!

Thank you to anyone who has taken the time to read all of this! Hopefully, writing about my process like this will not only show my learning progress, but will allow me to improve upon my technical writing skills. Bye!

Past lessons from Skillcrush.
This VERY helpful tutorial from w3newbie.
This MDN Web Docs article on CSS animations and keyframes.

Where can I get a white-label NFT marketplace solution?

Once suspended, mckennabramble will not be able to comment or publish posts until their suspension is removed.

Once unsuspended, mckennabramble will be able to comment and publish posts again.

Once unpublished, all posts by mckennabramble will become hidden and only accessible to themselves.

If mckennabramble is not suspended, they can still re-publish their posts from their dashboard.

Once unpublished, this post will become invisible to the public and only accessible to McKenna Bramble.

Thanks for keeping CodeNewbie Community 🌱 safe. Here is what you can do to flag mckennabramble:

Unflagging mckennabramble will restore default visibility to their posts.