In this tutorial we will be using Python to conduct basic data analysis on a World Population data set.

Alternatively, Jupyter Notebook can be obtained by downloading Anaconda which provides many preinstalled libraries.

Next, we will obtain the population data set from datahub.io and save it on our machine. For this tutorial, download the csv file of the data set. Be sure to take note of where the data set is saved.

The application opens in your web browser. First, navigate to the file path where you want to store your work. Then on the top right of your screen click 'New' then under the Notebook heading click 'Python 3'. 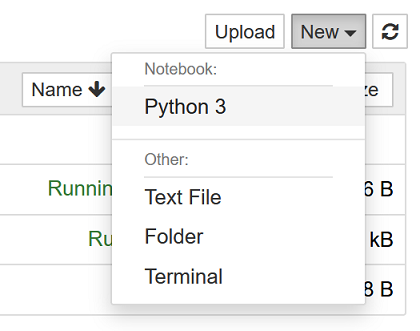 At the top of the screen, we will see that our notebook by default is named 'Untitled'. We can directly click that name to change it to a more relevant title such as 'Population Data Analysis'.

To start off, we want to add a heading to describe what we will be doing in the Notebook. We do this by selecting the drop down and changing the cell type to ‘Heading’.

Next we will add a description for our notebook. We can do this by selecting the drop down and changing the cell type to ‘Markdown’. As we can see, if the text has no # preceding it, the text will display as standard markdown.

We can use a level 2 subheading to label a subsection of our Notebook.

For the next cell we want to add a brief description of what we’re doing next using 'Markdown'. We want to note that we'll import the necessary libraries.

Now that that all our headings and descriptions are set up, we can run the cells and see all the text displayed cleanly.

In the next section of this tutorial, we will begin writing code.

Now we'll import the necessary libraries. Matplotlib and pandas are common libraries used for data analysis. They will allow us to create plots and extract useful information from our data. As we import these libraries, we give them shorthand names such as 'plt' and 'pd' so when we need to call functions from them, we won't need to type out a long name each time. This can be done by using 'as' after importing. After adding a new cell, the type should be changed to ‘Code’.

Make sure to run each cell as you go so the code can continue to execute successfully.

Next, we’ll read in the csv file and display some rows. Make sure the file path is the location where population_csv.csv is saved on your machine. Continue to add comments using markdown as you go at your own discretion. I'm using the name 'popData' to label the data set.

The line below returns the type of all the information in the data set.

The next line provides basic statistics.

If we want to select only certain rows for display, we can do that with the following. In this case we are displaying the 'Country Code' and population 'Value'.

To plot the data for a specific country we'll need to create a table with data only specific to that country. A table is also known as a DataFrame in pandas. The data set lists country after country and we want to have only the data for Zimbabwe. We can filter the country name for Zimbabwe with this line of code.

The graph looks great, but it's not very descriptive. We can add labels to the graph to make sure our data is clear for anyone who looks at it.

The expected code execution is located here for reference.

Now you know how to create a Jupyter Notebook, read in a csv file, and perform basic data analysis. In the upcoming installments, you'll learn how write more streamlined code, more ways to filter data, and plot multiple lines on the same graph!

Once suspended, nehamaity will not be able to comment or publish posts until their suspension is removed.

Once unsuspended, nehamaity will be able to comment and publish posts again.

Once unpublished, all posts by nehamaity will become hidden and only accessible to themselves.

If nehamaity is not suspended, they can still re-publish their posts from their dashboard.

Once unpublished, this post will become invisible to the public and only accessible to Neha Maity.

Thanks for keeping CodeNewbie Community 🌱 safe. Here is what you can do to flag nehamaity:

Unflagging nehamaity will restore default visibility to their posts.