The interest shown in the first lesson and the discussions that followed, as well as the wonderful work that visitors began to draw and post in the comments, showed that it was still necessary to start from the basics. I am correcting the error and suggesting a kind of prequel in which we will get acquainted with the basics of pixel art before proceeding to isometry.

But first, a little history (do not tolerate long introductions? Feel free to skip two or three paragraphs). 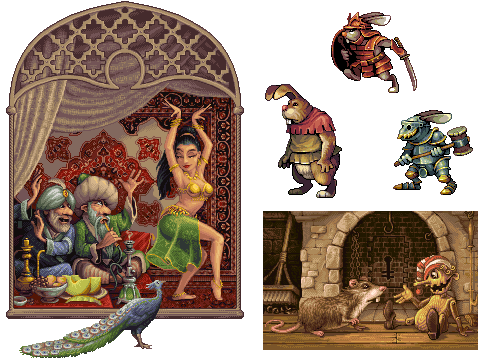 Pixel art (written without a hyphen) or pixel art is a digital art direction that consists in creating images at the pixel level (i.e., the minimum logical unit that makes up an image). Not all raster images are pixel art, although they are all made up of pixels. Why? Because in the end, the concept of pixel art includes not so much the result as the process of creating an illustration. Pixel by pixel, and that's it. If you take a digital photo, greatly reduce it (so that the pixels become visible) and claim that you drew it from scratch - this will be a real forgery. Although there will certainly be naive simpletons who will praise you for your hard work.

Now it is not known exactly when this technique originated, the roots are lost somewhere in the early 1970s. However, the technique of composing images from small elements goes back to much more ancient forms of art, such as mosaics, cross-stitching, carpet weaving and beading. The very phrase "pixel art" as a definition of pixel art was first used in an article by Adele Goldberg and Robert Flegal in the journal Communications of the ACM (December 1982).

Pixel art has received the widest application in computer games, which is not surprising - it made it possible to create images that are undemanding to resources and look really beautiful at the same time (at the same time, they take a lot of time from the artist and require certain skills, and therefore imply good pay) . The heyday, the highest point in development, is officially called video games on consoles of the 2nd and 3rd generation (early 1990s). Further progress in technology, the appearance of first 8-bit color, and then True Color, the development of three-dimensional graphics - all this over time pushed pixel art into the background and third plans, and then it completely began to seem that pixel art had come to an end.

Oddly enough, but it was Mr. Scientific and technological progress, who pushed pixel graphics to the last positions in the mid-90s, and later returned it to the game - revealing to the world mobile devices in the form of cell phones and PDAs. After all, no matter how useful a newfangled device is, we all know that if you can’t at least play solitaire on it, it’s worthless. Well, where there is a screen with a low resolution, there is pixel art. As they say, welcome back.

Of course, various retrograde elements played their role in the return of pixel art. modern graphic beauties (and sometimes, though rarely, simply not able to implement them in their own projects), that's why sculpting pixel art. But let's still not discount purely commercial projects - applications for mobile devices, advertising and web design.

So now pixel art, as they say, is widespread in narrow circles and has earned itself a kind of art status “not for everyone”. And this is despite the fact that for a simple layman it is extremely accessible, because in order to work in this technique, it is enough to have a computer and a simple graphic editor at hand! (the ability to draw, by the way, also does not hurt) Enough words, get to the point!

What do you need to create pixel art? As I said above, a computer and any graphic editor capable of working at the pixel level is enough. You can draw anywhere, even on the Game Boy, even on the Nintendo DS, even in Microsoft Paint (another thing is that drawing in the latter is extremely inconvenient). There are a great many raster editors, many of them are free and functional enough, so that everyone can decide on the software on their own.

I draw in Adobe Photoshop because it's convenient and because it's been a long time. I won’t lie and tell, mumbling my false teeth, that de “I remember Photoshop was still very small, it was on the Macintosh, and it was with the number 1.0” There was no such thing. But I remember Photoshop 4.0 (and also on a Mac). And so for me the question of choice never stood. And therefore, no, no, but I will give recommendations regarding Photoshop, especially where its capabilities will help greatly simplify creativity.

So, you need any graphics editor that allows you to draw with a tool in one square pixel (pixels can also be non-square, for example, round, but we are not interested in them at the moment). If your editor supports any color set, great. If it also allows you to save files - just great. It would be nice to know how to work with layers, since when working on a fairly complex picture, it is more convenient to decompose its elements into different layers, but by and large this is a matter of habit and convenience.

Shall we start? Are you probably waiting for a list of some secret tricks, recommendations that will teach you how to draw pixel art? And the truth is, there isn't much of it. The only way to learn how to draw pixel art is to draw yourself, try, try, don't be afraid and experiment. Feel free to copy other people's work, don't be afraid to seem unoriginal (just don't pass off someone else's work as your own, hehe). Carefully and thoughtfully analyze the work of masters (not mine) and draw, draw, draw. Several useful links are waiting for you at the end of the article.

Creating a firework effect with CSS

How to Run an Effective End of Season Sale