For the first lab in this series, let's examine authorization. Firebase handles all of the authentication. But say, we only want certain Google-signed-in people to use our app.

As a quick refresher:

For today's lab, let's pretend we're building a new "blogging" website. You've looked at WordPress, Blogger, and Forem, but are deeply unimpressed. You want a free solution that you can host on your own GitHub pages (or Firebase hosting) but you want the backend data to be housed in Firestore. Again, the key here is free. You want to share your very important thoughts with the world but only if you can do so without spending a penny.

This is a very glorious goal-- but before we get to the fun part (working on the editor), we need to figure out an authorization scheme. Like all projects, let's start with something super-simple and then slowly build on top of it.

To begin, let's say you simply want to set up an authorization scheme that lets some people read your content (eg. you, your SO) and bans everyone else. For this first lab, let's build private blog.

What are some ways we could accomplish this? Let's dive in!

(First: A quick note about how I decided to write this series. Online, I've generally found many "how-to" guides that are plenty informative and spectacular. In particular, the formal documentation and videos that the official Firebase team regularly puts out is probably among the best I've ever seen.

However, I know when I was a beginner and first learning a new platform or technology, often times I went down many rabbit holes and often did things the wrong way. I'm guessing I'm not unique but online, I've generally found that people only share "the right way" to do things.

So, what I think is edifying, is demonstrating "the wrong way" to do things. (And in programming, as an aside, people often call these "antipatterns.")

Anyway, if you're uninterested in learning what not to do, you can simply skip to Part II.

Alright, to get started, go ahead and clone this firebase-learning repo to your local working directory:

Build the project (gotta compile all that dynamic code!) and then start the emulators. Make sure to import the mock data I've set up for lab01. Ie.

Once the emulator GUI pops up, you can navigate to it and poke around. For those just following along though in bed or waiting in the IKEA checkout line, here are the screens you'd see: 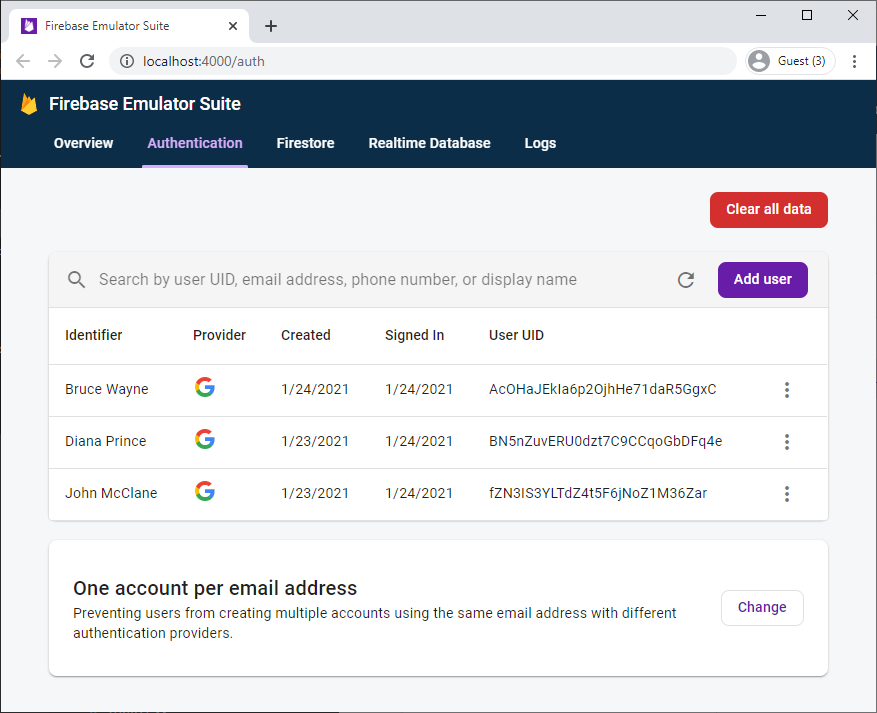 In our fictional universe here, John McClane is married to Diana Prince and they're trying to set up a private blog for themselves using Firebase that only the two of them can access. Ie. If Batman tried to sign in, he should get the boot.

Authorization by checking emails in an array 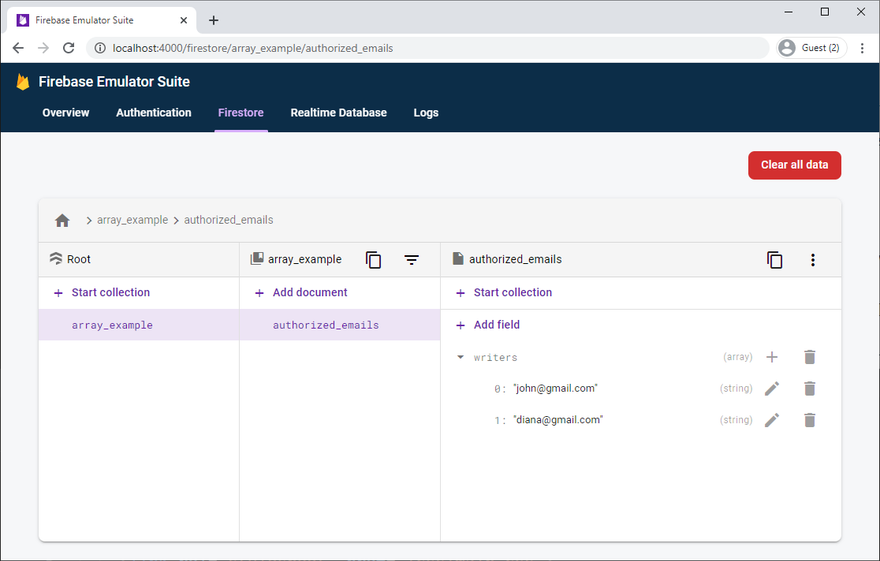 Let's give it a whirl: 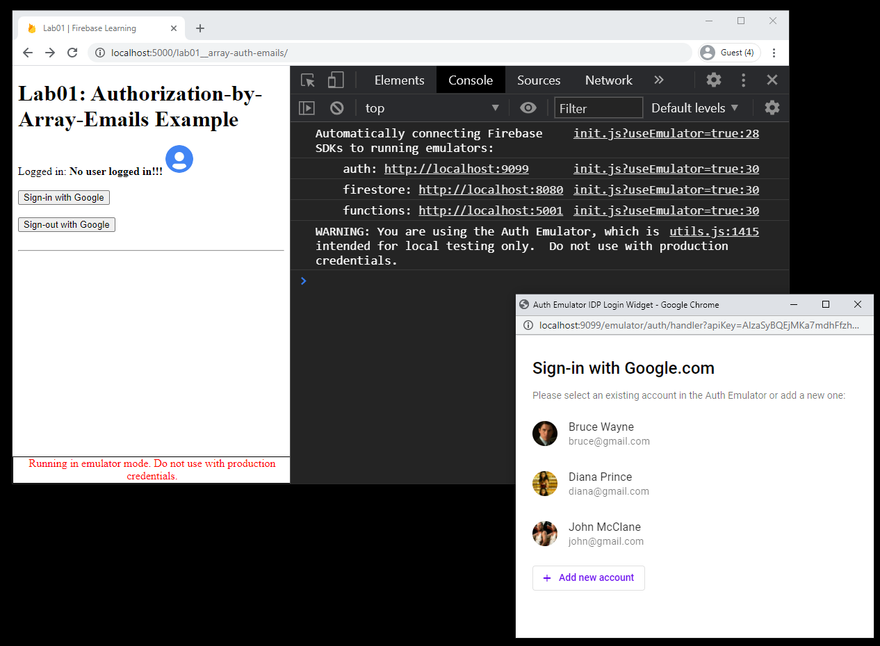 As expected, Diana logs in fine: 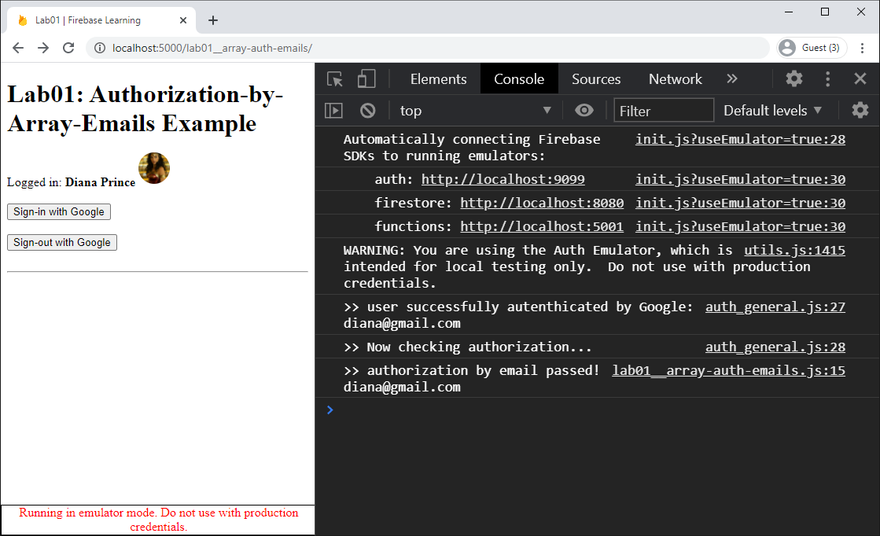 But Bruce gets rejected: 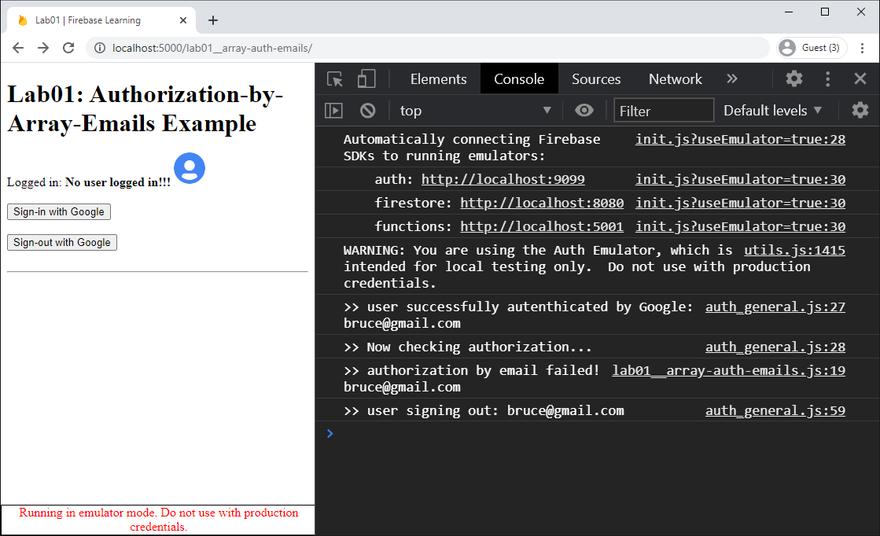 And we're finished! Mission accomplished! This authorization scheme technically works and while it may not win the Nobel Prize or impress anyone at Black Hat, it does get the job done. And intuitively, if you're 100% new to programming. I think this is probably be the first approach you might be tempted to take. And if you're just working on a simple, personal weekend project, you might even call it a day. Things to do! People to meet! MVP! Etc. I totally get it.

But let's consider some pitfalls with this design. There are several, but I think the most intuitive one is:

What if Diana or John changes their email addresses?

Authorization by checking uids in an array

Remember, the way we have it set up is keeping a list "authorized emails". And while it does happen once in a blue moon (seriously, when was the last time you changed your personal email address?), it is possible. Thus, your next gut-instinct move may be to maintain an array of uids. This totally works! To save you some time, I've gone ahead and set that up quickly too. It looks like: 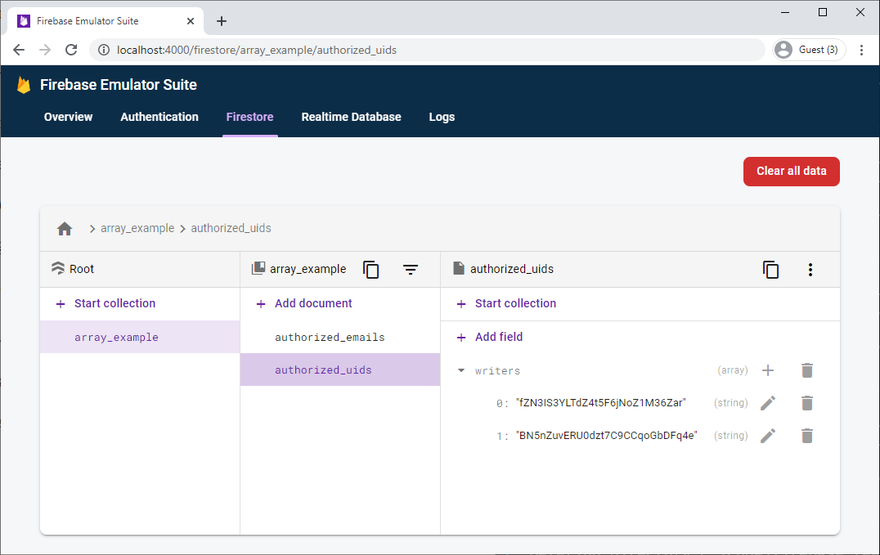 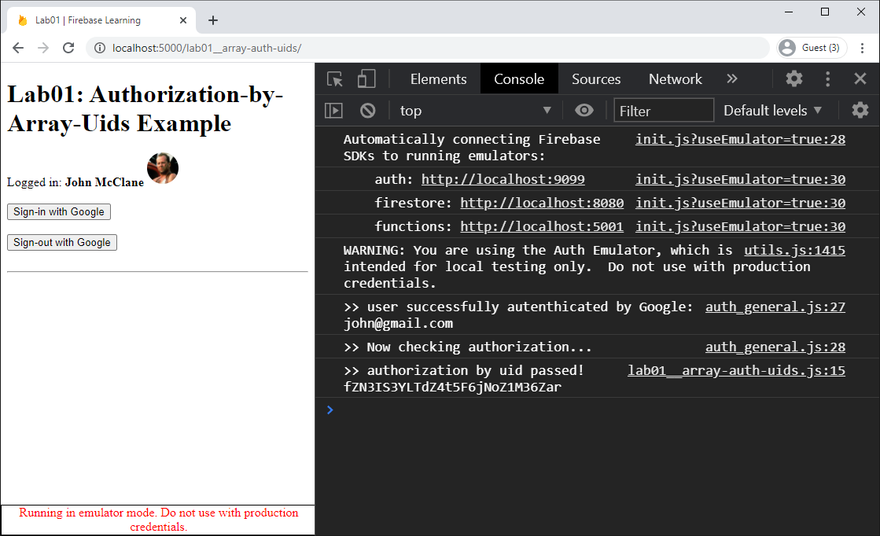 So, this is better. Additionally, with this design-- you've just accidentally implemented what people call "security by obfuscation". That uid that Firebase generates is opaque. Meaning: It means nothing and is in no way connected to the underlying user (John McClane). In other words: It's not an email address and can't be spammed.

One advantage of this design is that if your Firestore data (ie. the authorized_uids document of array_example collection) is compromised (more on this shortly), the hackers only steal a list of uids. And while that's bad, these opaque uids can simply be discarded and re-generated. Whereas if those hackers made away with raw email addresses-- well, that's going to be a much tougher conversation with your users! ☹️

Generally, even in the most secure of systems, hacks still happen. Therefore, whenever possible, if you ever have a choice like we do here: "emails" or "uids"? Always pick the more secure one, especially if it costs you nothing.

Finally, let's examine some other pitfalls of this system:

Part II: What to actually do.

Alright, now we've spent all of that time describing what not to do, let's go ahead and take a look at two examples that could serve you well:

Option One: Check to see if the user exists in an authorized collection.

Use "exists(...)" to see if a user is a member of an authorized collection. If the user's uid exists in that collection, authorize access. If not, give the boot. It looks like this: 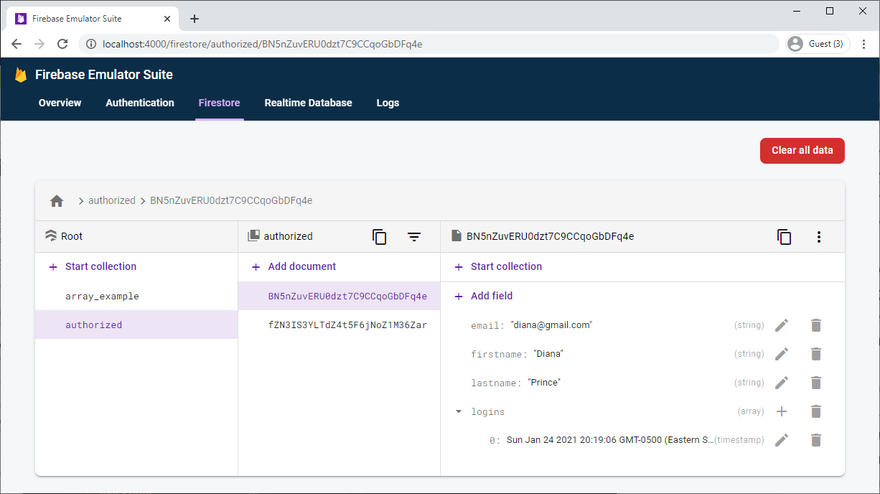 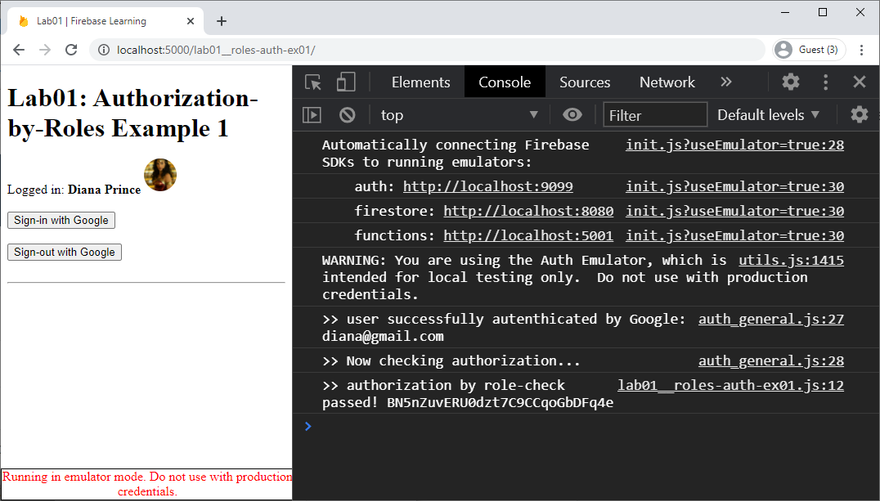 So this approach is simplistic and definitely gets the job done. Our data is now also structured in such a way that allows us actually write Firestore rules for them.

For our example, this binary authorization scheme (in or out?) is perfectly adequate. But let's now take it one step father.

Option Two: Check the user's role in the authorized collection.

Consider a traditional blogging app which often needs more granular authorization schemes. Often times, you'll have roles in your app. In a blogging app, it could be reader, writer, and admin:

In the official Firebase documentation, they call this Role-based access and it basically explains everything you need to know.

Just for the sake of completeness though (OCDs gotta OCD!) let's go ahead and take a look at one right way of doing it with role-based authorization: 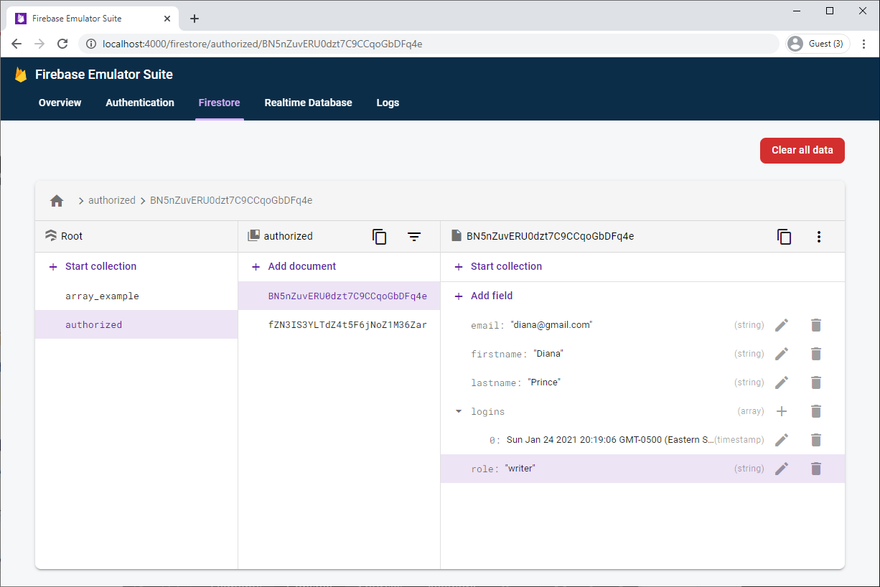 Notice we have now given Diana a role of "writer" as an attribute.

Which on the UX yields, as expected: 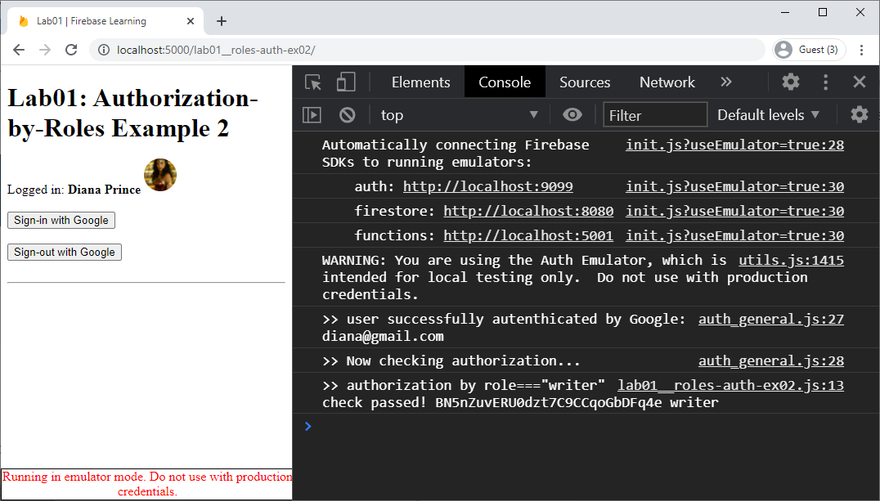 And that's it! Role-based authorization implemented! If you have any comments or feedback, please let me know in the comments below. Again, I'm just learning Firebase myself. And also this is my first tutorial that I've ever posted. Hopefully, you found it useful! If there's anything you're specifically curious about, let me know and I can possibly investigate and write about it next. (Haha, after I learn about it myself!) Must admit, writing this all up was strangely satisfying. Until next time! Happy coding! ❤️👍🖥️

DOs and DON'Ts of Product Discovery